Inspiring then, inspiring still: a hymn of praise to Patti Smith 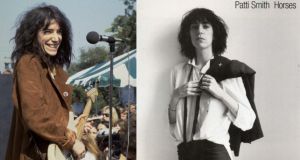 The photograph was in black and white, very plain, almost stark, like a still from one of those cool French movies. It was taken by Robert Mapplethorpe, though I wouldn’t have known who that was ...The record was Horses by Patti Smith. In 40 years of buying records, it’s the only one I ever bought for its cover.

I remember the moment she came into my life. September 20th, 1978. It was my fifteenth birthday and an aunt who lived in London had sent me ten pounds as a gift. I was in a grungy little record shop on the north Liffey quays, Freebird records, an evocative place. Dark, a bit dank, populated by aesthetic hipsters and wisecrackers, it reeked of rising damp, patchouli oil and rebellion. There I stood, leafing through the racks of second-hand punk records, with their lurid neon imagery and blackmail style lettering, when my fingertips came to a sleeve that stopped me in my tracks.

The photograph was in black and white, very plain, almost stark, like a still from one of those cool French movies. It was taken by Robert Mapplethorpe, though I wouldn’t have known who that was. It showed a skeletally thin, slightly androgynous looking young woman. Was this a woman? You couldn’t be sure. Lionly eyes, jacket over the shoulder, self-possession glowing, she had the raffish air of a young Keith Richards about to embark on a night debauching debutantes. The record was Horses by Patti Smith. In 40 years of buying records, it’s the only one I ever bought for its cover.

In the 1970s, you didn’t see young women presenting themselves like this. On the covers of the Top of the Pops anthologies that my friends and I used to buy, young women simpered and grinned in their crochet bikinis. Patti wasn’t a bikini kind of girl, you felt. In the event that she had ever been on a beach – something that seemed unlikely – you felt she’d have been beating up skinheads who had kicked sand in her face, or knocking back absinthe with young poets.

To be honest, I didn’t expect very much from her music. Introspective and dull, I imagined. But when I took that album home and put it on my parents’ record player, the world burst into life like a fruit.

In every life there are moments remembered in a kind of emotional slow motion. A first kiss, a first date, the first time your heart was broken. The moment when your eyes met across a crowded party and you knew this feeling must be the one they sing about. Well, the first time I heard Patti Smith’s voice is one of my moments. If I live to a hundred, I will never forget it.

It opened the record the way dynamite opens a safe. It purred like a cello and throbbed like a saxophone. It soared from a whisper to a scream in one beat. It sneered and crooned and lullabied and raged, the most shockingly exciting sound I had ever heard in my life. Joy, defiance, anger, strangeness, here was a voice so soaked in human emotion that it didn’t just thrill. It intoxicated.

The band was on fire. They swept between sixteen-wheeler, guitar-fuelled riffs and louche, low-down, barrelhouse blues. Tight as a whip-crack, they played like they meant it, soaring from climax to climax. I must have played that record five thousand times by now, but it always seems new-minted, from the core of a unique and passionate heart. Kurt Vonnegut once wrote that the only plausible mission of artists is to make you feel grateful for being alive. That’s what Horses does.

There are people who feel that fandom is limiting or even demeaning to the fan. But in the case of my love for Patti Smith’s music, it was a joyous liberation and an education. Listening to her was a crash course in the outsiders of art: Verlaine, Rimbaud, The Who, Bessie Smith, Jackson Pollock and Jimi Hendrix were only some of her references. More than a touchstone, she was a teacher and a guide. I read everything she said, studied everything she did. But I never felt enslaved to anything but a curiosity, the admiration we feel for great artists. Like my other idol, Bob Dylan, Patti enriched you. She, like Dylan, had started out a fan herself, and at the heart of her music was the wide-eyed innocence of a teen.

This year she turns 69. Her live performances are still explosive. I last saw her perform a year ago in New York, and I was floored by the energy and the commitment. She is no jaded 1970s dinosaur still going through the cliches, but a passionate true believer. Singer, photographer, acclaimed writer, mother, she has inspired several generations of artists by now, and the influence keeps on extending. One of the few truly important figures to emerge from the punk movement, she defies all lazy categorisations.

Writing a book is hard. You need to keep inspired. My eighth novel, The Thrill of it All, a story about an English-Irish rock band, aspires to be a love-song to the unique role that music, the sweetest of all art forms, plays in our lives. Music is how we remember, how we imagine, how we dream. We all of us have a soundtrack, a songbook of our own, containing snatches of melody and half-remembered lyrics, the poetry that added taste to life. And I know there was a guiding presence as I wrote this book: the memory of how it felt to first experience the full power of music unleashed. That blessing was given me by Patti Smith’s Horses. Without it, The Thrill of it All would never have existed. She appears as a character in the book, as do many other musicians, because they appeared first as characters in my heart. In a way, it’s the novel I started writing on my fifteenth birthday, when all the world was young.

If you have a question for the author, email bookclub@irishtimes.com

The series will culminate with a podcast of Joseph O’Connor in conversation with Martin Doyle, Anna Carey and Sorcha Hamilton, which will be pre-recorded in front of a live audience in association with the Irish Writers Centre, Parnell Square, on Wednesday, September 2nd, at 7.30pm. The recording will be followed by a Q&A and there wilbe live music. Admission €5, €3 concessions, to include a glass of wine. http://irishwriterscentre.ie/