In the Name of Love review: the marriage equality movement in Ireland

In the build-up to a spring referendum on same-sex marriage, this stirring oral history honours those gay and straight activists who resisted the ‘mind-clamp of prejudice’ 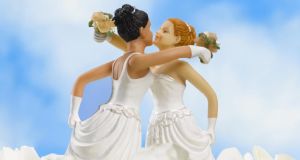 Book Title:
In the Name of Love The Movement for Marriage Equality in Ireland An Oral History

The human faculty of imagination plays a central role in making history, and in sparking and sustaining social movements. Never has this been the case more than in the Irish movement for marriage equality in Ireland – a term unknown in the Irish lexicon 15 years ago.

The cultural context for this oral history by the Irish Times columnist Una Mullally is Roman Catholic Ireland. So what has happened and what is happening in Ireland that is shattering presuppositions about how a Catholic country, in the past so wedded to traditional doctrine and morals (as exemplified in the preamble of Bunreacht na hÉireann), thinks about marriage today?

Mullally appropriately chose an oral-history method to gather, preserve and interpret the voices and memories of people, communities and participants of an evolution in consciousness about how equality belongs to love. Interviewing more than 100 people, she concludes her introduction by observing: “There are a lot of dark corners in Irish history, but there are always opportunities for brave people to emerge from the shadows. This book is about brave people.”

Ross Golden-Bannon, a board member of Marriage Equality, recalls the darkness of those shadows.

“What really struck me about the campaign for marriage equality is how enormously different my life would be now if when I was growing up and when I was a teenager I shared a positive vista of my life like all my straight friends did . . . They knew they were going to get married and have kids and settle down. And when I looked ahead I never saw that . . . I never had that long-term vista of stability to look forward to. And that’s damaging. The achievement around marriage equality in Ireland means that other kids won’t grow up with that. That’ll be gone forever.”

I arrived on Irish soil in 1983, following Ann Louise Gilligan, my life partner and now spouse, back to her home in Dublin from where we met, at Boston College, where we pursued a doctorate together.

That was the year David Norris lost his Supreme Court case to have male homosexuality decriminalised in Ireland, only eight months after Declan Flynn, perceived to be gay, was beaten to death in Fairview Park, in north Dublin, by four teenagers. It was also the year that the Eighth Amendment to the Constitution was approved by the people.

Mullally initiates her oral history during this period and charts the thoughts, fears, strategies, conflicts and imaginative actions of lesbian, gay, bisexual and transgender people. They were the ones who rose up to resist the stasis of harmful traditions and the mind clamp of prejudice against nonheterosexuals. The words of heterosexual politicians, policymakers, family members, journalists and activists who participated in the historymaking are also recorded.

The Irish Times journalist Kathy Sheridan, for example, recalls how her positive perspective was deepened by the power of the human-rights argument as she covered the KAL case. “KAL” stands for “Katherine and Ann Louise”, and it was inscribed on our life-partnership rings more than three decades ago.

In 2003 Ann Louise and I married each other in Vancouver. In 2006 we took Ireland to the High Court because it refused to recognise our marriage. Sheridan comments on the reasoning of our senior counsel, Michael Collins: “He argued that these women were denied the right to marry each other while all sorts of people could marry whoever they like. I remember being so struck by the simplicity of that sentence.

“Also, a final question he asked was begging common sense: what was the interest of the State in preventing these people from marrying?”

Fianna Fáil, Labour, the Greens and the PDs featured prominently in the legislative wrangling to bring in civil partnership for lesbian and gay men, as an alternative to what is perceived as the unconstitutional right to marriage for nonheterosexuals. The advocacy organisation Gay & Lesbian Equality Network took centre stage in leading towards a successful parliamentary vote for civil partnership. The chapter “Marriage Equality: A New Organisation, a New Movement” depicts the work of a highly effective group of board volunteers and a small staff to change the hearts and minds of the Irish people towards acceptance of marriage for everyone, through imaginative storytelling and communications about the ordinary lives of lesbian and gay couples and families.

The spontaneous and improvisational origins of LGBT Noise – the organisation that promotes civil partnership and other equality issues – and the ways its organisers built the joyous and efficacious annual March for Marriage to include thousands of participants demonstrate how the quality of perseverance is integral to the power of the imagination.

Anna MacCarthy, the Noise organiser, remembers their first gathering. “Thinking back to outside the Central Bank, where there was 30 people, it was like, ‘Oh my God, why are we bothering? Is this actually going to go anywhere?’ ”

Divisions erupted within the movement, and Mullally deftly allows the principal actors to speak about it for themselves. No doubt there are things left unsaid or unrecorded. But the reader is left with an overall picture of the advocates’ determination to keep their eyes on the horizon of the Irish people saying yes to equality, and this imaginative act catalyses a unity of purpose time and again.

Rory O’Neill, aka Panti Bliss, rises in the history as a prime leader who calls people out – “What is the spark that will finally light a fire under you?” – and urges people to put aside differences so that no one, ever again, experiences homophobia: “We need to be our own spark.”

Mullally’s book is required reading for the months ahead. This spring the Irish people will be asked, via referendum, if the Constitution should allow civil marriage for same-sex couples. When the Convention on the Constitution voted to recommend this to the Government, David Farrell, the convention’s research director, recalls, “There was just silence. Everyone just stopped. It was amazing. It was incredible.”

Taoiseach Enda Kenny has promised that he will campaign for it. The tallyman (and Irish Times columnist) Noel Whelan predicts that “you need to persuade a million plus people.”

This can be done. If the referendum passes, Ireland stands poised to become a beacon of freedom throughout the globe.