In the belly of the beast: The Gestapo – Power and Terror in the Third Reich 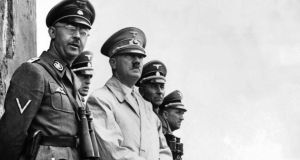 Third Reich: Heinrich Himmler, head of the Gestapo, stands next to Hitler to watch a parade of Nazi storm troopers in 1940. Photograph: CIA/Reuters

Book Title:
The Gestapo: Power and Terror in the Third Reich

For the victims of Nazi terror the experience of arrest was often similar: it began with a heavy knock on the door in the early morning hours. Plain-clothes policemen would then drive the “suspects” to an unknown destination where they were usually interrogated under torture. If found guilty of whatever “crime” they had been charged with, they would either be executed or sent to a concentration camp.

The organisation responsible for these kinds of actions requires little introduction. To this day the Gestapo (or Geheime Staatspolizei) is known throughout the world as Hitler’s much-feared political police force, an organisation synonymous with the regime’s terror against those perceived as its mortal enemies: socialists, communists, Jews, homosexuals, Gypsies and “habitual criminals”. Between 1933 and 1945 tens of thousands of these “enemies of the Reich” were arrested, tortured and often murdered. Most of those who were sent to concentration camps were never seen again.

Given the general public interest in the history of the Third Reich and the centrality of the Gestapo to Hitler’s domestic regime of surveillance and terror, the relative scarcity of accessibly written books on the topic is remarkable. Although we have a great number of specialist studies on how the Nazis’ political police operated in individual cities or regions, a synthetic overview that summarises the most important research in the field in an accessible way has long been missing.

In their recently published book on the subject, the German historians Carsten Darms and Michael Stolle set out to fill this gap in the literature. They succeed in providing a well-informed, if at times too dryly factual, history of the Gestapo.

Darms and Stolle start their account with a section on the origins of the organisation, which long predated Hitler’s ascent to power. In the Weimar Republic, a federal democracy founded in November 1918, all German states maintained political-police formations of various sizes, designed to keep an eye on the activities of anti-republican extremists.

In 1933 Hermann Goering gained control of the Prussian police and transformed the Gestapo into an executive tool for the Nazis’ ambition to crush all opposition. Under Goering the first improvised concentration camps in Germany were set up, mainly in order to intimidate the initial victims of Nazism: the communists. Many of the Gestapo’s former (non-Nazi) employees remained in place unless they were deemed politically suspicious, but key posts in the local Gestapo offices were increasingly given to a younger cohort of reliable right-wing university graduates, mainly with degrees in law.

In 1934 the political-police formations in Germany were gradually taken over by the Schutzstaffel, or SS, and finally, in 1936, united under the centralised command of Germany’s new police chief, Heinrich Himmler. Himmler had made a name for himself in Bavaria, where, in contrast to the noisy street violence of the Sturmabteilung, or SA, political prisoners were tortured and killed “in silence”, notably at the newly established and soon notorious Dachau concentration camp. By the beginning of the second World War the Gestapo had been absorbed into a new and much-feared institution, the Reich Security Main Office (RSHA). The RSHA also included the regular Criminal Police and the sinister SS intelligence service, the SD.

Contrary to the Gestapo’s reputation as an omnipresent and omnipotent instrument of terror, Darms and Stolle successfully demonstrate that throughout its existence the Gestapo remained a tiny organisation incapable of monitoring the vast majority of Germans, let alone the populations living in the occupied territories. Aware of its organisational limitations, the Gestapo leadership consciously created the myth of being far larger and better informed than they actually were. To make up for its organisational weaknesses, the Gestapo relied heavily on the co-operation of ordinary citizens, encouraging them to report the “crimes” of their neighbours or even of family members.

Most frequently, people were denounced for a “crime”that the Nazis had themselves invented in the Nuremburg Laws. After the criminalisation of nonmarital sexual relations between Jews and non-Jews, for example, the former were reported because of alleged “race defilement”; that is, sexual relationships with “Aryans”. So-called block wardens – usually party members who had volunteered to keep an eye on their neighbours in the ubiquitous apartment blocks of larger German cities – were particularly active in denouncing fellow citizens.

Once the leadership of any opposition had been destroyed, the Gestapo maintained a presence in all occupied territories until the end of the war, not only to fight resistance activities but also to support the persecution and deportation of Jews to the death camps farther east.

Even the SS task forces – the notorious mobile killing squads that murdered hundreds of thousands of Jews along the eastern front – were partly staffed with Gestapo personnel. This was in line with Himmler’s conviction that the senior personnel of all SS and police institutions had to prove themselves in the field before being qualified to assume leadership positions in the future.

After Germany’s defeat in May 1945 the Gestapo ceased to exist as an institution. The West German constitution, the Grundgesetz, codified a refederalisation of the police force and a strict separation of all police and intelligence services. Yet those who had served in the Gestapo during the Third Reich did not have to face serious repercussions. Hardly any former Gestapo officers ever stood trial, a dark stain on the history of both the early post-Nazi German judicial system and the Allies’ de-Nazification policies. Soon after the most senior Nazis had been put on trial at Nuremberg, the logic of the cold war kicked in. Former Nazis in the Gestapo were suddenly perceived as “experts” in espionage with valuable knowledge about the Soviet Union. Many of them were consequently hired by the Allies or by the newly reconfigured West and East German intelligence services.

In sketching out the history of the Gestapo from its origins in the Weimar Republic through to the postwar period, Darms and Stolle offer their readers a succinct introduction to the subject while also managing to deconstruct a great number of myths still surrounding the Gestapo in public memory.