In Search of the Irish Dreamtime: Archaeology and Early Irish Literature by JP Mallory review

New truths about ancient myths: an essential modern guide to the development of our ideas about Ireland’s early history, writes Michael Ryan 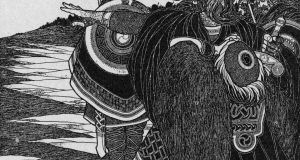 JP Mallory describes this book as a companion to his The Origins of the Irish, from 2013, in which he sketched the emergence in the early medieval period of a people who were recognisably Irish. In that book he briefly examined the legendary history of Ireland as written down in early-medieval times by clerical scholars who prized the vernacular traditions of poetry, myth and legend and gave them an honoured place side by side with the Latin learning of the church.

He returns to that subject in this latest valuable study written in his characteristic accessible and witty style. This reviewer at first sight thought that the title was the wheeze of a publisher anxious to attract new market segments, perhaps even New Age ones. But, no, it is the author’s own choice and he is clearly a little uneasy about its applicability as he writes in his introduction a wise precautionary apology to the aboriginal peoples of Australia for his appropriation or possible misappropriation of their concept of “a sacred time in which both the natural world and human culture and traditions originated and that these beginnings still resonate in the spiritual life of people today”. What this book really is, is a survey and analysis of the construction, in the Early Middle Ages, of an ancient history of Ireland and its people and the grafting of that history onto the Bible and an analysis of the historicity of famous dramatic stories such as the Táin Bó Cuailnge – the Cattle Raid of Cooley.

As Mallory recounts, in early modern times that ancient history got a new lease of life. In the 1630s, the Four Masters, for example, listed major events from about 2958 BC (the Flood) and annual entries were provided from the year 1934 BC to 1616 AD. Geoffrey Keating at about the same time defended the antiquity of Ireland’s historical record but was critical of certain claims. The earliest Irish history was criticised heavily by English scholars and responded to by Irish in the 17th and 18th centuries in a highly politicised debate. The 19th and early 20th centuries saw a complacent nationalist pride in Ireland’s exceptionally long history while at the same time a series of critical editions of manuscript texts and rigorous general studies began to appear. These gradually gave rise to a critical approach to the sources of the earliest essentially fictional matter. Mallory’s is the latest link in a long chain of critical scholarship that has placed the understanding of our ancient pseudo history on a sound footing.

He provides us with a concentrated summary of the major tales of the Mythological and Ulster Cycles, which are the focus of his book. (The stories of Fionn and the Fianna belong to a later phase of composition and are not included.)

He tests them against the evidence of archaeology, language and history in order to establish the context in which the histories and tales were composed and whether they embody genuinely ancient traditions. The deep history of Ireland as set out in the Lebor Gabála (The Book of Invasions) does not stand up in terms of internal consistency or plausibility, and nowhere do its events convincingly echo the evidence of archaeology. (When I was at school the scheme of a first colonisation by Cesair, granddaughter of Noah, and her companions, who all drowned in the flood, followed by successive invasions of Nemedians, Partholonians, Formorians, Fir Bolg, Tuatha Dé Danann and Milesians, was still fairly seriously taught.)

The Ulster Cycle tales are set roughly in the first centuries BC and AD. Can the stories such as the Táin Bó Cuailnge, the boyhood deeds of Cú Chulainn and many more, open, as so many still think, a “window on the Iron Age”? Does their description of the deeds of chariot-riding warriors with a penchant for mayhem and headhunting embody a historical reality? Do their great capitals (Emain Macha and Cruachan – Rathcroghan, Co Roscommon – are most frequently mentioned but Tara is also included) match the descriptions and fulfil the purposes ascribed to them in the ancient stories? Mallory’s answer is a “no” based on the results of excavation and detailed survey. Tara, Emain (Navan Fort, Co Armagh), and Cruachan are places of ritual and ceremony and they by no means fit with the descriptions of the tales.

Mallory patiently examines the descriptions of material culture of the Ulster tales and finds that the best match for almost every aspect is in the early medieval period – swords suitable for beheading with a single blow did not exist in Ireland in the time in which the tales are set but became relatively common in the Viking Age; gold and silver ornaments, dress, shields, other weapons are best matched in the later 1st millennium AD. The burial rite is wrong for the place and time: Ogham inscriptions, belong to the period between c 400 and 800 AD, not to the pre-Christian Iron Age. They are overwhelmingly found in the southwest and south of Ireland and are exceptionally rare in the midlands and Ulster although they are part of a standard description of burials in the Ulster Cycle. Nothing approximating the burial ritual described by the compilers of the tales has ever been found to date to the assumed period of the action. Interestingly, as a form of negative evidence, some quite common prehistoric Iron Age objects connected with weaponry and horse-management are unknown to the compliers of the stories.

This is an essential modern reader on the development of our concepts of the most ancient past of Ireland. Mallory situates the texts that have come down to us in their learned, scholarly tradition from the 7th-8th century onwards: but an equally venerable tradition of secular story- telling must have informed the monastic authors who compiled the myths and tales. The book is formidably referenced and thorough. You may by the end, given the steadfast bloodthirstiness of the warrior-heroes who feature, feel worn out by some hours spent in the company of your less-than-friendly neighbourhood psychopaths but Mallory will be a sympathetic guide.