In praise of Bridget O’Connor, by Martin Doyle

Celebrating Irish women writers: ‘She brought a non-sentimental, unexpected, visceral approach to each scene that made her screenwriting exciting and exceptional. Great movie writers are rare in this country and she was one of them’ 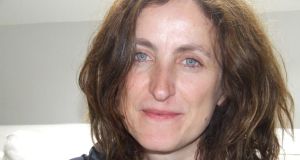 Bridget O’Connor: Tragically, her Bafta for best adapted screenplay, which she won with her husband Peter Straughan for Tinker Tailor Soldier Spy, was posthumous as she died of cancer in 2010 at the distressingly young age of 49. Photograph: Peter Straughan.

Having lived abroad for much of my adult life, I’d like to celebrate an emigrant Irish writer, in fact, the daughter of emigrants. To paraphrase Kipling, what do they know of Ireland, who only Ireland know?

I toyed with the idea of nominating Alice McDermott, one of the greatest chroniclers of Irish-American life – if you liked Colm Tóibín’s Brooklyn, you’ll love what McDermott fashions from her native New York borough. I was smitten by Charming Billy, Someone and, to a lesser extent, Child of my Heart.

But instead I’d like to champion the less well-known but exceptionally talented London-Irish writer Bridget O’Connor, whose writing career began when her story Harp won the Time Out short story prize in 1991, followed by two fast-paced, blackly comic short story collections, Here Comes John (1993) and Tell Her You Love Her (1997), both published by Cape. Postcards, the story of a mother and daughter in rural Ireland, was included in The Picador Book of Contemporary Irish Fiction and A Woman’s Hair in the second edition in 2000.

Her play, The Flags, a black comedy about two unreliable lifeguards on a deserted Irish beach plotting their promotion to Banna Strand, stands comparison to the work of fellow London-Irish writer Martin McDonagh.

She also wrote two funny serials for me at The Irish Post, the first about a London-Irish dancer who became the Rose of Tralee – she would later write a play, Becoming the Rose, for BBC Radio 4, winning the Arts Council’s Write Out Loud award in 2000. The second, Up North, was about a southern softie on Tyneside – at the time she was Northern Arts literary fellow at Newcastle and Durham Universities, where she met her future husband and writing partner Peter Straughan (Wolf Hall). She struggled to make the transition to novel writing and then suffered breast cancer while pregnant with their daughter Connie but recovered and found perhaps her true calling as a screenwriter (Sixty Six; Mrs Ratcliffe's Revolution;  Tinker Tailor Soldier Spy).

Tim Bevan, of the UK Film Council and Working Title, said O’Connor brought “a non-sentimental, unexpected, visceral approach to each scene that made her screenwriting exciting and exceptional. Great movie writers are rare in this country and she was one of them.”

Tragically, her Bafta for best adapted screenplay, which she won with Straughan for Tinker Tailor Soldier Spy, was posthumous as she died of cancer in 2010 at the distressingly young age of 49.

“[The dentist] had alopecia (now that wasn’t fair, was it?), head like a kid’s fight, the damage combed over, his fingers in latex, the smell of new dollies.”
Kissing Time, from Here Comes John (Cape, 1993)

“It was a double whammy. Having a daughter as well, everything changed anyway. The same switch went on – oh, I haven’t got all day suddenly. God, I’d better do some work, not sit round watching breakfast television any more. I felt a kind of electricity – the day is not as long as I thought it was.”
Interview, The Irish Times, 2007

Other favourites: Martina Evans writes sharp and funny novels – Midnight Feast, her Betty Trask Award-winning debut about anorexia in a girls’ boarding school; The Glass Mountain, about student life; and No Drinking, No Doctors, No Dancers, about a woman’s conflict between her sect and sensuality. A radiographer by training, as a writer Evans’s trained eye sees beneath the skin to the heart, soul and humerus. Petrol, which she calls a prose poem but which reads very like a novella, is as fresh and funny as Nina Stibbe’s instant comic classic Man at the Helm, a sharp child’s eye view of adult folly. Her poetry is accessible yet acclaimed – her latest collection, Burnfoot, Las Vegas, is shortlisted for this year’s Irish Times Poetry Now award.

I’d also like to include a fellow Northerner, another outlying group. I’m a big fan of Deirde Madden but I’m going for Marie Jones, who has managed to be both loyal to her locale yet internationally successful with plays such as Stones in his Pockets and A Night in November. People are always banging on about how sporting heroes unite the two communities up north, but Jones manages to pull it off too by actually addressing the bitter issues that divide them, a trickier and more meaningful feat.

Martin Doyle is assistant literary editor of The Irish Times.