In memory of Primo Levi, author and Auschwitz survivor 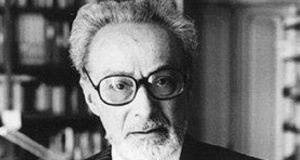 Primo Levi: “My Jewish identity took on a great importance following my deportation to Auschwitz. It is very likely that without Auschwitz I would never have written, and would have given only a little weight to my Jewish identity.” He wrote in order to tell the world what happened. In time he would come to resent the literary world that regarded him not as an artist, only as witness. Photograph: Getty Images

It is an image not easily forgotten; a frail, elderly man sitting in a deep armchair. Strong sunlight fills the room. He holds up his arms as if to ward off the beam, the effort appears to have exhausted him. Light has obscured his glasses. Refraction, is that what it is called? “Hello,” he says, “hello, hello,” aware that someone has entered the small library-like space, but he can’t see, not for the moment. Not until the light fades.

Someone from the publishing house had come to greet me. I was early and the previous interview had not yet finished. A man in a suit was reading through notes and a camera person was waiting. The sound engineer was late. The man with the notes looked up and asked, less to test me than to goad his colleague: “Do you know who is in there? Have you heard of Primo Levi?”

I was not expecting to be spoken to and heard my mumbled reply, something not overly eloquent, along the lines of, “Yeah, wow. The Periodic Table.” It was enough to make the man with the notes smirk in triumph. “See, most literate people would know.” The girl holding the camera equipment had not and it didn’t bother her a bit. The man told me that I should go on in and say hello. “You’ll be glad you did,” he said, sounding slightly less posh and more fatherly. And I was glad, so very honoured to have met Primo Levi. When he asked where I was from, I had to repeat myself four or five times. His hearing wasn’t poor; it was just difficult for me to speak. He seemed like a saint who had walked back from the doors of Hell, which of course he had.

70 years ago today the Soviet Army liberated Auschwitz concentration camp. Primo Levi had been a prisoner there. He had survived for 11 months in a place in which most people died after two weeks because he had a use. He was a chemist and his expertise had kept him alive, working in a lab, devising a method of making synthetic rubber. The futility of having anything worth saying to such a person was overpowering. His skin seemed transparent, paper-like, against the white of his shirt. The camp number was still on his arm and I tried not to stare at it but did.

Although he was a scientist by training and his mode of expression precise, he was elegant and well groomed, slightly dapper. Yet he had an otherworldly demeanour, a kind of purity mingled with unease. Levi lived with guilt, the burden of survival.

He looked very old and for a moment it seemed that we were in a hospital and not a smart London hotel, one favoured by publishers for their important visiting authors. Later, exactly one year to the day later, on April 11th, 1987, he fell or jumped to his death, aged 67, not as old as he had seemed that day.

So Levi at 66 had asked me if I was Jewish and on hearing no, he smiled and said that the Jewish community had always criticised him for not being Jewish enough. “I see myself as Italian, or at least I did before.” It was obvious what he meant by “before”. He had been born into a middle-class Jewish family in Turin in 1919, his parents were cultivated his mother was well educated and spoke French. She and Levi’s father had been happy at first but eventually drifted apart and she spent more time in a country villa while Levi’s city-loving father remained in Turin and pursued his various affairs.

It is too easy to think of a Holocaust survivor as someone who never had a life before the world fell asunder. The survivor becomes the focus of interest for the rest of us as we attempt to make sense of the madness and the suffering.

Levi had been an academic boy, shy and awkward with women. He was drawn to science, not literature. His favourite subjects were chemistry and astronomy. Chaos could, it seemed, be controlled by science. This proved not to be so. He had loved hill walking. What happened to him because of his religion had seemed ironic; he was an atheist. Italian Jewry was highly assimilated. Religion to him was merely incidental. It was not until the Italian Fascist regime imposed race laws in 1938 that Levi realised that he was Jewish. Being Jewish suddenly affected his ability to find work as a chemist. It determined his fate and ultimately caused him to become a writer.

“My Jewish identity took on a great importance following my deportation to Auschwitz,” he wrote, “it is very likely that without Auschwitz I would never have written, and would have given only a little weight to my Jewish identity.”

He wrote in order to tell the world what happened. In time he would come to resent the literary world that regarded him not as an artist, only as witness.

Captured by Fascist militia, he was deported from Italy and arrived at the death camp in Poland where he spent 11 months. On arrival there he spoke some German and set about learning the language. After the liberation of Auschwitz he was not actually free. Instead there was a terrifying further chapter to the horrors of the camp. It came in the form of a trek across Europe from Belorussia, now Belarus, through the Ukraine, to Romania, Hungary, Austria, Germany and finally back to Italy, to the Turin apartment in which he had been born and would later die. His wife listened to his stories but neither of his children ever asked him anything about his experiences. Instead the world was to listen.

The writing began with If This is a Man (1947; 1958), followed by The Truce (1963), The Periodic Table (1975) and The Wrench (1978). The success in 1984 of the English-language edition of The Periodic Table, endorsed by Saul Bellow, introduced Levi to a wider audience. It was a belated success and with it came the accusations of the international Jewish community, expecting a more Jewish persona. Far more important was the awareness of the suppressed anger in the work. Levi wrote with a calm assurance; his fury was subtle if unmistakable.

The story he tells is his own and he spent his writing life telling and rewriting that story. If This is a Man is a memoir; The Periodic Table is a harmonious merging of science and art. It is divided into 21 chapters, each named for an element from chemistry’s periodic table, which are ingeniously seen to have inspired a narrative, usually a moment recalled, an incident, anecdote, or in some instances – as with the “mineral tales” of lead and mercury – a fictional interlude.

Levi addressed the reader directly. He often summons a person from his past with humour, pathos and disarming simplicity without floundering into sentimentality. His grandmother, Malia, “who survives in the figure of an overdressed, tiny vamp in some studio poses executed around 1870, and as a wrinkled, short-tempered, slovenly and fabulously deaf old lady in my most distant childhood memories’’. Others include a dignified old cobbler; a boyhood friend “whose dreams were sensible” and then there is Sandro, the doomed resistance hero. Levi describes the universal Jew as “somebody who at Christmas does not have a tree” and recalls the racial laws and their impact on is Christian classmates who “were civil people….but I could feel them withdraw.’’ In Carbon he charts the course of an atom. For Levi chemistry is “militant”.

The writer Italo Calvino had been Levi’s editor and had helped counter his many doubts that he was relevant primarily as a witness. In his last book, The Drowned and the Saved, written a year before he died, he referred to his death camp number as being a part of his body and saw its importance as evidence of what had happened.

Before his death, he was known to be depressed and stressed by having to deal with his aged mother and mother-in-law. But would a man such as Levi risk throwing himself down a stairwell which could have left him paralysed but still alive? No one knows for sure. Yet his fellow Holocaust survivor, Elie Wiesel, maintained that Primo Levi had already died in Auschwitz, “forty years earlier.”

Bookshops and Covid-19: ‘We can’t say to people you can’t look at the books’
3