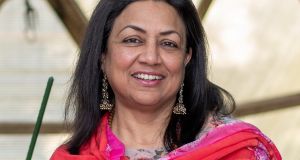 India is not exactly the ideal country to be a collector of books. All of nature conspires against the bibliophile. Silver fish slither from sleeves into jackets, mildew lingers, moths multiply and fine dust settles thick, layer upon layer. Yet, it’s the best country in the world to fall in love with books – after all, the Hindu goddess of knowledge, Saraswati herself, lovingly cradles a book in one of her many hands. Worship me she commands, read with devotion and you will be rewarded with infinite refuges to lose and find yourself in.

My father must have known that when he went on a hunger strike at the age of 11, when his hard-won scholarship to high school was dismissed as a waste of time. His parents were subsistence farmers with aspirations extending just as far as the next harvest and education must have seemed so unnecessary. But he stubbornly refused food and five days later my grandfather relented and my father left his village in south India for King George Military School at Ajmer in the far north. It was 1946, he spoke no English and he travelled 2,200 kilometres by train, five days across the subcontinent to get to school. He was 19 and a half when he was commissioned as an officer in the Indian Army in 1954.

I regret never asking my father how he managed to master the incredible complexities of the English language, its exception to every rule, its paradoxical pronunciation, its contradictory grammar and unfathomable phrases. All I knew was my father read his way up in life, and passed on his love of books to us – my brother and I.

Looking back, I know that had my parents been wealthy I would never have been a big reader. But like army families the world over, we teetered on the fringes of comfortable living. Books, second-hand in the main, were inexpensive magic carpets – taking us to places well beyond my parents’ means, away from utilitarian garrison towns, strict convent schools, and away from the seasonal privations of north India’s burning summers, bitter winters and thunderous monsoons.

It was an idyllic childhood – if we were good we got books, if we were bad we still got books. My parents just couldn’t help themselves – denying us books was a punishment too far. Their liberal outlook defined my childhood, the hundreds of books they indulged me with made me the woman I am today.

I was nine when India and Pakistan went to war in 1971. We lived in an Army cantonment in Kanpur, in a decrepit bungalow on two acres – a relic of the Raj, re-commissioned as married officers’ quarters.The nearby armaments factory was a prime target for an airborne attack so every family had to dig a bomb shelter in their garden. It was a short and bloody conflict, but as children we experienced none of it beyond the terror of air raid sirens during the nightly blackouts.

However, the war gave me a life-long interest in landscape and geography. To explain the dispute with Pakistan, my father pulled out atlases and unfolded maps and we traced with our fingers the borders, east and west, drawn so wantonly in 1947, with no forethought for the people that would be torn apart. Beyond the warring subcontinent however I could see the rest of the world laid out before me and it was so enticing.

When the war ended, the trenches remained and my brother and I put ours to good use. Inspired by Indian ornithologist Salim Ali’s book on birds, we converted the bomb shelter into a hide. My seven year-old brother trowelled out shelves in the walls of red earth to stock everything aspiring bird watchers would need. This consisted mainly of sweets to suck on while we sat silent and a notebook to write in the names of the birds we spotted. My grandmother cut up an old green curtain and sewed us strange camouflage jumpsuits complete with balaclavas. We must have fooled the birds because we became quite proficient in identifying the multitudes that came to our garden.

Soon after, having been allowed to keep a stray pup that I brought home from school, we scoured bookshops for every kind of tome on keeping dogs and our collection grew exponentially, revolving heavily around animals of every kind. White Fang was the one that has stayed with me – the call of the wild is irresistible, even to this day.

Regiments moved frequently and at short notice so most of my childhood friendships were short-lived unlike books that proved to be far more reliable companions. Luckily, every wrenching move brought the promise of an exciting train journey across a country where railway stations and Wheelers bookshops have remained wedded to this day, a marriage made in heaven. The legendary, 143-year-old railway bookshop chain is part of the history of travel in the subcontinent since 1877. Not only had they brought Kipling to the world by publishing him, Wheelers offered the chance of a Kiplingesque experience too.

Long after the train chugged out of the station, you only had to look up from your book to find yourself in another story featuring complete strangers sharing the intimate confines of the carriage with you or, the ones through the windows, the panoramic rural scenes that provided the backdrop for imagined lives. All that reading and watching must have laid down the tracks of my own eventual writing journey.

I was 12 when we moved to Mumbai and found ourselves in a reader’s paradise, the sort where streets were paved with books, though they may as well have been gold. In the 1970s, the sidewalks at the five-way junction at Kala Ghoda were lined with second-hand book shops selling all kinds of comics, magazines and books. The trade still flourishes all over India, helped no doubt by the Indian psyche that will countenance the defacing of everything but books. Saraswati, in her godly wisdom, demands reverence for anything that enlightens the mind but, divine preferences aside, nobody would throw a book out when it could be sold on by the kilo.

On Sundays, we were let loose amongst the stalls, my parents browsing within earshot. We devoured our eclectic selections – the shenanigans of riverine creatures who spent a lot of time rowing or adventures of cowpokes and their steeds that were always mighty and called Thunder. We soaked up Indian myths and jungle tales, lost ourselves in dreamy boarding schools and pondered endlessly on the subject of ginger hair.

I pick up a dusty paperback, opening it at An Irish Airman foresees his Death

My father invariably bought a few old Popular Mechanics with their illustrated plans for tree houses, stables or even hovercrafts made from leaf blowers – all utterly unattainable in our apartment devoid of trees, horses or leaves but it was such fun to plot wild dreams with my father. My mother loved her Reader’s Digests with harrowing accounts of narrow escapes from erupting volcanoes and other disasters which we desperately longed to be in the middle of. They set us up nicely for life, my parents. As did a band of women in stiff white wimples, so stern but occasionally human, who came from some place apparently very misty and green, called Ireland.

I was crooning about the old country long before setting foot ashore, because their ache for home made the nuns want to sing and we had no choice but to join in. Sometimes, on Feast Days, they went completely mad altogether as they made us stumble our way through the Siege of Ennis. But mainly they made us read, read a lot. We learnt of apple-ripe September mornings and wee folk in rushy glens, of Raglan Road and, that bane of my elocution lessons – The Lake Isle of Innisfree. I’m sure Mother Superior up above, having just about squeezed in through the pearly gates, broke into a wry smile to see me, when I came from India to Sligo a decade and a half later, thrilled to be reciting the poem by the shores of Lough Gill.

It was Yeats, in a second-hand anthology, who pushed me over the edge, to start writing my new novel The Tainted. I was toying with developing the events of the mutiny of the Connaught Rangers into a novel when in 2001, mooching around one summer’s day at the weekly market in Bantry, I pick up a dusty paperback, opening it at An Irish Airman foresees his Death. My hair stood on end as I repeated the lines: “Those that I fight I do not hate, / Those that I guard I do not love”. This was my novel in two lines and I knew I just had to write it.

The Tainted by Cauvery Madhavan is published by HopeRoad Publishing