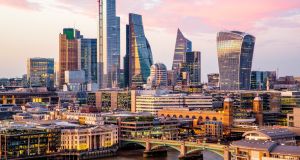 Alpha City, by University of Sheffield academic Rowland Atkinson, takes us through the ugly world of a mega city captured by wealth. Photograph: Alexander Spatari/Getty Images

Cities are the future. Since 2007 more people have been living in urban areas than rural ones globally. With urbanisation now accelerating in the developing world it is expected that by 2050 almost 70 per cent of the world’s population will be living in cities and towns.

But cities are not just the future for most people. How we run our cities will determine the fate of our entire planet. If we are to reach our climate change obligations of net-zero carbon emissions by 2050 (at the very latest) than the way we think about and plan our cities will have to change, and change radically.

Unfortunately, discussions on “the city” in Ireland are too often fragmented and confined to small groups of academics and activists. Wider public and political opinion has yet to fully understand the need for a broad and deep discussion about the present and future of our urban centres.

Covid-19 has forced us to change they way we live, albeit temporarily. Less cars, less commerce, more nature and more time to think. This brief reprieve from “business as usual” offers us a valuable opportunity to start the conversation on what we want or cities to look like post-Covid and beyond. Thankfully, Verso Books have just published two timely and relevant short books on the bad and the good of our urban environment.

Alpha City, by University of Sheffield academic Rowland Atkinson, takes us through the ugly world of a mega city captured by wealth. Cities and towns have always struggled with inequality and the social and spatial realities of unequal access to power and resources. In the great global cities, such as London and New York, these inequalities have often been more stark. Rowland, however, walks us though London since the 1980s.

Under Margaret Thatcher, Tony Blair and Boris Johnson the English capital has been increasingly shaped by a destructive mix of global equity investment, ultra high net-worth individuals and a political class that puts the interests of finance over those of the real economy.

Welcome to the real estate state, in which decisions on planning, residential development, public realm and leisure are increasingly made by and for a tiny minority of the population. Indeed, one of the features of this Alpha City is that many of these “residents” are in fact absentee landlords, buying trophy homes as investments and leaving them vacant all year round.

The consequences of this shift is that working people, who once were the lifeblood of any major industrial city, are displaced. Their homes are demolished to make way for luxury apartments and hotels. The public services, schools, parks and libraries are closed. Their streets are literally closed off with gates and barriers. In turn they are displaced to the suburbs, adding physical marginalisation to the ever growing social and economic gap between the majority and the elite.

Atkinson discusses the impact of the transformation of London in the era of financial capital on neighbours, property prices, provision of public services including social housing, and growing levels of crime and public surveillance.

In contrast to the depressing dystopia of Alpha City, architect Pablo Sendra and sociologist and planner Richard Sennett ask what can people do to resist the distorting impact of financial capital. Their Designing Disorder takes the form of a dialogue exploring what the subtitle usefully describes as “experiments and disruptions in the city”.

The starting point is a summary from Sennett’s seminal 1970 book The Uses of Disorder, in which he challenged the urban planning orthodoxies of the time. Influenced by the civic urbanism of Jane Jacobs but wise to its naive romanticism, Sennett seeks to apply the egalitarian spirit of 1968 to the planning of cities.

He asks, how do we make cities less closed, rigid, predetermined? His answer is “the open city” in which people and planners worker together to democratically create places that encourage a creative disorder.

In response, Sendra imagines what planning for disorder would actually look like in a real live city. He talks of “co-design processes” in which people are not just consulted but become active participants in the design and decision making of their urban environments. This means incorporating uncertainty and incompleteness in our streets and public spaces, allowing the uses to evolve.

For both Sennett and Sendra, cities are at their best when they resist homogeneity and promote difference, and when they empower people to actively shape and reshape their built environment and its public uses. Their city is the very antithesis of the bland, corporate, glitz and greed of the Alpha City.

Closer to home, the future of our cities, and in particular Dublin, is being fought all around us. Increasingly the battle lines are being drawn. On the one hand is former minister for housing Eoghan Murphy’s gentrified tenement co-living, Johnny Ronan’s luxury vanity towers, and John Moran’s vulture fund model of commercial and residential development. It is a city by the few and for the few, concealed behind promises of carbon offsets and smart city technologies.

In opposition are a small but growing band of planners, architects, transport academics, environmental commentators and housing activists who are demanding better. They want a city designed by and for the people. A city of mid-rise, mixed-use development in which families can live and breathe in the city centre. A city with less cars and more buses and bicycles, with less data rendition by big tech and more democratically-controlled cultural and social spaces.

Atkinson, Sendra and Sennett, in their thought-provoking books, make this choice crystal clear. Do we want Dublin orand Cork, Limerick and Belfast to be second-rate Alpha cities for the few, or first-rate democratic cities for the many, with affordable housing, a vibrant cultural life and a sustainable public realm?

Eoin Ó Broin is a Sinn Féin TD and author of Home: Why Public Housing Is the Answer (Merrion Press, 2019).