How England sought to turn colonising Ireland into a crusade

Claims that the medieval Irish had lost their faith or turned to heresy were propaganda to cover a land grab and involved popes, kings, and burning witches and heretics at the stake 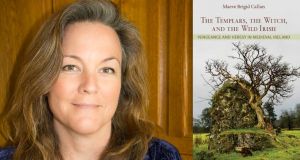 Maeve Callan: “Following Ireland’s first heresy trials in the 14th century, this alleged apostasy was transformed into heresy and used to call for a crusade to annihilate the Irish”

Amid celebrations of Ireland’s marriage equality referendum, a decisive victory for diversity and inclusion which was in no small part a credit to him, Independent Senator David Norris derided the Irish as “a genuinely filthy nation . . . a filthy race of people”. His words echo 12th-century popes’ defamation of the Irish as they blessed the English invasion of Ireland. Fourteenth-century Anglo-Irish colonists repeated similar slurs when they begged Pope John XXII to call a crusade against “the Irish, a sacrilegious and ungovernable race, hostile to God and humanity.”

This portrait was a ploy to further their conquest of Ireland, a battle the colonists were then sorely losing. To strengthen the force of their claims, they burned an Irishman at the stake on trumped-up charges of heresy, proclaiming him the representative of all his people and exploiting allegations of Irish renunciation of faith, or apostasy, which were used to justify Ireland’s invasion and subsequent colonization.

The colonists’ plea to the pope begins by paraphrasing the papal grant of Ireland to Henry II, the king of England, in a text known as Laudabiliter. Written by Adrian IV (the only English pope), Laudabiliter castigated the Irish as “an ignorant and barbarian people” who had renounced Christianity and needed to be restored to the faith by Henry. Adrian’s successor Alexander III reiterated such sentiments after Henry acted on Adrian’s encouragement 15 years later, describing the Irish as “that most undisciplined and untamed nation” and “an uncivilized race”, while praising Henry’s greatness and devotion to the church.

The pope’s praise came amid his recognition of Henry’s responsibility for the recent murder of St Thomas Becket, the archbishop of Canterbury, in his very cathedral. This guilt did not diminish Alexander’s enthusiasm for Henry’s actions in Ireland; instead the pope presented the conquest as part of Henry’s penance for Becket’s murder, evidence of his profound Christian devotion, and the product of divine inspiration. Influenced by these papal endorsements, all of Ireland’s ecclesiastical leaders and all but two of its secular rulers swore fealty to Henry as their overlord.

About 175 years after Adrian issued Laudabiliter, Anglo-Irish colonists entreated Pope John XXII to continue the mission his predecessors had blessed and which was then at risk of permanent failure. They added a single specific example to their repetition of previous general slanders of the Irish, proclaiming “Adduk Duff Octohyl” a heretic who infected Irish and Anglo-Irish alike with his perverse teachings.

A leading Leinster Irish family, the O’Tooles posed an ongoing threat to the colony and had reclaimed a significant swath of land in the Wicklow mountains just south of Dublin. Within weeks of a major O’Toole military defeat by colonists, Adducc Dubh O’Toole was convicted of rejecting the basics of Catholicism: the Trinity, the Incarnation, the Resurrection, Mary’s virginity, the truth of the Bible, and the primacy of the pope. He was burned at the stake on April 11th, 1328 at Hoggen Green, near where Trinity College now stands. His judge was William de Rodyerd, dean of St Patrick’s Cathedral and vicar of the archbishop of Dublin during his recurring absences.

A few years earlier, Rodyerd had received critical assistance from Richard de Ledrede, the Franciscan bishop of Ossory, in his efforts to resolve tensions between Irish and Anglo-Irish Franciscans in Ireland. Rodyerd promptly returned the favour and facilitated Ledrede’s heresy proceedings against Alice Kyteler and her alleged accomplices. This resulted in the first death at the stake in Ireland or Britain – that of Petronilla de Midia in Kilkenny on November 3rd, 1324. Ledrede’s efforts against alleged heresy inspired Rodyerd to try similar tactics against an Irishman whose family had terrified Dublin colonists for decades. Rodyerd then collaborated with Ledrede’s only known other supporters in the Kyteler case – William de Nottingham, the precentor of St Patrick’s, and John Darcy, the justiciar under whom Petronilla was burned alive – to plead with Pope John XXII for a crusade against the Irish and those Anglo-Irish who had adoped their cultural customs, which Rodyerd and his allies presented as heresy.

Although the English gained nominal control over much of Ireland in the late 12th century, the Irish recovered increasing amounts of their land in the 13th century. In the 14th century the colony shrank to about one-third of the island, and by the 15th it was reduced essentially to the area known as the Pale, stretching from Dalkey to Dundalk. This Gaelic Resurgence was accompanied by escalating assimilation by colonists, who became regarded as “more Irish than the Irish themselves”. Desperate to reverse colonial losses, Rodyerd and his allies sacrificed Adducc Dubh O’Toole at the stake, casting him as the incarnation of claims of Irish apostasy that had been made at least since Laudabiliter. Following Ireland’s first heresy trials in the 14th century, this alleged apostasy was transformed into heresy and used to call for a crusade to annihilate the Irish. Otherwise, Rodyerd, Nottingham, and Darcy contended in their plea to the pope, the Irish would not only persist in their perversions, but also continue to contaminate colonists with their heretical culture and customs. The island would be forever lost to Christendom.

Fortunately for the Irish, the papacy was not persuaded and no crusade was called – at least not while England remained a Catholic country. John XXII’s response perhaps may be inferred from his instructions to King Edward III in 1331 that Ireland’s reformation should be left to impartial parties with balanced participation by Ireland’s inhabitants, “pure Irish, and those of a mixed race,” meaning the Anglo-Irish. This appeal for Ireland’s reformation also remained largely unheeded, however, and intense ethnic tensions persisted throughout the island. Claims that the medieval Irish had lost their faith or turned to heresy were propaganda to cover a land grab that continued for centuries.

Senator Norris was speaking specifically about litter on Dublin streets, but the English, the Anglo-Irish, and even some popes were talking serious trash themselves.

Maeve Callan, associate professor of religion at Simpson College in Iowa, is the author of The Templars, the Witch, and the Wild Irish: Vengeance and Heresy in Medieval Ireland, published by Four Courts Press and Cornell University Press. Her book explores Ireland’s medieval heresy trials, which all occurred within a 50-year period in the 14th century. She considers these trials in the context of broader trends in medieval European heresy and witch trials and in relation to the ways in which religion was used to justify the invasion and subsequent colonisation of Ireland by the English.