High achievers: following in the footsteps of the heroes of Ireland’s hills

John G O’Dwyer on what inspired his new book, Wild Stories from the Irish Uplands 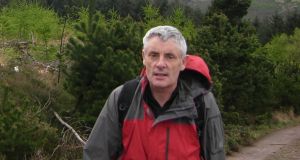 John G O’Dwyer: the USP for the book would, I decided, involve lacing up the boots and following in the footsteps of the succession of rebels, rapparees, saints and sometimes scoundrels who would be central to the storylines.

There I was minding my own business in a secluded corner of a mellow little coffee shop when a phone call shattered the tranquillity. It was environmental centre, Cabragh Wetlands, inquiring had I anything in mind for a talk celebrating National Heritage Week.

This request took me somewhat aback, for the honest answer was I had nothing at all in mind. I had given a presentation in Cabragh for the celebration of Heritage Week the previous year, but that was easy; I had been speaking on the subject of my recently published guidebook, Pilgrim Paths in Ireland. Now, I was being asked to return for a new subject to a wellspring of imagination that, at the moment, appeared dry as a dyke in a desert.

The word “no” never features in our Gaelic language; from distant times we have clearly been a nation of satifisers. So, in the best Irish tradition, I obfuscated. “Give me a couple of days to think about this,” I replied without committing. Heading for the counter, it was then, “Large Americano – three shots, please,” before settling down to think through my unexpected dilemma.

Immediately, a disconcerting thought assailed me. Could I be just a literary one-trick pony, condemned forever to recount tales of individuals putting one foot in front of the other? But then people, and particularly upland folk with their rugged individualism and many incomprehensible ways, had always fascinated me.

Encountering an abundance of upland inhabitants, I had heard many captivating stories throughout my 30 years of rambling the benign Irish uplands. Unassuming in stature but rich in heritage, our low-slung mountains and hills have, throughout the ages, been interwoven with the ebb and flow of Irish history. Our high country has been, through the generations, an accessible part of the landscape in the way the world’s greatest mountain ranges have not.

Could my many upland encounters form the basis of a Heritage Week chat? Gradually, I began to tease out the idea. There was the colourful Tipperary based outlaw of the Slievefelim Hills, Eamon an Chnoic; Republican leader Liam Lynch, gunned down in the Knockmealdown Mountains during the Civil War; and the discovery, as late as the 1980s, of a new geographic feature on Carrauntoohil, dubbed Howling Ridge.

St Brendan came to mind for his ascents of Mount Brandon and a momentous ocean voyage that began beneath the mountain’s western shadow. There was unswerving Fenian and renowned Tipperary wordsmith Charles Kickham, who is forever associated with mythical Slievemanon along with the great War of Independence escape by IRA leader Tom Barry across the Shehy Mountains. Ringing back to Cabragh I said “you can put me down to speak about the stories handed down to us from the Irish Uplands.”

About 60 people turned up on the night with the talk appearing to go well as it drew plenty of questions. That was the end of it, though, for I was immediately back to working on a book titled, A Walking Guide to the Comeragh, Galtee, Knockmealdown and Slieve Bloom Mountains. All the while, however, stories of upland exploits and mountain people kept popping into my consciousness like an annoying jingle from some ubiquitous TV ad. The good news from all this was that when Currach Books came calling, I was ready with an idea. Wild Stories from the Irish Uplands would be my next book.

Ideas are, of course, two a penny in publishing so there still remained the hard slog of transforming a concept into a printed work. I decided to search for stories with strong central characters who had been associated with the Irish uplands. I was most pleased when they gradually began to emerge from the hill country. First added to my preexisting list was Hugh O’Donnell. Thorn in the side of English rule in Ireland, he escaped dramatically from Dublin Castle through the Wicklow mountains during a blizzard and went on to create an immense headache for Queen Elizabeth 1.

Next to visit my consciousness was larger than life Irish-American, Michael Reardon, who came to our shores in order to ascend great cliffs without the encumbrance of safety ropes. There was rebel and namesake Michael Dwyer, whose extraordinary life seemed too fantastic for fiction, while the re-awakening of Ireland’s oldest pilgrim path and the coming of the Kerry Mountain Rescue Team also made for compelling stories.

The USP for the book would, I decided, involve lacing up the boots and following in the footsteps of the succession of rebels, rapparees, saints and sometimes scoundrels who would be central to the storylines. This I hoped would allow me provide readers with a real sense of place and purpose. Many of the areas I had, of course, visited previously but still I was amazed by the amount of new detail that became apparent when I viewed the landscape with the freshness of an author’s eye.

Most interesting were the places I hadn’t been too before. I panted my way up to a remote part of the Wicklow Mountains to visit Art’s Cross where Ulster chieftain, Art O’Neill, reputedly died of exposure, having escaped from Dublin Castle. The most enjoyable day was, however, spent following minutely in the footsteps of IRA chief of staff, Liam Lynch, on the day he was gunned down in the Knockmealdown Mountains while fleeing from Free State soldiers. It put me in mind of walking through a great outdoor museum, and I was genuinely taken aback by how accurately those present had described details of the local landscape.

Finally, the book is out of my hands. All 14 stories will now, like a political party on election day, be judged by others. What strikes me about the whole experience of writing is, however, the importance of happenchance in all our lives. Were it not for a single, brief phone call received in July 2016, Wild Stories from the Irish Uplands would never have made it to the bookshelves.