Hesse – The Wanderer and his Shadow: Self indulgent and banal 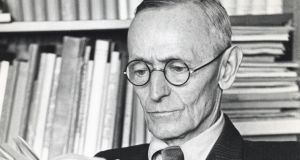 Hermann Hesse: the implacable opponent of German nationalism was the recipient of the Nobel Prize for Literature in 1946 and, by the late 1970s, the most widely translated European author of the 20th century. Photograph: Dutch National Archives

Book Title:
Hesse: The Wanderer and his Shadow

It is the fate of certain writers to be associated with an age, more biological than historical. Childhood has its pantheon of Enid Blyton, Nancy Drew, Richmal Crompton, JRR Tolkien and more recently JK Rowling but adolescence too has its own circle of intimates. Harper Lee, JD Salinger, DH Lawrence, Fyodor Dostoevsky and Hermann Hesse are writers whose novels are often wolfed down in the feeding frenzy of teenhood and remembered later as part of the aesthetic and emotional passage to the more muted offerings of adult life.

Siddhartha (1922), Steppenwolf (1927) and Journey to the East (1932) were books that from the 1960s onwards furnished a thousand bedsits with the alibi of spiritual yearning. It is often forgotten that Hesse was the recipient of the Nobel Prize for Literature in 1946 and, by the late 1970s, the most widely translated European author of the 20th century.

Thomas Mann, writing in 1937 in reaction to Nazi bombast about the Greater Germany, hailed Hesse as the great poet of the Little Germany: “There is nothing more German than this writer and his life’s work – nothing that could be conceivably more German in the old, joyous, free and spiritual sense of the word, the one that has given the German name its best reputation and earned it the gratitude of mankind.”

Mann’s hero was born in 1877 in the Black Forest town of Calw in Baden-Württemberg, Germany. His family on both sides was deeply immersed in Pietism, a movement originating in 17th-century Germany with a strong emphasis on the study of biblical doctrine and the strict observance of Christian piety in daily life.

His maternal grandparents had been missionaries in India where they also studied local languages. His mother was the author of four works including a well-received biography of the Scottish explorer and missionary David Livingstone.

If Hesse renounced the religion of his early years, the yearning for spiritual otherness and transformation would never leave him

Hesse entered the evangelical theological seminary of Maulbronn Abbey in 1891 but it soon became evident that he was not destined to champion the faith of his forbears. He ran away, bought a revolver, attempted suicide and was eventually committed to the mental asylum in Stetten im Remstal. In his letters to his parents from the period (Hesse was a prolific correspondent and wrote over 44,000 letters over the course of his lifetime) his rejection of the punitive God of his childhood Pietism became increasingly explicit.

Eventually, however, Hesse returned to formal schooling and, on completing his final examinations, took up a succession of positions as an apprentice in a clockmaker’s workshop in Calw and as a bookseller’s assistant in Tübingen and Basel. By 1904, Hesse was making a living as a writer from his different publications and was beginning to be promoted by one of the leading publishers of the period, Samuel Fischer.

If Hesse renounced the religion of his early years, the yearning for spiritual otherness and transformation would never leave him. This longing took two forms, firstly in his deep engagement with German romanticism and secondly in his passionate interest in Asian mystical traditions. Johann Wolfgang Goethe’s novel of personal growth and self-discovery, Wilhelm Meister’s Apprenticeship, became one of Hesse’s sacred texts, and in the writings of German poet and mystic Novalis in particular, Hesse saw how art could substitute for religion as a way of looking beyond the purely material to experience other dimensions of being.

Already sensitised by the experiences of his grandparents in India, Hesse prolonged his exploration of Asian cultures in 1911 with a trip that took in Sri Lanka, Indonesia, Sumatra, Borneo and Burma. Never a happy camper – physical travel exhausted him – Hesse nonetheless found his journeying to be an important opportunity to deepen his pre-existing interest in Buddhist philosophy.

The text is stuffed with exclamation marks which, as the poet WH Auden once remarked, is like laughing at your own jokes

It was precisely this mixture of western romanticism and eastern mysticism that made Hesse’s writings so deeply attractive to apostles of 1960s counter-cultural movement, such as Timothy Leary and Colin Wilson, and to a new generation of readers in the anglophone world.

Hesse was an implacable opponent of German nationalism in both the first and second World Wars though he was frequently criticised by German émigré writers (not by Mann) for not being more explicit in his denunciation of the Nazi regime. Nazi artistic fellow travellers, on the other hand, deplored Hesse’s lack of enthusiasm for the New Order, and the publication of his last novel, The Glass Bead Game (1943), was banned in Germany. This last work, set in the future in the fictional province of Castalia in eastern Europe, is his most complex and ambitious piece of writing, a mapping of the life of the mind and the pratfalls of emotional blindness.

Hesse’s reputation has fluctuated greatly since his death in 1962 and the translation of this new biography of Hesse by Gunnar Decker is unlikely to win the writer any new admirers. Decker insists on being the life and soul of the biographical party and the narrative is dogged by portentous, self-regarding comments that try the patience of even the most accommodating reader.

Describing an early text of Hesse’s on having his horoscope read, Decker observes, “His commentaries became a truly obscure horoscope of their own, an overconfident hermeneutics at the seat of a profound life crisis.” Indeed.

The text is stuffed with exclamation marks which, as the poet WH Auden once remarked, is like laughing at your own jokes and the metaphors on occasion are hobbled by their own unrepentant banality as in these lines describing Hesse starting to write in Tübingen, “And so the bird began to break its way out of the eggshell. To put it another way: Hesse started to swim.”

Hesse will always find his readers, biographers notwithstanding, and in his rejection of the boundary walls of his suspicion, his attentiveness to the environment and his scepticism around the cult of the author may be due something of a revival. And not just in the bedsit.