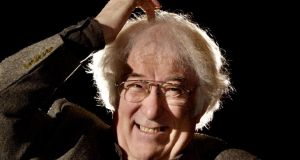 Poetry collections by the late Seamus Heaney have been selling out in Dublin bookshops since the poet’s death last Friday.

Eason’s bookshop on Dublin’s O’Connell Street had sold out of all stock by Tuesday morning.

“Because he was so beloved, people are looking to rediscover his work,” said Stephen Boylan of Eason’s.

The scene was the same in Dubray bookshops in Dublin and Wicklow, with people looking to purchase a memento of Ireland’s most beloved poet.

“Two women phoned separately this week because their sons were graduating and they wanted to give his collection as gifts, but we didn’t have anything left,” said Sally Kingston of Dubray in Wicklow. More stock has been ordered.

At Hodges Figgis on Dawson Street in Dublin, store manager Gina O’Donnell said: “While we don’t give out exact figures, sales have increased a hundred-fold.”

The Books Quiz: Who wrote The Naked Lunch?
3