As Donald Trump attacks the free press, a new study of Shaw’s journalism shows he risked all by questioning government during WWI, a role he saw as democracy’s bedrock 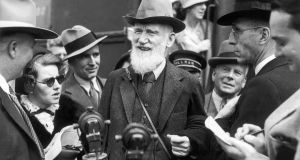 George Bernard Shaw on a visit in Los Angeles answering questions from the American journalists around him. Photograph: Keystone-France/Gamma-Keystone via Getty Images

As we contend with the seeming war against the free press that certain American politicians have embarked on, it might be prudent to revisit George Bernard Shaw’s courageous efforts on behalf of the free press in the early months of the Great War.

The war erupted as Shaw was at the peak of his theatrical career with the spring triumph of Pygmalion, yet he risked everything by holding true to the ideals of the free press. While the London press adhered to the Defence of the Realm Act and propagated the government’s war, Shaw quickly began questioning Herbert Asquith’s government. By September, Shaw’s press contributions were no longer welcomed. CP Scott of the Manchester Guardian informed Shaw that it was not the time for criticism. But on November 14th, 1914, Shaw published his master essay, Common Sense about the War, as a supplement to the New Statesman: “The time has come to pluck up courage and begin to talk and write soberly about the war.”

After alluding to the suspension of the implementation of Home Rule and his “Irish capacity”, Shaw, in his own words, wrote: “I see the people of England united in a fierce detestation and defiance of the views and acts of Prussian Junkerism. And I see the German people stirred to the depth by a similar antipathy to English Junkerism, and angered by the apparent treachery and duplicity of the attack made on them by us in their extremist peril from France and Russia. I see both nations duped, but alas! Not quite unwillingly duped, by their Junkers and Militarists of England and Germany jumping at the chance they have longed for in vain for many years of smashing one another and establishing their own oligarchy as the dominant military power in the world”.

Shaw was pursuing what no other wartime journalist dared in late 1914. He questioned the Government, including its demonising of Germany.

Shaw was pursuing what no other wartime journalist dared in late 1914. He questioned the Government, including its demonising of Germany through its claim that war was declared because Germany invaded Belgium. To Shaw, such a claim was absurd given Britain’s colonies held by coercion.

To those who believed that the Government must only be supported and not criticised, Shaw wrote: “I must reply that history consists of recrimination, and that I am writing history because an accurate knowledge of what has occurred is not only indispensible to any sort of reasonable behaviour on our part in the face of Europe when the inevitable day of settlement comes, but because it has a practical bearing on the most perilously urgent and immediate business before us; the business of the appeal to the nation for recruits and for enormous sums of money.”

Shaw challenged the Government by insisting that the war had to be about more than patriotism given the unprecedented casualties: “We are passing the first phase of the war fever, in which men flock to the colours by instinct, by romantic desire for adventure. . . . The difficulty begins when . . . we have to draw on the solid, skeptical, sensible residuum who know the value of their lives . . . , and will not give them except on substantial and honourable conditions. These Ironsides know that it is one thing to fight for your country, and quite another to let your wife and children starve to save our rich idlers from a rise in the supertax”.

Far from being against the war, Shaw advocated for a British and French victory, provided the war was not fought for military dominance, but for the betterment of world society. To Shaw, a worthy cause was democratic socialism – which to Shaw meant equality and suffrage for all, regardless of gender, race, religion, wealth or any other fabricated perception used to divide.

Shaw anticipated the mindset for negotiating the war’s end: 'Militarism must not be treated as a disease peculiar to Prussia. It is rampant in England; and in France'

As Shaw concluded, he anticipated the mindset for negotiating the war’s end: “Militarism must not be treated as a disease peculiar to Prussia. It is rampant in England; and in France . . . . If the upshot of the war is to be regarded and acted upon simply as a defeat of German Militarism by Anglo-French Militarism, then the war will not only have wrought its own immediate evils of destruction and demoralization, but will extinguish the last hope we have risen above the ‘dragons of the prime, that tare each other in their slime’.”

The London press condemned Common Sense about the War, and its author. The Daily Mirror, owned by Dublin-born Alfred Harmsworth, Lord Northcliffe, focused on Shaw’s claim that England was as much to blame for the war as Germany. Yet by the late 1915 winter, Northcliffe’s London Times was following Shaw in criticising the government. At issue was the lack of shells at the British front, which resulted in the curtailing of Lord Kitchener’s military leadership. Shaw noted in More Common Sense about the War that this was “a striking example of the power of a democratic press in its legitimate use as the proper antidote to the official secrecy with which Governments hide their misdeeds and shortcomings from the public”. Indeed.

In May 1915 in the wake of the first Gallipoli debacle, the London press again criticised the government, leading to the removal of Winston Churchill from the admiralty and forcing Asquith to form a coalition government. In late 1916, eight months following the Easter Rising and four months after the Somme, the free press again criticised the government, leading to the resignations of Asquith and foreign secretary Sir Edward Grey. When asked by the Star if he had anything he wished to withdraw from his criticising journalism, Shaw replied: “I HAVE NOTHING TO WITHDRAW.”

For Shaw, the role of the free press was democracy’s foundation. In More Common Sense about the War, Shaw wrote that the journalistic goal of the free press must be “criticism, criticism, and still more criticism”. The goal of Shaw’s journalism was to provoke change when change was needed, even if that meant criticising government leaders.
Nelson O’Ceallaigh Ritschel is the author of Bernard Shaw, W. T. Stead, and the New Journalism: Whitechapel, Parnell, Titanic, and the Great War (Palgrave Macmillan, 2017)