Game of Thrones would be nothing without Tolkien

A Song of Ice and Fire is fundamentally un-Tolkienesque – heroes die, villains prosper – but George RR Martin is a self-proclaimed fan of the Lord of the Rings 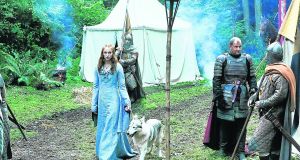 Sophie Turner as Sansa Stark in Game of Thrones. Her recent rescue by knights in shiny armour and straight-from-the-wash banners who looked as if they’d rumbled in from the final half hour of the Return of the King alienated fans who like their endings gory, not cheesy 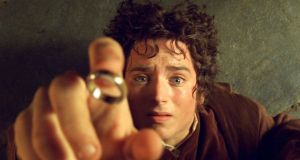 Elijah Wood as Frodo Baggins. George RRMartin is a self-proclaimed fan of the Lord of the Rings’ sweeping story-telling. “His books had enormous influence on me,” Martin said of Tolkien several years go

A great howl of frustration went up when Game of Thrones’ massively hyped “Battle of the Bastards” episode recently concluded with an army of nattily-attired knights thundering to the rescue of Jon Snow and Sansa Stark. While many fans of the swords and sorcery blockbuster, the sixth season of which concludes tonight, cheered this twist, a vocal minority felt the climactic tussle between House Stark (what’s left of it) and House Bolton had wrapped up a little too neatly. Where was the violent betrayal? The hero hoisted on his own naivety? The random beheadings?

On Twitter, one complaint made again and again was that the climax was excessively Tolkien-esque – that Jon and Sansa’s last-minute saviours, with their shiny armour and straight-from-the-wash banners, looked as if they’d rumbled in from the final half hour of the Return of the King. Here was one of those cheesy endings Game of Thrones – and the George RR Martin novels from which the series is adapted – had set itself against.

Well, yes – and no. It is true that Martin’s A Song of Ice and Fire sequence is fundamentally un-Tolkienesque. Heroes die. Villains prosper (though more than a few have lately received karmic comeuppance on the TV show – am I right, Ramsay Bolton?). “Good” and “evil” are whatever the most powerful person in the room says they are (especially if they have dragons).

And yet, without Tolkien, there would be no Game of Thrones. Martin is a self-proclaimed fan of the Lord of the Rings’ sweeping story-telling. There are fantasy writers who have devoted their careers to laying bare what they believe to be Tolkien’s moral hucksterism (most vocally Michael Moorcock, creator of the great anti-hero Eric of Melniboné). Martin is not a member of the club.

“His books had enormous influence on me,” Martin said of Tolkien several years go. “And the trope that he sort of established – the idea of the Dark Lord and his Evil Minions – in the hands of lesser writers over the years and decades has not served the genre well. It has been beaten to death.”

Martin’s esteem for Tolkien isn’t always obvious watching Game of Thrones. It is, however, readily discernible on the page. In the novels, he allows his characters take their sweet time travelling Westeros so that he can immerse the reader in the vast imaginary continent , much as Tolkien did with Lord of the Rings (both a thrilling adventure and beginner’s guide to Middle Earth). His world-building is explicitly Tolkien-esque.

Within literary fantasy, Martin is often heralded as godfather of “Grimdark”, a post-Tolkien milieu that lustily embraces real-world complexities – corrupt rulers, sexual politics etc – towards which Lord of the Rings maintained cheerful and blissful ignorance. In Lord of the Rings, the kisses are chaste, the dialogue often flowery. In Grimdark, everyone is seedy, over-sexed and about to stab someone in the back (figuratively – but often literally too).

Martin was certainly one of the first writers of morally complex fantasy to find a readership beyond hardcore s&s fans. But while arguably introducing “Grimdark” to a wider audience, he certainly didn’t create it. The movement has been with us, in a cohesive form, at least from the mid-1980s, and the arrival of Warhammer board and fantasy role playing game.

Unfolding in a distorted version of the Holy Roman Empire, the original Warhammer Fantasy Battle was grim with a huge, blood-soaked “G”. Rulers were grasping and short-sighted; religious intolerance widespread. Mutant servants of “chaos” lurked in the benighted wastes of the far north, plotting the overthrow of humankind (are bells chiming?).

Soon Grimdark was everywhere. Its influence can today be seen in video games such as Dark Souls and the Witcher franchise. It also is ever-present in the best contemporary fantasy: Joe Abercrombie’s First Law trilogy (Abercrombie actually tweets as LordGrimdark), Richard Morgan’s The Steel Remains and Steven Erikson’s Malazan Book of the Fallen saga.

The tone and outlook of these books will be instantly familiar to fans of Martin. Abercrombie’s characters swear, betray one another and loudly go to the toilet at the side of the road. The Steel Remains, meanwhile, features a cynical hero, sex slaves and protagonists of such grubby morals they make Jaime Lannister look like Sam Gamgee tending daffodils.

Then again, fantasy has always been grim and dark to a degree. A cosmic fatalism hung heavy over Robert E Howard’s Conan the Barbarian stories (no surprise considering he moved in the same circles as the father of existential horror, HP Lovecraft). Stephen Donaldson’s Chronicles of Thomas Covenant, the most important work to come out of the Seventies boom in Lord of the Rings-esque doorstopper trilogies, began with the hero raping a 16-year-old. And what of the scene in Raymond E Feist’s Magician sequence in which zombies rampage through a brothel? Here were two of Game of Thrones’s favourite tropes – undead and sex workers – brought together in one memorably bloody set piece when Westeros was merely a twinkle in George RR Martin’s eye.

The point is that fantasy has never been black and white and the idea that George RR Martin owes it to his readers to be soul-searingly grim all the time is built on a false premise. He loves his derring-do, his shiny knights with banners, as much as the next former Dungeons and Dragons player.

Indeed, it is because he adores the cliches of the milieu that he is so good at deconstructing him. So don’t roll your eyes when Game of Thrones appears to break character by dangling a satisfying resolution or dispensing justice to a villain such as Ramsay Bolton. Martin understands the worth of a happy ending – and when he gives us one, the impact is doubly powerful because it is honestly earned.

All our coverage of the fantasy epic: news, reviews, recaps and interviews