Frontline Ukraine, by Richard Sakwa: Portrait of crisis does not demonise Putin 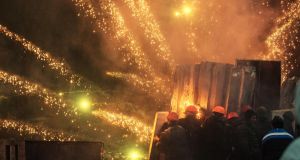 When the first World War broke out Pope Benedict XV declared it the suicide of Europe. But Europe survived and was reborn, albeit after two World Wars and a prolonged cold war that threatened nuclear extinction. At the heart of this rebirth was the European Union and its project both to unify and to pacify Europe.

In this powerful account of the Ukraine crisis Richard Sakwa argues the EU has abandoned that peace project and allowed itself to become an auxiliary of Nato’s expansion into central and eastern Europe. Instead of seeking accommodation, compromise and engagement with Russia in relation to Ukraine, the EU leadership in Brussels has turned the issue of Ukraine’s “European choice” into an instrument to isolate and destabilise Vladimir Putin’s regime. The resultant dangerous confrontation between Russia and the West will divide the continent for at least a generation.

At the forefront of this development have been Russophobes in Poland, the Baltic States and other countries within the “new Europe”, who have imported into the EU their historic antagonisms with neighbouring Russia. Supported by resurgent cold warriors in the United States, the anti-Putin camp in Europe has demonised the Russian president and denied his country’s legitimate security interests and concerns. The contention that Nato and EU enlargement is no threat to Russia is belied by Nato’s military exercises on Russia’s borders and belligerent calls to arm Ukraine and increase western military spending.

Prof Sakwa, a British scholar of Polish heritage who specialises in Russian and European politics, intends his book to counter the predominant western narrative that blames Russia for the civil war and crisis in Ukraine.

Sakwa identifies two distinct crises in relation to Ukraine. The first he calls “the Ukrainian crisis”, this being the internal clash between two versions of Ukrainian identity, nationalism and statehood: the “mono” versus the pluralist, the “orange” versus the “blue”. While the Maidan demonstrations in Kiev began as pluralist and inclusive protests against a corrupt “blue” regime, they turned violent and were captured by ethnic nationalists whose self-definition rests, above all, on their hostility to Russia. Against Maidan mononationalism are those, in the Donbass and elsewhere, who envisage a Ukraine of many diverse identities, a state that is part of Europe but close to Russia, too.

Second, he identifies “the Ukraine crisis” brought about because of a structural imbalance in post-cold-war Europe. This, he says, has led to the internationalisation of the Ukraine civil war as a clash between Russia and the West. The fundamental source of the imbalance has been Russia’s weakness relative to the West, its exclusion from Nato and the EU, and the continent’s overall failure to construct a common security system in Europe.

Sakwa’s statement that Putin is the most pro-European leader that Russia has ever had will surprise some, but when he came to power 15 years ago the Russian president was committed to partnership with the EU and with the US and Nato. Putin is not an ideologue, says Sakwa, but a rational and pragmatic politician. It is western expansion to Russia’s borders that has driven Putin to adopt a “neorevisionist” policy of contesting a western-dominated European and world order, with Ukraine pushed into the frontline of this struggle.

The West has attempted but failed to subdue Putin by sanctions and to isolate Russia internationally. Domestically, the Putin regime is stronger than ever, notwithstanding a growing economic crisis caused by collapsing oil prices. There is very little support for sanctions in countries outside the western orbit, and Putin is busily and successfully constructing new relationships with China, Turkey and other states, including dissident governments within the EU.

Sakwa also draws attention to another dichotomy: between the “Wider Europe” sought by the EU and the “Greater Europe” favoured by Putin. Like ethno-Ukrainian nationalism, Wider Europe is a monopolistic project – the EU writ large and excluding states like Russia that do not conform to the western model. Greater Europe, which would include Russia, is a more multipolar and pluralistic concept. The future of these two projects is at stake in Ukraine. The question is not which will prevail but whether the two can coexist peacefully.

Although much of Sakwa’s book is concerned with the international dimensions of the Ukraine crisis, those chapters are balanced by others devoted to Ukraine’s internal development since it gained independence in 1991, including a detailed narrative of the events of the past two years. Ukraine’s recent history is a fiercely contested story. Sakwa offers a strong interpretation, critical of ethnic nationalism and tending to favour the Russian and “blue” point of view. But he treats differing perspectives fairly and is meticulous in his reconstruction of events, whether it is the violent escalation of the Maidan protests, the secession of Crimea, the revolt in eastern Ukraine or Russia’s role in the crisis.

The ultranationalist tendencies of the Kiev regime sit ill with the liberal democratic values of the EU, and they are likely to become increasingly uncomfortable bedfellows. Kiev may succeed in realigning Ukraine with the West, but, as its defeat on the battlefield shows, it does not have the power to impose its will on the Russian-backed separatists. Within Ukraine are millions of Russian-speaking citizens who share neither Kiev’s mononationalism nor its Russophobia.

Ukraine is one of the most corrupt and inefficient states in the world, much worse than even Russia. During the civil war its oligarchs have gained even more power and riches, protected now by private armed militias. In practice the alternative to the federalised Ukrainian state proposed by Russia is not some idealised western liberal democracy but a feudal Ukraine based on an opportunistic alliance of oligarchs and ultranationalists.

Before the crisis Russia was Ukraine’s biggest and most important trading partner. Ukraine depends on Russian energy supplies. Millions of Ukrainian citizens live and work in Russia and send vital resources back home. Without Russian participation there is no viable solution or alternative to the economic collapse suffered by disintegrating Ukraine.

Sakwa is pessimistic about Ukraine. The nationalist genie is out of the bottle in Russia as well as Ukraine, and the EU has been exposed as incapable of transcending hackneyed cold-war perspectives. Cold warriors on both sides are having a field day while those Ukrainian citizens who see their country as a bridge between Europe and the EU have been marginalised by a civil war in which thousands have died. The disintegration of Ukraine will likely continue and may lead to further violent uprisings.

The one hope is that it is in Russia’s vital interest to stabilise Ukraine. For that to happen, Sakwa writes, “Moscow needs to show the courage of compassion towards Ukraine. It is a country that in many respects is another part of Russia itself, while Russia is inevitably part of Ukrainian identity. The crisis will only be resolved when ‘normal’ relations are established between the two countries.”

Geoffrey Roberts is professor of history at University College Cork

Mild-mannered he may be, but Matt Cooper will go 10 rounds with anyone
4