Ever the absolute beginner: Bowie, by Simon Critchley

Review: David Bowie created the Ziggy zeitgeist more than 40 years ago and has spent every creative moment since experimenting, innovating, recalibrating 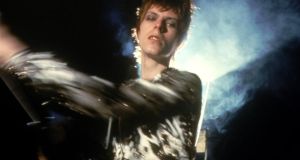 David Bowie, Ziggy Stardust and the Spiders from Mars

For the proto-punks and New Romantics-in-waiting, David Bowie’s 1972 appearance on Top of the Pops, performing Starman in full Ziggy Stardust regalia, is up there with JFK’s assassination and the moon landings as a cultural flashpoint. Bowie, carrot-topped and androgynous, seemed less like a pop star than some cosmic John the Baptist sent to earth with news of the apocalypse, or the Rapture, or both.

Bowie was not the first example of rock star as existential alien (Robert Johnson, Elvis, Jim Morrison and Syd Barrett all preceded him), but he was the first to cast himself as an actual extra-terrestrial. Bowie-as-Ziggy seemed savagely intelligent as well as sexually charismatic, projecting the kind of mystique that now seems exotic in an age of ten-a-penny slebs who devalue their cult-of-personality currency with tweets and selfies, or nice boys next door like Coldplay or Mumford & Sons.

Popular philosopher and New York Times columnist Simon Critchley uses that TOTP appearance, which was viewed by a quarter of the British population, as the point of departure for this short book/extended essay.

“I watched this orange-haired creature in a catsuit limp-wristedly put his arm around Mick Ronson’s shoulder,” he writes. “It wasn’t so much the quality of the song that struck me; it was the shock of Bowie’s look. It was overwhelming. He seemed so sexual, so knowing, so sly and so strange. At once cocky and vulnerable. His face seemed full of sly understanding – a door to a world of unknown pleasures.”

In these few lines Critchley conjures an age when rock musicians – The Velvet Underground, Roxy Music, Iggy Pop – seemed like dangerous, omnivorous beasts. Before rock’n’roll became inbred and self-referential, its most innovative practitioners were art-savvy magpies stealing ideas from sources as outre as William Burroughs, Kabuki theatre and German Expressionism.

A visualist in everything

“Bowie’s truth is inauthentic, completely self-conscious and utterly constructed,” Critchley writes. “But it is still right, es stimmt as one can say in German, or it has the quality of feeling right, of being stimmig.”

Bowie also serves to remind us that while his pre-1975 output was relatively orthodox in musical terms, utilising the primary elements of guitar, piano, bass and drums, his performance concepts and lyrical themes were damn near avant garde.

They drew on everything from Frances Bacon’s paintings to Brion Gysin’s cut-up methodology to pulp sci-fi. A song such as Drive-In Saturday (from Aladdin Sane) sound like unreconstructed high-school doo-wop, but the lyric described a post-apocalyptic colony driven to reimagine their vanished world through the medium of old movies.

And, amid all the canonical fuss about his Berlin masterpieces, I’d plain forgotten the warped majesty of Diamond Dogs, an album indebted to 1984 and A Clockwork Orange.

In fact, the spoken-word track Future Legend, one of the weirdest openings to any rock album, could have been penned by JG Ballard channelling Allen Ginsberg: “Fleas the size of rats sucked on rats the size of cats/And ten thousand peoploids split into small tribes/Coveting the highest of the sterile syscrapers”.

“Here is a picture of urban space prior to gentrification (bliss it was to be alive in that twilight), a space of crime and inverted consumerism. Tramps wear diamonds, silver fox fur becomes legwarmers, heraldic emblems of jewels become rich trash to be draped around freakish peoploids.”

When Bowie later left LA for Europe, swapping coke and the occult for booze, coffee, fags and krautrock, he began to incorporate more spiritual lyrical ideas.

“Station to Station is the railway journey suggested by the opening synthesized locomotive noise,” Critchely observes. “But it is also the stations of the via dolorosa of Jesus in Jerusalem from Gethsemane to Calvary. Bowie’s lyric, steeped in Kabbalistic esotericism, concerns the passage between the divine and the human and the possible divinity of the human, which is Christ’s Passion.”

As you may gather, Bowie is not a bricks-and-mortar biographical study. Rather, it is a philosophical tract, and as such is sure to irritate the librarians and list-makers of music fandom.

If you’re the kind of reader who tears his hair out over the digressions and dissertations of Paul Morley or Simon Reynolds, you should avoid it like the plague. But it is, to these eyes, a valuable little book, sizzling with original perceptions conveyed in clear, accessible language, unencumbered by university jargon.

“Bowie’s music is about yearning,” Critchley concludes. “Ultimately, this is a yearning for love. His yearning touches something in ours, unlocking a bittersweet memory, for example the deliciously painful longing of exile.”

In other words, even aliens get the blues.