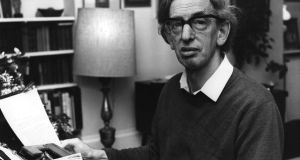 Eric Hobsbawm: brought the product of the “new ways in history” to a wider, non-specialist, reading public. Photograph: Wesley/Keystone/Getty Images

Just across the way from the massive bronze bust of Karl Marx in Highgate cemetery, north London, stands a plain gravestone, inscribed simply “Eric Hobsbawm, Historian, 1917-2012”. It is a marvellously terse description of a man who, at the time of his death, writes his new biographer, Richard Evans, “had for some years been the best-known and widely-read historian in the world”. In his long, no ordinary life, Hobsbawm was elected to the Cambridge apostles – a secretive intellectual society whose alumni include John Maynard Keynes and Ludwig Wittgenstein – and served in the British army, and as the New Statesman’s pseudonymous jazz critic, “Francis Newton”; he was a teacher, a traveller, an occasional broadcaster, an amateur ornithologist, and above all, a communist.

In the course of “the short 20th century” (a term he coined), Hobsbawm shows up, Zelig-like, marching against Hitler in Berlin in 1933, rallying for the Popular Front in Paris in 1936, visiting an anarchist-run village in Catalonia at the start of the Spanish civil war that same year, demonstrating with CND in Trafalgar Square in 1960, and, in 1962, acting as a translator for Che Guevara in Cuba. Conspicuously absent from this list is the second World War. As a known “subversive” under MI5 surveillance, every application by Hobsbawm for a transfer was blocked by his superiors, especially if it was for a posting overseas. He thus spent the war years in the Education Corps, working in a military hospital, and “digging holes”.

An entirely secularised Jew, when as a young teenager in Vienna he sought to tick a “no religion” box, his secularised mother urged him to “never do anything, or seem to do anything, that might suggest you are ashamed of being a Jew”, and in old age he acknowledged that he had always tried to live up to her injunction. Evans shrewdly notes that Hobsbawm wrote an (unpublished) poem in 1941 entitled Kaddish for a Russian Soldier, choosing a Jewish prayer, rather than, say, an “epitaph” or an “elegy”. Similarly, born a British citizen in Alexandria, Egypt – his father was a Londoner – he was also English by conviction, fluent equally in English and German, and known at school in Vienna as “the English boy”. He arrived in England for good in 1933, and yet his early attempts at poetry, and the dairies he kept intermittently in the 1940s and 1950s, were written in German.

The intersections between “warts and all” biography and the great dramas of contemporaneous European history are as fascinating as they are illuminating, and are here expertly stitched together. Ultimately, however, Hobsbawm’s reputation stands on his achievement as an historian and, in the 1950s, his professional career is defined absolutely by the cold war. In that hostile political climate, Marxist academics had to shift for themselves, and so in 1952 members of the Communist Party Historians Group, including Hobsbawm, launched Past & Present. Today it is among the most prestigious historical journals in the world but in its early years the library of London’s Institute of Historical Research refused to take out a subscription. Past & Present stretched the boundaries and enriched the substance of historical inquiry, moving beyond the insular, often narrowly technical, political and diplomatic studies then predominant in the English-speaking world, into the largely uncharted territories of subaltern culture – an essay on the myth of Robin Hood, for example – and faraway places. But for all that, it remained a specialist journal. Along with colleagues such as Christopher Hill and EP Thompson, Hobsbawm now set out to bring the product of the “new ways in history” to a wider, non-specialist, reading public, and in this they succeeded spectacularly.

During the 1960s, as the cold war began to thaw and mainstream British politics tilted left of centre, Hobsbawm’s books, beginning with Age of Revolution (1962) began to command a national, and soon an international, audience. Like all his writing, Age wore its undoctrinaire Marxist theory lightly, combining striking generalisation, penetrating analysis and a staggering range of reference, with a clear, lively, jargon-free, prose. There were other social and cultural forces at work: an unprecedented expansion of the universities (and thus of the readership for history “textbooks”), the emergence, later in the decade, of the “counter culture” and of a generation of students with the iconic poster of Che on every other bedroom wall, and in the market for titles such as Hobsbawm’s Bandits (1969) and Hill’s The World Turned Upside Down (1972). But perhaps the most important development of all was the “Penquinisation” of the book trade. Evans’s chapter on this period is called “Paperback Writer”. Many of Hobsbawm’s books have never been out of print. His Age of Extremes (1994) has been translated into 30 languages. In public life, he is recognised as the intellectual founding father of New Labour – retrospectively a somewhat radioactive accolade. His final paperback volume is How to Change the World (2011).

The final chapter in Richard Evans’s exemplary account of an exemplary life, is entitled “National Treasure”, and in 1997 Hobsbawm duly became a Companion of Honour. Why did this notoriously unrepentant communist, convinced republican (we are told), and historian of Invented Traditions (symbolised on the cover of the Canto Classics edition by a bowler hat) accept an insignia which incorporates the imperial crown? The “my mother would have wanted me to” excuse is suspiciously de rigueur (see Isaiah Berlin, etc.). Perhaps, in some ironic way, the Ruritainian flummery of the decoration appealed to the residual Mitteleuropean in him? More likely it affirmed a profound emotional investment in English identity. And again, how can that nationalist sentiment be reconciled with his view of nationalism as an historically recent, and dangerous, ideological construction? A casual aside in his book Nations and Nationalism offers a clue. “English nationalism”, he asserts, “is a term which itself sounds odd to many ears.” He had, moreover, plenty of company, on the left as well as the right, who shared in the pleasing pre-Brexitland delusion that English nationalism didn’t really exist. How very strange.

Brushing up on your high culture? Forgive my scepticism
5