A decade after writing The Blue Tango about a real-life murder, the author revisited another crime scene in Orchid Blue. Martin Doyle interviews a true great of true crime 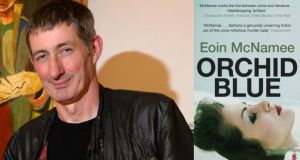 Eoin McNamee: “There’s always a moment when something clicks and you find your way into a subject”

Eoin McNamee might have been predestined to write a novel about the murder of 19-year-old Pearl Gamble after a dance at an Orange hall in Newry, Co Down in 1961, for which Robert McGladdery became the last man to be hanged in the North after a trial controversially presided over by Judge Lance Curran, whose own 19-year-old daughter Patricia had been murdered only nine years previously.

Patricia Curran’s murder, and the wrongful conviction of Iain Hay Gordon for the crime, was the subject of McNamee’s brilliant and darkly compelling 2001 novel, the Booker-longlisted Blue Tango, which dwelt at length on the suspicious behaviour of Lance Curran on the night of the murder, so when he discovered that Curran was the hanging judge in a similar case, the idea for another novel slowly began to germinate.

There was another, personal connection. “I was born about 100 yards from the Orange hall about three weeks before McGladdery was hanged,” the author reveals. “There was a psychic connection there which I never realised I had.”

McNamee has made his name as an author of psychologically penetrating and stylised literary reimaginings of real-life crimes and suspected conspiracies, from the Shankill Butchers (Resurrection Man) to the murderous activities and murder of undercover British intelligence officer Robert Nairac (The Ultras) to the death of Princess Diana (12.23).

Fellow author Liam McIlvanney sets the bar rightly high when he makes comparisons: “Like James Ellroy and David Peace, Eoin McNamee makes visceral fictions from the hidden history of his native place. McNamee’s prose has the cadenced majesty of McCarthy or DeLillo, but the vision it enacts is all his own.”

Eddie McCrink, the fictional detective returned from London who is put in charge of the case, is put under pressure from the establishment, the real-life unionist leaders Harry West (“rule by fear, reward by favour” sums up an RUC man) and Brian Faulkner, to pin the murder to McGladdery so that society could be avenged and the law upheld while justice could go hang.

McCrink, a damaged figure nursing a broken marriage and with no stake in this society, is more concerned with the truth, and is inexorably drawn to the Curran murder, revisiting the scene of that crime, seeing a bloodstain on a bedroom floor although the body was found outside, and interviewing the judge’s wife in the mental hospital to which she has been committed, coming to the conclusion that the McGladdery trial would result in “a guilty man hanging an innocent man”.

Despite the tantalising theorising of both his novels on the subject, McNamee insists that his finger does not point but merely holds the pen. “I’ve always said when people ask me what I think happened that it was speculation that got Iain Hay Gordon convicted of the crime in the first place. I don’t want to add my speculation to that. I suppose in a way I have as much insight as anyone else. There is no certainty to the case at all.”

Are his fictions not speculative attempts at the truth? “No, I don’t think so. I think with Blue Tango I became as much interested in who Patricia Curran was, almost a proto-feminist character, a very independent young woman. Her character assassination after her death, all the affairs and so on – that interested me. What the books do is recount the story and build fiction around that. It’s speculative in the sense you develop characters and put words in their mouths but the skeleton of fact remains.

“I often feel if you get the art right, the truth tends to follow. Someone said the job of the artist is to deepen the mystery, there aren’t any easy solutions and I’m not trying to offer any. I would like people to come away with an appreciation of the depth of humanity and the mysteries of life, not offer glib solutions. This is where my books differ from the crime genre where things are tied up neatly at the end.”

It is understandable, commendable even, that McNamee does not wish to assign guilt to a real-life character, but is be prepared to say he is convinced of McGladdery’s innocence?

“No, I wouldn’t say that, but I would say from a forensic point of view – I did a law degree a long time ago – a man whose 19-year-old daughter had been murdered 19 years previously should not have been put in charge of a case where a man is charged with murdering a 19-year-old girl in similar circumstances.

“The judge was not legitimate, then the court was not legitimate and McGladdery should not have hanged. I don’t think he should have been hanged on the evidence put before the court anyway. The police picked McGladdery as a suspect and didn’t investigate anyone else. McGladdery’s own character didn’t help his case one bit. But this was a society where Faulkner writes ‘let the law take its course’ on a document turning down the appeal. Faulkner thought the law was one thing, justice another. So there has to be doubts but I’m not saying McGladdery didn’t do it.”

There is a principle that justice must not only be done but be seen to be done. McNamee sets out to show how under a corrupt Stormont regime, justice was not done and that the law, far from being blind, was blinkered, and sought vengeance, not the truth.

“I suppose I was always interested in the character of Curran. He epitomised for me a corrupt authority, which was the government of the North over 50 years of Stormont. In a deeper sense I was interested in how people become corrupted.

“There’s always a moment when something clicks and you find your way into a subject,” says McNamee. “I didn’t actually realise [about Curran’s connection to the McGladdery case]. I went to the newspaper archive and read Lance Curran’s charge to the jury. I remember sitting on this warm summer’s night in the Central Library in Belfast and a chill went down my back when I read the last page if his charge to the jury. It more or less undermined the two planks of McGladdery’s defence which should have been left to the jury to decide.”

Did he feel that Curran had acted like judge, jury and executioner? “It very much read like that. I mean the case was very complex, all the evidence was circumstantial and there was six days of evidence, but the jury came back within 45 minutes, they barely had time to sit down.”

McNamee has come in for more than his share of grief for having the temerity to make fiction out of notorious murders. The Belfast UDA even tried to sue the makers of the film version of Resurrection Man, which was almost funny, he says. “There was an underlying nasty note of what’s this Catholic doing writing about this,” but he makes no apology for pursuing a subject that he feel was staring in his face growing up.

“People used to say to me why do you write about the Troubles in general or the Butchers in particular? I always thought, why would you not write about it, these things happened on your doorstep. I remember a painter at art college in Belfast in the 70s teaching about the radicalism of German Expressionism while bombs were going off outside. Look outside the window! A lot of people didn’t look out the window, but a lot of writers from my generation tried to take responsibility for what was going on with the tools at our disposal.

“Crimes are stories with inherent drama in them. Why would you not write about them? For example, I had no interest in Diana or any of her pomps or doings, until I opened Death of a Princess in a second-hand bookshop and felt this atmosphere of Graham Greene, eastern European intrigue. Her story, till I got into it, seemed to belong to a lurid kind of journalism, like the Kennedy assassination, what Don De Lillo called the sinister buzz of implication, the ripples spreading out from it.

“When you write fiction you write within certain structures that work. Factual stories offer different structures, they only work because they actually happened, otherwise they would be too far-fetched.”

If McNamee’s subject matter is dark and ugly – violent death, cover-ups, conspiracies and corruption – his writing style is in stark contrast lyrical and heightened, full of finely-wrought passages and memorable turns of phrase – for example, McGladdery and his friend finding a hiding place to smoke becomes “an apprenticeship in the clandestine” – punctuated too by staccato sentences, a masterpiece of small-town gothic and the “dark grammar” of murder.