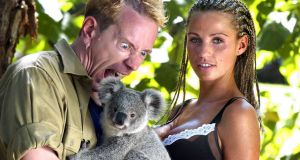 John Lydon and Jordan in I’m a Celebrity, Get Me Out Of Here! Greg Garrett remembers Tertullian’s warning that Christians should not watch gladiatorial games. He reminds us we create our own Hunger Games when in the spirit of entertainment we watch celebrities endure all manner of horror in reality survival shows. But we need to be careful: “consuming torture as entertainment is sure somehow to be bad for the soul”

The undead are everywhere, if you are brave enough to look for them. Blood-sucking capitalists develop ghost estates, which the residents think of as hell. The residents turn to classic novels, which are fictions that refuse to die, until, that is, they are invaded by zombies. We reach for the language of last things when we want to insist that something of ultimate importance is (as it were) at stake. In culture and politics, the language of afterlife provides us with a stock of metaphor and cliche that hits the nail on the head when we want to drive the final nail in the coffin or lay some ghosts to rest. These metaphors are all dead. So why do they still work?

Entertaining judgement sets out to describe the popularity of images of the afterlife in popular imagination. Drawing on examples from art, architecture, graphic novels, computer games, theatre, film, music, fiction and poetry, Greg Garrett’s new book illustrates the extent to which artefacts from both popular and high culture resonate with eschatological themes. His work ranges into politics, economics and the literature of health, reminding us that even the Centres for Disease Control has exhorted US citizens to prepare for a zombie apocalypse. After all, they argue, if you can survive that, you can survive anything.

Garrett frankly admits that many of his readers will find these images of the afterlife to be absurd, but he wants to explain why, when, and where, these images continue to work. His book is a bright and energetic discussion of death and what many people believe to be its consequents – angels, heaven, purgatory, hell, the devil, demons, and the undead. He writes about those who create these images, and those who consume them. In writing about the undead, Garrett is writing about ourselves.

But Garrett is also writing about himself. He is a professor of English literature at Baylor University, Texas, and, we eventually learn, a former Episcopalian seminarian. He is a man of parts, who has written several accounts of the relationship between theology and popular culture, and whose novel, Free Bird (2002), was nominated for a Pulitzer. And, as a seminarian, he has watched people die. As we have, he argues. We consume death in the popular imagination partly because so few of us have seen it and because even fewer of us have experienced it. Death has not consumed us, but we have consumed it.

To make this case, Entertaining judgement draws upon a vast range of artefacts, creating a cultural bricolage of hope and fear in which Augustine and Alexander Pope brush against Calvin and Chris Martin. This broad cultural context does not allow for a simple analysis driven by a particular religious agenda. In a sweeping discussion of high and popular culture, Garrett argues that our expectations of life after death are not always driven by hope. Clark Kent’s ontological transformations may represent an aspiration for human flourishing, and Superman may well be one of the better angels of our nature. And yet, as Rainer Maria Rilke teaches us in the Duino Elegies, every angel is terrifying.

But no angels are more terrifying than fallen angels, and in the popular imagination, demons are everywhere. The most famous may be Batman, who is “trying to clean up hell using many of hell’s own methods” in a city that is “as close to hell on earth as we can imagine”– though the residents of the latest territory to fall to Isis may wish to disagree.

Garrett demonstrates that the hyperbole associated with eschatological language may blunt our moral vision in the present. “A failure to take ourselves and our own evil seriously may be one of the implications of populating our sacred and secular stories with demons and devils,” Garrett explains. “Rather than force ourselves to be complicit in our own deeds,” stories about demons and the undead “can become our excuse to shirk full responsibility.” They create a world of evil which is, ironically, more palatable than that in which we live. We populate our imaginations with figures of evil because we are so reluctant to confront them in real life.

Behind his cultural analysis, Garrett is weaving a theological argument. He remembers Tertullian’s warning that Christians should not watch gladiatorial games. He suggests that Suzanne Collins’s Mockingjay may present one of the most probing statements of the question as to whether humanity deserves to survive. And yet, Garrett reminds us, we create our own Hunger Games when in the spirit of entertainment we watch celebrities endure all manner of horror in reality survival shows. But we need to be careful: “consuming torture as entertainment is sure somehow to be bad for the soul”. We like stories about demons, perhaps because we struggle to differentiate ourselves from them.

Entertaining judgement is also interested in ideas of redemption. Garrett draws on a number of recent films to argue that images of the afterlife have moved away from older ideas of retribution and judgement to develop new themes of redemption and development. This is purgatory writ large, in which death is not the gateway to judgement but to a new capacity for self-improvement leading to happiness for everyone.

Garrett is right to notice the ubiquity of this theme, of which he seems to approve. But he doesn’t draw attention to the fact that this new focus on posthumous and universal redemption is also at odds with the development of moral responsibility in the present. His claim that “there is almost nothing in the Bible about going to heaven and still less about hell” seriously misses the point – witness the frightening words of Jesus in Mark 9.

There is, in the ubiquity of images of the afterlife, no escape from the final reckoning. We need only turn to the Irish Constitution to be reminded that “all actions both of men and States” must be referred “the Most Holy Trinity, from Whom is all authority”. The constitution is governed by the same language of eschatological responsibility that permeates the broader culture, even as its interpreters refuse to take its claims at face value. But, as Entertaining judgement reminds us, the problem with dead metaphors – even in Irish law – is that they will keep coming back to haunt us.