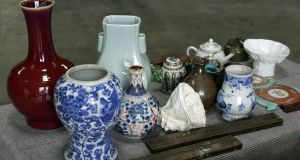 European demand for porcelain meant that by 1800 the product’s production, style and market was firmly western based, Photograph: Frank Miller

Book Title:
Empire of Things: How We Became A World of Consumers, from the Fifteenth Century to the Twenty-First

Whether a mixed blessing or an essential component of modern existence, there is no doubt that consumerism, that is, the supposed need and prevailing demand for a wide selection of various material items sourced from a multitude of locations, is an integral part of twenty-first century life.

However, while we might regard this lifestyle as a purely modern phenomenon it should not be forgotten that earlier generations also sought to source, gather and ultimately utilise both goods and services from elsewhere. Therefore, while we have obtained a level of consumerism previously unknown to our forefathers the roots of this trend stretch far back into our past. Frank Trentmann’s book charts the origins of consumerism in order both to analyse and understand its causes, side effects and ultimate trajectory.

Debates about the topic of consumerism and consumption of goods have raged for centuries with authorities such as the Roman philosopher Seneca, Karl Marx and the founding father of historical economics Wilhelm Roscher all having their say on its merits and shortcomings as well as its origin and future.

With these debates in mind, Frank Trentmann in his study through the realistic perspective of historical analysis seeks to chart the life cycle of consumption, notably the demand for goods, acquisition of products, usage of items, collection of resources and finally disposal of used materials.

Arguing that the study of the consumer has since the 1980s and 1990s been undertaken by a series of unsuitable researchers such as anthropologists, who instead of viewing goods for their practical applications saw the consumer as a purchaser of items, based on their cultural significance rather then their practical and affordable traits, Trentman in this book seeks to explore this everyday practical reason for consumption.

Therefore, utilising his background as a professor of history at Birkbeck College, University of London, Trentmann seeks to analyse his topic through the use of historical trends, which chart the transformation of attitudes, philosophies and cultures over periods of time. Through these means he proposes that by careful research of the historical trajectory of consumerism we can uncover its long-term implications and evaluate potential solutions caused by humanity’s increasing addiction to the overconsumption and waste of resources.

Subsequently, he explores numerous trends such as the fact that consumer demand has often altered the cultural traditions of nations and forced governments to frequently transform internal economic and social policies to meet the needs of public consumption. An interesting example of this social and economic interaction across international boundaries is the history of porcelain. By 1700 China had held a monopoly on the porcelain market, being its sole producer and adorning its products with cultural and symbolic elements of purely Chinese origin. Gradually, however, European demand for porcelain meant that not only was “China” produced to match western tastes, with European designs frequently adorning the product to increase market demand and value, but it was also latterly imitated and mass produced by British factories, meaning that by 1800 the product’s production, style and market was firmly western based. Therefore through western consumers’ demand for porcelain “China” underwent a drastic change from a purely Chinese product to an item used across the globe regardless of its origins.

Moreover, consumerism has shown its ability to adapt to a series of political and social landscapes as individuals and governments seek to use their wealth for the attainment of prestige goods and services. For instance, despite Maoist designs during the Cultural Revolution the desire in China for greater choice of goods has seen the rise of consumer culture in the nation since the 1990s with TV slots and shows such as the Consumer’s Friend glamorising consumer culture to increase an appetite for the public’s consumption of goods thereby aiding subsequent national economic growth and increasing Chinese influence globally.

However, while Trentmann gives enormous detail on the rise of consumerism, he also deals with a series of political thoughts on the subject discussing Marxist and neo-liberal agendas and detailing both their successes and shortcomings. This is seen in Trentmann’s weighted description of many economic models throughout history such as his belief that rigid adherence to the ideals of Marxism east the Berlin Wall was to blame partially for the average worker’s complete loss of confidence and pride in his own locally produced products.

The author also explores various contemporary political arguments about whether the demand for goods and services is driven by public or private investment or is the world transiting from a materialistic base, where individuals’ desires was satisfield in the acquisition of goods, to one where experiences are central to a person’s self-worth, (an idea Trentmann himself disputes given that by 2012 demand for goods in the world’s richest goods was larger than in 2008).

With such an enormous scope it is fair to say that the author has been able for the most part to produce a thoroughly encapsulating and enjoyable account, which is well written and very accessible to academic and non-academic audiences. Laden with fascinating insights and accounts, the result no doubt of extensive research, this study spans not only six centuries and numerous civilisations, cultures and individuals but also finds time to comment on the beginnings, direction and outcomes of consumerism itself. This is a hugely impressive undertaking and an ambitious narrative. Moreover, the study strenuously challenges the nature, direction and consequences of consumerism in its modern form.