Elif Shafak: ‘Being an artist in Turkey is a constant struggle’

Interview: Once you are immersed in the novelist’s multilayered, multiculural world, you want to dive deeper. But Shafak has paid for her willingness to cross cultural and political divides 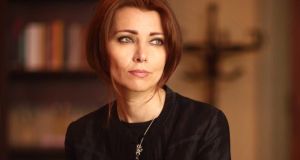 Elif Shafak: ‘In a collectivistic, patriarchal society, writers and artists try to carve out an independent and individual space for themselves.’ Photograph: Zeynel Abidin

Elif Shafak is a writer whose work is still, for many, a secret treasure trove. You know of her, you’ve read reviews, but, falling as it does just outside the comfort zone for many English-language readers, Shafak’s immense talent has yet to be fully celebrated in Ireland. Stepping into the writing of this Turkish-born author for the first time is like breaking through the back of a children’s wardrobe and walking into a whole new multicultural world of lives and histories – and, above all, fabulous stories.

Having established herself as a major world literature contender with nine novels and 13 books in all, Shafak defies the kind of categorisation the literary world tends to foist upon writers. Her stories offer a fusion of historical, geographical and political themes that brim with cross-cultural complexities, generational layering and gender issues. She is also highly in demand as a public speaker, columnist, arts advocate and political scientist.

The first-born child of a philosopher and a diplomat, Shafak grew up as an only child, following her mother’s career to postings like Madrid and Amman before going on to live and work in London, Arizona and Istanbul. As a girl, she filled lonely hours with the worlds of her books, and in her adult travels imbibed the cultures she encountered voraciously. Her work often evinces the plight of the nomad, set in a truly international world, whether historical or contemporary, that blurs boundaries and resounds with a distinctive Turkish-Persian flair and humour.

“I am a nomad, in soul, heart and mind,” she says. “I don’t believe that we need to make either/or choices between the cultures we come from and universal citizenship. I am an Istanbulite and I am a Londoner. There is a part of me that is from the Middle East and another part is attached to the Balkans and the Mediterranean. I am a European by the ideals I embrace, by my mindset. And I am a global soul. All of these at the same time.”

Like her peers Louise Erdrich, Isabel Allende and Kamila Shamsie, Shafak explores the human psyche through family relationships, and over generations. In Honour, she tells the tale of two generations of the Toprak family, originating in a small village on the Euphrates in the early 1960s and culminating in punk-era London. By crossing generations and continents, she conveys with heart-rending conviction the often lonely world of the emigrant, and the deep conflict of children born into a new culture.

“I am always amazed to see the extent and the depth of ongoing cultural, social and intellectual gaps. There are also generational gaps,” she notes. “And gender gaps. I worry about these. Many of our political clashes stem from these voids in our understanding. Stories help us in this regard, because they build bridges of empathy. The gaps do not disappear with the stories, perhaps, but they do become visible, almost tangible. It becomes possible to walk over these empty spaces and reach the other, and even to understand him/her a little bit. If we lose our ability to empathise, the world will be a darker place.”

Such empty spaces were broached, for example, in her lively and daring novel The Bastard of Istanbul, where she addressed the issue of the Armenian genocide by making the Armenian voice that of a first generation Armenian-American, in conversation with a young Turkish woman. “The Sufis used to see time as a dancing circle, or rather as circles within circles, instead of a linear thing. In other words, the past is not bygone. It continues to breathe inside the present moment. We have to remember, not in order to get stuck in the past, but hopefully, to build a better and more peaceful future.”

Such brave departures into political realms, however, had dangerous consequences for the writer, then living in Istanbul. In 2006, under Article 301 of Turkish law, she was charged – like her fellow Turkish author Orhan Pamuk before her – with allegedly “insulting Turkishness”. Although eventually acquitted of a crime that could have seen her spend three years in prison, the experience highlighted the dangers of being an artist under an increasingly repressive regime.

“Being an artist in Turkey is a constant struggle,” she says. “If you are a woman, the struggle is harder. In a collectivistic, patriarchal society, writers and artists try to carve out an independent and individual space for themselves. The education system does not encourage creativity. The culture, in general, treats difference as a problem. There is an ideology of sameness, which I find very problematic. We should resist any emotional nationalism that reduces us to a single identity.”

During an event at the International Festival of Literature in Dublin last week, which coincided with extensive commemorations in Turkey of the Armenian genocide, Shafak was asked how she felt about the renewed focus on the tragedy. It’s an issue that she is still passionate about.

“1915 is a bleeding wound in our consciousness. It was a massive human tragedy, but for a long time Turkish society has been strangely silent about it or unaware of it. We need to understand, we need to talk and we need to listen to the other side.

“Turkey is a society of collective amnesia. Everything is written in water in my motherland, except architecture and literature. But I think memory is a responsibility.”

In The Architect’s Apprentice, Shafak’s latest novel, the concept of using architecture as a metaphor for statesmanship is beautifully rendered. Set in 16th-century Istanbul, at the apogee of the Ottoman empire, the brutality and ruthlessness of the regime in power is countered against the life and work of the master architect, Mimar Sinan, whose mosques, palaces and bridges can still be visited in present-day Turkey.

Once tuned into the work of Shafak, it is hard not to dive in and immerse oneself completely. Her style is extremely accessible, yet contains infusions of mysticism, philosophy and magic realism that evince a deep spirituality and compassion. Overall, it is the story and the passionate telling of it that distinguishes the work of Elif Shafak.

“I am not a religious person at all. But I am interested in spirituality and mysticism and inner-oriented spiritual journeys all around the world,” she says. “To be human means to embody at least several conflicting and co-existing selves within. It is the job of the novelist to peel off those layers and show the heart that beats underneath. We are living in a Manichean world where good/bad, beautiful/ugly, West/East, modern/traditional, masculine/feminine and many other dualities are taken for granted. I want to question these dualities. I want to show the East within the West and the West within the East. I believe that as human beings we can have multiple belongings. We can dream in more than one language.”