From boxing to racing and from fact to fiction, a personal selection of the greatest stories about sport 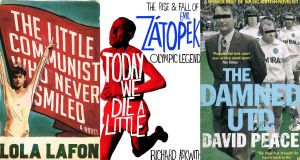 In our era of bigly despair, the only hope is sport. Broken with disappointment on reading Ross Raisin’s A Natural, which is very good on the art of perfect pitches but insufficiently passionate about sport, the dejected reader might like turning instead to any of the following:

The Damned Utd by David Peace

Perhaps the great football book has already been written as most players and fans will concede that the true divas are the deranged managers – the players just play and the fans implode. The Damned Utd makes Nick Hornby’s Fever Pitch seem very tame – but then Fever Pitch is the one for your aunt, The Damned Utd is the one intended for the strong-willed and mean; the readers who know that sport is the ultimate theatre. Your aunt may not quite see it that way…

The Little Communist Who Never Smiled by Lola Lafon, translated by Nick Caistor

This is brilliant, the story of the Romanian gymnast Nadia Comaneci. It explores her art, her determination, the pressures which made her both from within and without, the politics which defined her. The expected mix of triumph and frustration but also the tyranny of the female body as a little girl matures, much to the resentment of the watching world but more importantly to her as an athlete.

The Natural by Bernard Malamud

OK, this is a comic masterpiece but this places sport at the rightful centre of the universe and in the form of a hero – in this case, an American hero – and in that most powerful of transitions, the end of a great career. In this case, he is a baseball player. Do not discount baseball….there is a library of great to good to pretty useful baseball books. Just thought I’d mention that…

Large physical object, good for weight training. Will impress your friends – and what a wonderful opening sequence at a ball game…

I don’t like boxing but this is a terrific read. And as one of the sport’s greatest fans, Norman Mailer’s The Fight, his dramatic study of the world heavyweight championship bout between the ageing Muhammad Ali and the pretender, George Foreman, in Zaire in 1975, yet again reiterates that sport inspires supreme and lasting journalism.

In 1938, at the height of the American Depression and with Hitler and Mussolini at full throttle and with war looming, a little thoroughbred with bandy legs and a huge heart bestrode the imaginations of anyone in possession of one. Undertaken as a New Yorker article, it became an inspiring and exciting book.

A River Runs Through It by Norman Maclean

“….We lived at the junction of great trout rivers in western Montana, and our father was a Presbyterian minister and a fly fisherman who tied his own flies and taught others…..” All the beauty, all the poetry of fly fishing contained within a human tragedy. Maclean has a story to tell yet never loses sight of the art of fly fishing.

As a reader who skulked about for days moaning that I was the only person in the western world who didn’t like Tsiolkas’s The Slap – the first Australian novel that had left me cold – was I wary of this one. But swimming is a religion in which millions of bleary-eyed parents who have never gotten into a pool have also been involved. This is a big book and Tsiolkas is an overbearing writer but his central character experiences a catastrophic reaction to defeat…it is a book containing some staggering set pieces such as the Sydney Olympics. Coarse, bloated, angry and well, it is worth reading… it really explores the agony of discovering your best is not good enough.

The Dirtiest Race in History by Richard Moore

Anything you ever thought you knew about fair play goes out the window in this. Well I remember watching the surging impossibility of Canadian Ben Johnson exploding down the Seoul track in the Olympic 100 metres final in 1988. It looked unreal because it was unreal. Moore has written several good books on cycling, and he was well able to take on this thriller…wait a minute? Are we talking about sport?

The Invisible Mile by David Coventry

In 1928, an ANZAC team – five cyclists from Australia and New Zealand – got together to become the first English-speaking team to compete in the Tour de France. I am not saying this is a great novel, it’s not, but it has wonderful source material. I don’t know why Coventry wrote it as a novel when he had the means of writing a brilliant history. But prose style aside, it is a great story.

Federer and Me – A Story of Obsession by William Skidelsky

I am not obsessed with Federer, but Skidelsky, who would strike most observers as perfectly normal, is beyond obsessed. This is what can happen to a fan – possibly he wrote the book in the winter, during bad weather and when he had no electricity to power his TV. It is a complete, absorbing and frankly bonkers study but tennis fans, look no further.

The Match by Romesh Gunesekera

If sport is a religion – we agree it is – then cricket is beyond passion, beyond religion, nay life itself. And so the Sri Lankan team arrive in London to play at the Oval. Stone me in the street but I prefer this to Joseph O’Neill’s Netherland (which is also very good) but just not quite as appealing – or believable.

Another fan but Richard Askwith is far more self-controlled than Skidelsky and the great Zatopek was dead, so this very good book is far less zany but a tremendous read and also a reminder of the lost purity of track and field.