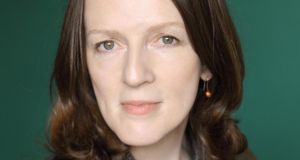 Michèle Forbes is also an award-winning actor, and her insight into the world of performance is astute

How well can we really know the people we fall in love with? The warning signs of a doomed romance are there from the beginning of Michèle Forbes’s anticipated second novel, Edith & Oliver.

Edith, a piano player, is drawn to Oliver, a charismatic illusionist, in the seedy music-hall world of early 20th-century Belfast. They spend a drunken night together that will determine their future, despite the fact that Oliver remembers little of it. In a vivid opening section that conjures up the tawdry glamour of the showbiz world of 1906, the relationship is born out of a night that seems more madness than magic. Edith wakes up with a hangover and a bruised face, the result of letting Oliver extract a rotten tooth. It the first of many metaphors in a novel that is heavy with figurative language and meanings.

A prologue set in Dún Laoghaire harbour in 1922, when a tearful Edith waits with her teenage daughter for a boat to Britain, alerts us to the tragedies that will be slowly, at times painstakingly, revealed over the course of the narrative.

As with her critically acclaimed debut, Ghost Moth, Forbes looks at the toll that marriage takes on an individual’s dreams, exploring how the two are often incompatible.

Just as the mezzo-soprano protagonist of Ghost Moth sacrifices her career for motherhood, it is Edith’s livelihood that takes the hit when the pair discover that she is pregnant with twins. A swift marriage and relocation to Huddersfield, in England, sees Edith strive to create a nurturing family environment, with the help of a kindly older couple, while Oliver goes on the road in search of fame and fortune.

For Edith it’s a case of now you see him, now you don’t. This virtual abandonment of her and the children for a number of years somehow doesn’t diminish her affections. Edith has bought into the illusion of Oliver and his fantasies of success.

Forbes is not the first Northern Irish novelist to deal in disillusion and marital decline. Jennifer Johnston’s The Illusionist, from 1995, covers similar terrain in a more reflective way, as a wife looks back on a chance meeting with a stranger on a train and the ill-fated marriage that ensues after she’s entranced by his sleight of hand.

The secret selves that couples keep hidden from each other are central to both books. Oliver’s back story as the youngest son of a staunchly Protestant and controlling father comes to haunt his present. The past repeating itself is a staple of fiction, although in this instance characters’ actions are not allowed speak for themselves, as Forbes spells out her themes for the reader.

With a dizzying number of characters, descriptions are colourful, although often delivered formulaically: “Sydney Browne has a bloated reptilian look about him.” There are many examples of tired and leading language: “Her face runs the gamut from mild curiosity to disgust”; “There’s something dark and primeval about Divitt, something sinister.”

It is a shame, for elsewhere Forbes’s imagery shows her obvious talent: “a wet loaf of a brain”; a baby crying like the “fret of a kitten”; “the rinsed cobalt of a winter morning then the seep of afternoon purple – the world reduced to a simple square of sky”.

As most of the novel is given over to Oliver and his demons, Edith is nowhere near as central to it as the book’s title would suggest. Her voice is a welcome respite. Other seeminglty random narrative shifts to the twins, Archie and Agna, draw attention to themselves and leave the reader asking, Why now and not then?

There is a muddiness to the book with major events – the first World War, Agna’s refusal to speak, the breakdown in the relationship between Oliver and his brother Edwin – only touched on.

Later scenes back in Belfast, where Edwin throws the destitute Oliver and his family a lifeline, are melodramatic in their dialogue and twists, with events piling on top of each other as the novel reaches its far-fetched climax.

The first third of the book is by far the most engaging, with Forbes skilfully depicting Edith’s new role as a mother, Oliver’s fervour for his career, and an industry that seems stacked against him as it modernises.

Born in Belfast, Forbes is an award-winning theatre, television and film actor, and her insight into the world of performance and talent – particularly wasted talent turned rancid – is astute. Oliver’s hubris – his downfall – is striking in his increasingly wretched attempts at stardom.

The book is more about Oliver’s own disintegration than it is about his marriage. “But we were good together,” Edith says at one point. “We were life’s double-act, we were Edith and Oliver.” There is little sense of this in a story that is more seeing than believing.