Ebook reviews: Four ways to zoom in on the dense weave of Wagner’s life

Reviews: The Wagner Files; Red Rosa: A Graphic Biography of Rosa Luxemburg; The Thrilling Adventures of Lovelace and Babbage 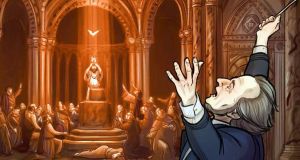 One of the most important political books published in 2015 was The Arab of the Future: A Childhood in the Middle East, a graphic memoir by Riad Sattouf.

Sattouf grew up in Syria, Libya and Paris, where he still lives and where he was a cartoonist with French satirical magazine Charlie Hebdo for more than 10 years. His personal account of a peripatetic, cross-cultural childhood gets to the root of many of the political problems still plaguing the Middle East today, and the effects they have had on Europe.

Sattouf’s book has yet to be published in digital format. However, several of the best graphic books of 2015 also belong to the non-fiction genre, and they showcase some of the best and worst features of digital literature.

The Wagner Files by Andreas Vollinger and Flavia Scuderi (ios, €2.69) is an interactive graphic biography of composer Richard Wagner. It frames the facts of his dramatic life through the eyes of one of his proteges, conductor Hans von Bulow, a minor figure in 19th-century classical music.

We first meet Wagner when he is a working conductor, keen to make his mark both as a composer and as a republican revolutionary. The book charts his exile to Zurich, his early success in Paris, his relationship with Bavarian king Louis II, the completion of the Ring cycle, the building of the Bayreuth Festspielhaus, and the culmination of his life’s work with the first performance of Parsifal.

We also witness his domestic challenges, not least those due to his elopement with von Bulow’s wife, Cosima, who was fellow-composer Franz Liszt’s daughter.

The Wagner Files offers four different modes for reading: autoplay mode, which essentially turns the book into a film; graphic novel mode, which allows you to read it as a paperback, with the added ability to zoom in; and two types of animation mode, with or without narration, which display the content panel by panel.

The silent animation mode is the most effective: the slow movement from panel to panel, and the slow reveal of the text, create a suspenseful pace and leave plenty of time to scan the images. Vollinger crams a lot of detail into 41 pages, and facts are supplemented by primary material whenever a glowing blue dot appears on the screen, giving extra meat to the story. In its finest moments, Scuderi’s graphic style blends documentary scenes against backdrops of Wagner’s defining inspiration.

Wagner’s compositions are used sparingly as a soundtrack and provide a subtle complement to the story. The Wagner Files is a great introduction to the life and work of one of classical music’s most controversial figures.

Red Rosa: A Graphic Biography of Rosa Luxemburg (Kindle, £9.49) by Kate Evans begins with an explanatory flyleaf that stresses the book’s emphasis on accuracy. Evans uses photographic material to create the book’s distinctive style, and recorded conversations provide as much of the dialogue as possible, although some are reframed as conversations with her cat, Mimi.

There are no added extras with the ebook edition, and the quality of the reading device will determine the quality of reproduction. On a tablet, the black and white tones are crisp and clear, and you can use a zoom function to appreciate the detail of Evans’s sketches. Red Rosa has been such a success that it is currently unavailable in print format until the end of this month, showcasing the distinct advantage of digital books.

Two lesser-known historical figures are brought to life with a blend of fact and fiction in The Thrilling Adventures of Lovelace and Babbage: The (Mostly) True Story of the First Computer (Kindle, £9.99) by Sydney Padua. Ada Lovelace is mostly known (if she is known at all) as Lord Byron’s daughter, while Charles Babbage’s fame is largely limited to the realm of economics and science. Together they (almost) invented the first computer. In Padua’s “pocket universe”, their Analytic Engine is a great working success, and they go on to “have thrilling ADVENTURES AND FIGHT CRIME!”

Padua’s illustrations have a contemporary Steampunk feel. The crisp black and white cartoons boast dramatic facial expressions, and the typography is full of EXCLAMATION! With her wasp waist and large eyes, Ada is a heroine to appeal to young women, and the role reversal, which casts Babbage as her sidekick rather than her teacher, is particularly empowering.

The copious footnotes, however, present a big problem. Firstly, they undermine Padua’s imagined world by reminding us that many of their escapades with figures like Karl Marx and Charles Dickens are not true. Secondly, they are both ugly and distracting, particularly in e-book form.

The book originated as a web-comic, and Padua has lost an opportunity to capitalise on the digital platform. A more interactive approach, as showcased by The Wagner Files, would have resolved the problem.

Colum McCann on Israel-Palestine: ‘I was completely ignorant of what was going on’
2

Zoë Kravitz: ‘I did a lot of dumb stuff in my 20s’
Real news has value SUBSCRIBE