The Belfast writer and artist’s well-loved picture books have given him a public profile that has aided his success in fine-art circles. Now a show based on one of his books is at Baboró in Galway 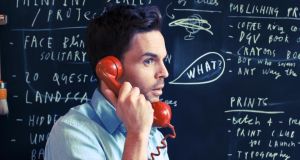 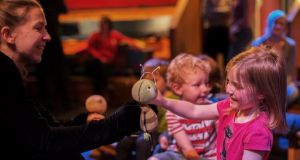 Branar’s adaptation of The Way Back Home at The Ark, Dublin. Photograph: Pedro Giaquinto courtesy of Dublin Theatre Festival

It is easy to recognise the characters of Oliver Jeffers’s picture books. They have large, spherical heads and thin, lace-like legs that carry them on improbable adventures. The boy from his best-selling quartet – How to Catch a Star; The Way Back Home; Lost and Found; and Up and Down – is one of his signature heroes. With his pin-prick eyes and invisible mouth, Jeffers finds emotional expression through the juxtaposition of his visual scenarios and spare, pithy text. It is a winning formula that the Belfast writer and artist has applied to the 14 picture books he has written since How to Catch a Star was first published 10 years ago.

Jeffers began making picture books by accident. He trained in visual communication at the University of Ulster, and, following graduation, he experimented with painting, printmaking, design and installation, but his work was always narrative-based. He was playing around with words and image when the opening image of To Catch a Star struck him, and “it occurred to me that the individual images would be better served by a book. I started stringing them together and realised I had a story, and that suited me, as I have always loved storytelling.”

Jeffers didn’t – and doesn’t – consider the age of the reader when writing picture books, which have become something of a crossover market over the past few years, appealing as much to adults as to children. “To be honest, I write the books for myself,” he says. “I leave it up to my publisher to decide who the books are appropriate for. I just follow my gut for the story and it has worked for me.”

It has also ensured his work appeals to a variety of age groups. “The boy” books, with their simple stories about friendship and imagination, will appeal to three-year-olds or over, while Heart in a Bottle holds metaphorical richness for the pre-teen reader.

When he began writing, Jeffers had no idea his work would be published. “I worked in Waterstones,” he says. “I knew a bit about how tough the industry was, but I put together a really tight pitch and worked the manuscript as best as I could, and it landed on the right desk at the right time.” It helped, he says, “that there wasn’t really a lot of good picture-book work around at the time I started, though things have come on considerably since then.”

Jeffers still paints, and his picture books have given him a public profile that has aided his success in fine-art circles. Writing and illustration has had an influence on the type of paintings he makes, and ideas from one world frequently bleed into another. His first solo show, for example, was inspired by quantum mechanics and the opposing forces of emotion and logic. “The paintings were figurative, with scientific equations layered on top,” he says. Jeffers used the same visual stamp for his story of The Incredible Book Eating Boy, published the same year, in which a young boy literally devours a library of volumes in a quest for knowledge.

In the notebooks Jeffers compiles as he moves around New York, where he has been based for more than a decade, he collects scraps of stories, doodles, and random notes, and he doesn’t distinguish between his fine-art fancies and picture-book patchworks; he lets the idea dictate the form. “The books tell stories,” he says. “But the paintings allow me to ask questions without answering them, and to follow more vague or nebulous ideas.”

His latest picture book, Once Upon an Alphabet is drawn directly from some of his notebook ideas. “I found I had all these short stories and sketches in the notebooks and I was trying to work out what to do with them. I was interested in doing a concept book; I thought I would probably do an alphabet book at some stage, and this became a way of using the alphabet as a framing device for the stories.” The result is an absurdist exploration of the alphabet that indulges Jeffers’s dry wit and will entertain adults as it instructs older children in their ABCs, but many of the images would also work well as individual prints.

Jeffers says there are also differences in his approach when he is working in different media. “There is a certain sense of humour in my art that you might not find in the picture books, and a sweetness in the picture books that you will probably find lacking in the art.”

However, Jeffers doesn’t see one as superior to the other. “Those sorts of boundaries have broken down,” he says, “especially since the last recession, and especially in New York. I think gallery owners, curators and artists all know that you often need another job to support yourself if you want to make art. And it is easier for good work to be seen for what it is too. Some of the biggest names in contemporary art in New York are tattooists, graffiti artists. The idea of the artist has changed.”

The idea of the picture books’ discrete existence has changed for Jeffers too, although he prefers to take a back seat, observing the proliferation of stage and film adaptations of his work from a distance.

Two such projects have just been launched. The Discover Children’s Story Centre in London recently opened an enormous three-dimensional interactive exhibition, The Wonderful World of Oliver Jeffers, including a life-sized rowboat that visitors can use to make the boy’s journey in Lost and Found alongside him. Galway-based theatre company Branar, meanwhile, premiered their stage adaptation of The Way Back Home at the Dublin Theatre Festival earlier this month. The Way Back Home has just transferred to the Baboró International Arts Festival for Children, before heading on an extensive tour. The boy, it seems, looks set for many more adventures.

The Way Back Home is on at the Black Box Theatre, Galway, as part of Baboró from Oct 16-19. Full tour details at branar.ie. Once Upon an Alphabet is published by Harper Collins

Liz Nugent: ‘People have accused me of being brave, but what is brave about surviving?’
4