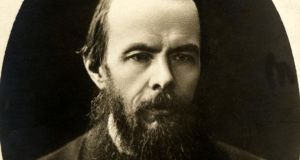 There is a touching passage near the beginning of Alex Christofi’s inventive new memoir, which takes place in a cell at the Peter and Paul Fortress, St Petersburg, on Christmas Eve 1849. The young Fyodor Dostoevsky was about to be taken to a Siberian prison camp but remained defiantly upbeat, reassuring his older brother Mikhail: “I’m not going to my grave, this isn’t my burial – and they aren’t wild animals out there.”

As the clock struck midnight, he was shackled and taken on an open sleigh ride in -40 degrees to begin a four-year sentence for anti-government activities. And this is just the start of the story. It is lucky that Dostoevsky was able to channel the extreme brutality he suffered into creative masterpieces such as Crime and Punishment.

12 Boy injured after bookcase fell on him secures settlement of €80,000

13 Can I see copies of earlier wills my mother wrote?

16 At home with Hilary Weston

20 It’s as if censorship were back: Why Ireland can’t watch Wild Mountain Thyme this month

22 Tenant promises to pay compensation after removing rafters from house

25 ‘He’ll be missed’: Locals turn out to say goodbye to popular shopkeeper

28 Mary Coughlan revisits her past: ‘It was everywhere. Bags of cocaine, champagne and tequila’

29 From First Dates to Naked Attraction: The couples who found love on TV dating shows

30 What now for AstraZeneca and Johnson & Johnson vaccines?

34 Is it sensible to delay vaccines if we are at risk of a fourth wave of the virus?

35 Covid-19: AstraZeneca vaccine should not be given to patients under 60, Niac advises as appointments cancelled

39 Up to 15,000 vaccinations cancelled today following advice on AstraZeneca jab