This important book examines the roots of sectarianism in the context of the declining Protestant population, who formed a ‘non-ascendancy’ quite separate from the landed Anglican elite 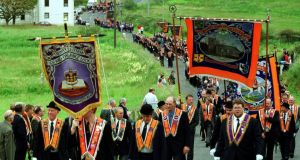 Over the past years the southern Protestant experience of war and revolution has inspired a substantial number of books, articles and RTÉ documentaries, as well as a lively debate in the press. To a large extent this interest was pioneered by David Fitzpatrick and some of his research students. Descendancy represents Fitzpatrick’s latest contribution to such debate, and covers key aspects of the question.

The book consists of nine essays organised into three parts, dealing with Orangeism, the 1912 Ulster Covenant and the postwar Protestant “exodus” from the South. Despite the reference to 1795 in the title, most chapters concern 20th-century topics. Some of them revisit familiar episodes and figures through the forensic analysis of new evidence; others try to settle historiographical disputes, including those about the exodus from the Free State and “the spectre of ‘ethnic cleansing’ in revolutionary Ireland”. (This is the title of the last chapter, which is based on the Parnell Lecture that Fitzpatrick, who is professor of modern history at Trinity College Dublin, gave at the University of Cambridge in 2013.)

Some of these essays are previously unpublished; others have appeared in scholarly journals. Both historians and the general public will be delighted that they are now readily accessible in book format (especially if Cambridge University Press produces a cheaper paperback edition).

The title alludes to the end of the Ascendancy, but Fitzpatrick is not interested here in the Anglican landed elite: instead Descendancy is largely about the middle class – farmers, solicitors, shopkeepers – particularly its Methodist manifestation.

Socially, these people were part of a “non-ascendancy”, and some actually benefited from the initial stages of the crisis of the old elite, particularly through the Land Purchase Acts (1885-1903). Yet they were committed to the preservation of the Union and in this sense were associated with the political (rather than the social and economic) decline of the old order. Hence they too experienced a descendancy, a marginalisation in the post-1922, predominantly Catholic State.

The latter is the book’s central theme, which Fitzpatrick explores first through four essays on aspects of Orangeism, then by reassessing the causes of southern Protestant depopulation from the 1920s. Such problem is tested and examined through two magisterial chapters that focus on the specific case of the Methodists.

His somewhat startling conclusion is that Protestant demographic decline had little to do with violence, the threat of violence or other forms of sectarian behaviour by the Catholic majority. This may work for the Methodists, but Fitzpatrick does not convincingly establish whether their experience was representative of the Protestant community as a whole.

Methodists were a small minority within the minority. Unlike the Church of Ireland, with its territorial presence and political profile, they were not in the front line of intercommunal relations. Working with evidence from both Anglican and “nonconformist” communities, other scholars (including, most recently, Andy Bielenberg and Brian Walker) reach different conclusions.

Bielenberg’s estimate that at least 16 per cent of the Protestant demographic decline was due to “involuntary” emigration remains all too plausible, but even he does not account fully for the grey area between involuntary migration caused by well-attested persecution, on the one hand, and migration caused by softer forms of community pressure, on the other. As Miriam Moffitt and others have shown, low-intensity intimidation could be very effective in scaring away Protestant families, even when it was not necessarily or ostensibly inspired by sectarianism.

In fact Orangemen could be defiant of ecclesiastical sanctions, especially in the field of drink and dances, and disagreed with those ardent Evangelicals who believed that being Protestant was not enough and insisted on the need for a personal conversion. Some Methodists, for example, “missioned” Orangemen, and, as Fitzpatrick himself has shown elsewhere, Bishop Frederick MacNeice, the poet’s father, joined the Orange Order in order to reach out to their members.

In trying to explain sectarianism it is important to bear in mind that it was not a uniquely Irish problem. Indeed, much of the most stimulating work on the subject explores it in a comparative perspective, as illustrated by Timothy Wilson’s study on Ulster and Upper Silesia and Guido Franzinetti’s exploration of the parallels and contrasts between the Balkans and Ireland.

They remind us that, despite its 17th-century precedents, sectarianism is a quintessentially modern and postmodern phenomenon, typical of countries that have experienced revolutions and civil wars. In the 20th century it was often been rooted in religious divides, as in anti-Jewish pogroms, the Spanish Civil War, and ethnic cleansing in the Balkans in the 1990s.

But there was also a sectarianism inspired by purely secular “religions”. Thus hundreds of people were murdered by communist partisans in the Apennine areas of central Italy in 1945-6. Most of them were innocent, in the sense that they posed no military threat, but were killed for their opinions and past allegiance to a fallen regime.

In general such murders were not sanctioned by the provisional government, and they defied rather than fulfilled the political vision of anti-fascism. In this too they represented a good illustration of how sectarianism operates: through direct action by “the people”, organised by low-ranking officials or local clergy. In this way it represented a challenge to the state’s control of legitimate force and to that of the churches over spiritual matters.

In other words, irrespective of rhetoric and imagery, sectarianism’s popular appeal reflected struggles not about ideas or culture but about territory, political power and social control – conflicts about which Descendancy is indeed concerned.