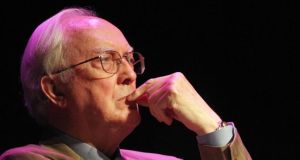 Denis Donoghue: the academic and literary critic has died aged 92

President Michael D Higgins has led tributes to Denis Donoghue, the scholar and literary critic, who has died at the age of 92. He published more than 30 books and held professorships at New York University and his alma mater, University College Dublin. His daughter Emma, the acclaimed novelist, posted news of his death on Twitter overnight.

“An authority on Irish and American literature in their fullest sense, Denis Donoghue was one of the foremost experts on the literary legacies of Ireland, the United States, and England,” the President said.

“His lectures, being ruminations of such depth, reference and reflection across such a wide canvas, were events in their own right. Students and fellow academics would speak of ‘being present’ for those impressive intellectual excursions.”

The novelist Colm Tóibín described one of those lectures in an appreciation he posted on social media. “Denis Donoghue, the man who came to the podium at University College Dublin, in October 1972, was exceedingly tall and distant and formidable. Once he took command of the lectern, he began without explanation or introduction to read from Conrad’s Heart of Darkness,” he wrote.

“The voice reading was dramatic but the tone was not declamatory; it allowed for mystery and quietness. The accent, strangely grand, soon ceased to matter, however, as much as his vocabulary mattered, the heightened tone, the lack of hesitation, the thinking aloud as fierce and eloquent activity, and the sense also that this mattered more than anything else mattered – this attempt to analyse and define and almost imitate layers and levels of feeling, of imaginative energy, of tonal nuance... He was a great teacher and a great man.”

Born in his mother’s home town of Tullow, Co Carlow, in 1928, Donoghue grew up in Warrenpoint, Co Down, where his father, from near Killarney in Co Kerry, was a sergeant with the Royal Ulster Constabulary.

He was appointed to the Henry James chair of English and American letters at NYU in 1980; before that he had been UCD’s first professor of modern English and American literature. He became heavily involved in New York intellectual life, serving as codirector of the city’s Poetics Institute and becoming a fellow of New York Institute for the Humanities.

Denis Donoghue (1 December 1928 - 6 April 2021), rest in peace. Goodbye and God bless to the best of fathers. So proud of all you squeezed into 92 years, and so grateful for the conversations, the teaching, the books, the love. pic.twitter.com/TMTSVLCbHp

Among Donoghue’s published works were important studies of Jonathan Swift and WB Yeats. His interpretation of the latter has proved influential.

JCC Mays, UCD’s former chair of modern English and American literature, said: “I met Denis for the first time for a walk round Howth Head, talking of William Blake and Northrop Frye. At the end of it he told me that this was my interview and I could have the job if I wanted it: we never spoke at such length again.

“This was pretty much how he ran the department: splendidly autocratic, superbly efficient, no democratic extras. He brought UCD English department from nowhere to the attention of the world; we were awed and proud as we watched his ascendancy in the field of letters, and annoyed in turn by his rare appearances to explain what we should be doing.

“I last saw him a couple of years ago, at a dinner party given by his son for (I think) his 90th birthday. He moved around on a little electric machine – more slowly, more obviously kindly, still essentially the same. A unique giant, who went his own way, and I am glad to have known him.”

Andrew Carpenter, former head of school and dean of arts, recalled: “When I first arrived in Dublin, in the summer of 1967, I was lucky enough to be given an introduction to Denis Donoghue, whose wonderful book on Swift had just been published.

“Denis was always gracious, friendly and helpful. He was a valuable mentor to me in the early days of my professional life, and I am sorry to hear that he has gone: I think the world has lost a great scholar and a fine human being.”

Donoghue’s family said that he died, peacefully, at home in Durham, North Carolina, with his wife Melissa at his side. He is survived by his children David, Helen, Hugh, Celia, Mark, Barbara, Stella and Emma; by his grandchildren Adam, Muireann, Dearbhaile, Barra, Aisling, Aoife, Amy, Sinéad, Brianna, Finn and Una; and by his great-grandchildren Molly and Oscar. He was predeceased by his wife Frances.

A memorial service will be held in Dublin at a later date.

Fintan O’Toole writes: I was fortunate enough that my first year in UCD coincided with Denis Donoghue’s last year before he decamped to New York. He was a towering figure in every sense. He spoke and wrote with all the authority of a commanding intellect, but he was always trying to encourage real engagement with literary texts: how does this work? Why does his poem have this effect?

He wasn’t interested in your feelings or your impressions. He was exact and exacting. It was a terrifying and very salutary encounter with rigour and precision – all a bit godlike, but rather more interesting than the prevailing gods of the time.

Denis Donoghue’s presence was especially bracing in a culture that was all too fond of sentimental evasions. To read him was always to be challenged, not just by big ideas but by the razorlike sharpness of his particular perceptions. Like only the very greatest critics, he could be both sweeping and concrete, and he had a prose style that held the two modes together beautifully.

When I was literary editor of The Irish Times I was delighted to be able to get him back into the books pages. I was still so in awe of him that I’m not sure I would have done much editing on his reviews. But I didn’t have to – they were always perfect: elegant, witty, illuminating and, yes, Olympian. There was always a touch of the divine about him.