Brought to Book Q&A: Author of The Judas Kiss and City of Dis on what he reads and how he writes 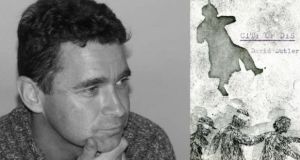 The Elves and the Shoemaker in the Ladybird series.

Through the Looking Glass.

“The mind in creation is as a fading coal, which some invisible influence, like an inconstant wind, awakens to transitory brightness.” (P.B.Shelley)

Which do you prefer - ebooks or the traditional print version?

Traditional print by a country mile!

Almost always in my head, while out walking or suffering bouts of insomnia. Afterwards, almost all “actual” writing consists of (compulsive) rewriting.

Laurence Sterne’s The Life and Opinions of Tristram Shandy, Gentleman.

Very hard to say. The two most recent novels evolved, side by side, over a period of about eight years, drawing in all sorts of experience and research as they grew.

Read. Then read more. Then reread your own writing. Don’t be precious! Learn to become your own best (ie worst) critic. This may mean leaving months and/or other projects between drafts. At all costs, avoid becoming defensive...

Exponentially more self-publishing and e-publishing but without any commensurate increase in reading. A move towards audio, multimedia and hyperlinks.

The short story has made a (welcome) comeback, especially here in Ireland. There’s also been an explosion of literary festivals and competitions. Sadly, social-media-style voting is making a mockery of this trend.

The really great writers, Dostoevsky, say, or Joyce or Rilke, expand and enrich experience, even when describing the mundane.

Patience. Also empathy. As with method acting, to write convincingly from inside a character’s skin is to experience and believe in their loves, their rhythms, their language, their prejudices…

Most scenes involving the inimitable Anse Bundren in Faulkner’s As I Lay Dying are blackly comic masterpieces.

If you were to write a historical novel which event or figure would be your subject?

The Confederation of Kilkenny.

What sentence or passage or book are you proudest of?

Very hard to say. Here’s a short extract from my second novel, The Judas Kiss:

“A cat, a white snowdrift, had been slinking across the tiles. With a lithe ripple it was on his lap. ‘Go on, Cleopatra. Shoo!’ The pard pattered past on silent pads.”

What is the most moving book or passage you have read?

I don’t, but if I ever do, Grimms’ Fairy Tales (the new translation of the first edition).