Daring to dabble with Daniel Deronda

Distinguished biographer Diana Souhami has vexed some critics by writing a novel based on George Eliot’s Gwendolen Harleth. Here she defends the merits and freedom of the ‘Chutzpah Press’ 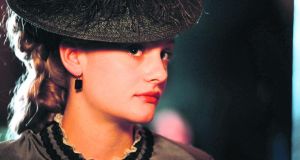 Romola Garai as Gwendolen Harleth in a 2002 BBC TV production of Daniel Deronda, based on the novel by George Eliot. Diana Souhami’s Gwendolen: A Novel takes up her tale. Photograph: BBC

Gwendolen Harleth, at the start of George Eliot’s Daniel Deronda, is beautiful, confident, ambitious and witty. She is also narcissistic and impulsive. By the novel’s end she has endured marriage to a sadist, rejection by Deronda, the only man she ever loved, and the loss of hope of fame or fortune. Widowed, and in a fragile mental state, she goes home to mother, to their rented house in a Wessex village where minds are small and prejudice large. Worse, she is guilt-riven, afflicted with shame, for when her evil husband, whom from the off she wished dead, fell into the sea off his boat she resisted saving him. “The rope, the rope,” he called to her as he sank, but she did not throw it.

It is hard to close the book and not wonder what on earth she will do next. In Gwendolen I fantasise what this might be. I do so as a reader of a great work where a fictional character is already vividly alive. I play with the relationship between reader, author and a character in a book and with the indistinction between a real and an imagined person.

I write, 138 years on, privileged by entitlement denied to a woman like Gwendolen in George Eliot’s day: the right to speak out about sexual abuse, to leave a terrible marriage, to be educated, work in the professions, vote, earn money. “Marriage is the only true and satisfactory sphere of a woman,” Gwendolen’s uncle, the Rector, tells her. No matter that she craves her own life and is averse to even the most casual physical contact with men.

I try to help her understand why Deronda rejected her. I excise, in the tradition of FR Leavis, most of Deronda’s lengthy quest for a Jewish identity and homeland. Gwendolen, in Daniel Deronda, knows nothing of his intentions and cannot confide her problems. I let her go to London and meet people not stifled by sexual and social prejudice: an American transvestite trapeze artist, a gay painter. I let her fly high in a hot air balloon and slough off the misery of her past.

In “real” life George Eliot’s best friend was the feminist Barbara Bodichon, founder of Girton College for women. In my novel, Barbara Bodichon becomes Gwendolen’s friend too. She encourages her to take risks, travel and to dare to be herself.

George Eliot with her partner George Lewis held afternoon salons. I arrange for Gwendolen to attend these too. She is discombobulated and mystified that George Eliot knows so much about her – even what is in her mind – and views her as a clairvoyant who must know her future too. My point is how blurred our sense can be of who is real and who is imagined.

Before Gwendolen was in the shops a faculty of academics tweeted their pique at my temerity at so messing with greatness: “Is book from the Chutzpah Press?” “Now I know that this exists I guess I have to review it.” “Provoked”, “litfic”, “fanfic”, “couldn’t be any worse than it sounds”.

Last night at the Barbican I saw a production by Third World Bunfight of Macbeth: it was Verdi’s operatic version of Shakespeare’s play, cut to 100 minutes, rewritten, reorchestrated and transported to the war-torn Congo. Nobulumko Mngxekeza was a stunning Lady Macbeth. In Shakespeare’s day her part went to a white man. Neither Shakespeare, Verdi nor George Eliot are one scrap diminished, chipped at or tarnished by twenty-first-century offerings from the Chutzpah Press. Far from it. Their genius keeps us busy.

Gwendolen: A Novel by Diana Souhami is published by Quercus, £16.99. Souhami is the author of Coconut Chaos, Selkirk’s Island (winner of the Whitbread Biography award), The Trials of Radclyffe Hall (shortlisted for the James Tait Black Prize for Biography and winner of the US Lambda Literary Award), the bestselling Mrs Keppel and Her Daughter (also winner of the Lambda Literary Award and a New York Times ‘Notable Book of the Year’) as well as the critically praised Edith Cavell and Murder at Wrotham Hill.