Dante, Oughtmama and the Bee Gees

Frank Golden explains the inspiration for his new poetry collection, ‘gotta get a message to you’ 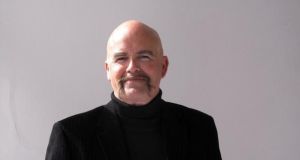 Frank Golden: I have persisted longer physically than I ever thought I would as a 14- or 15-year-old

When I was 14 I was infatuated with the idea of the poet as maudit – that we must suffer determinedly to forge or disclose the deepest truths – as Anthony Cronin noted in his sideways glance to Baudelaire via Mangan.

When I think back to that early work it was narrative I was intrigued by in those long poems I spent my summers writing and refining, and it is narrative which has remained a constant over the years. Those early long poems were modelled on Keats’s Endymion, or Byron’s Don Juan. They were, of course, pathetic in the sense of being marked by melancholy.

I was stereotypically in a state of juvenile, neurasthenic enthral “to easeful death”. I didn’t necessarily want, or expect, to live. That poets like pop stars would show their gold early like Rimbaud, or Morrison, and then extinguish ruggedly in a drug haze in some desert or other, was part of a simple-minded, but defining mythos I bought into.

This desire to explore narrative in poetry led me to write The JJ Sequence (Part 1 of The Interior Act/Salmon Poetry). These were the first-person poems of a child abuser. The final section of that book was called The Xavier Poems and were the utterances of an alter self. The book of poems following on from The Interior Act was In Daily Accord (Salmon Poetry), which was the culmination of a daily writing project conducted over 15 months. The 1,500 poems, which were haikus and senryus, were edited down to 500 or so. Inevitably there were characters who moved into and out of focus over the course of that period, and narrative lines meshed to create a story arc of sorts.

gotta get a message to you continues to explore narrative sequences, but this time using, in part, the co-ordinates of visual art. The title of the book comes from a large drawing by Timothy Emlyn Jones titled I gotta get a message to you depicting crumpled pages, and that title in turn comes from the Bee Gees’ 1968 hit of the same name. The sense of urgency in the title seemed appropriate for the book as a whole.

The works of art which have provided the platform for the elaboration of narratives, many of which are reproduced in the book, are by old friends and colleagues, such as Hazel Walker, Liadin Cooke, Tom Molloy, Maria Kerin, Tim Jones, and Aine Phillips. Artists like poets tend to look at the world slant.

There is that combination of a registered and observed world vibrating with a metaphorical or symbolic encoding of it. The kinds of elliptical narratives explored in the first three sections of the book have to do with characters in states of crisis, implosion, transition.

The third section of the book is called the humour of animals and takes as its epigraph a quotation from one of the tangos in Anne Carson’s The beauty of the Husband “husband and wife rested/as palyers may rest against the rules of the game/if it is a game, if they know the rules”. There is also a poem on Zinedine Zidane called Zizou’s Reflections on Reality, which is a response to the video work of Phillipe Parreno and Douglas Gordon. Seventeen cameras were trained on Zidane for the duration of a match, while the interval allowed Zidane to voice his philosophical reflections.

The third section of the book is realities, which looks at the body’s decline, and specifically at my mother’s debility due to Parkinson’s. A movement in water is a collection of more occasional poems, some of which focus on areas of the world I have spent bits of time in, namely Israel/Palestine and Cambodia. The final section is called oughtmama and is a series of meditations on the area where I have chosen to live in north Clare.

I love the object status of the book and it is important to me that gotta get a message to you is a beautiful book, aside from dovetailing nicely with an earlier collection, On route to Leameneh (Raven Arts Press) , for which the great Irish painter, Paddy Graham, did a set of extraordinary illustrations.

Clearly, I have persisted longer physically than I ever thought I would as a 14- or 15-year-old. I didn’t die drug addled in an Eastern desert. I have survived long enough to enjoy the daily traipse up Abbey Hill and the Witch’s Bite here in Oughtmama, with our hound, Dante, bounding energetically towards the highest elevations.