Olivia Laing has written a reality-mashup for the modern misanthropist 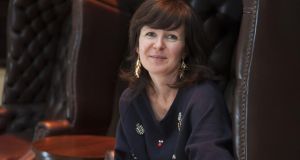 In the hyper-reality of neo-digital selves, we cannot keep up or shut up. And so it is for the split-narrative persona of Kathy/I in Olivia Laing’s debut novel Crudo. The reader becomes frenziedly acquainted with a woman who is both self-determining and someone else entirely. Who am I? Who is the “narrative I”? And does it even matter? Well, no, frankly, it doesn’t. So much explodes from the first few sentences it’s hard to care (or not care) who’s telling the story and why. You’re in it now, boarding, I’m in it now, nowhere to hide. The protagonist’s distress at the absurdity of the world via social media is the lodestar to the narrative and it’s horrible and hilarious, crazed and enslaving.

Kathy (yes yes Acker), “by which I mean I”, is away in Italy choosing her breakfast carefully and trolling online. She is almost on her third marriage and doesn’t like herself very much. “Dried out . . . as cool and brown and flat as a piece of discarded toast, not appetising exactly, not desirable, but fodder for someone, a pigeon at least.” She is also wise, smart and honeycombed with humour. “She was forty, she had a small diamond on her right hand, she was looking at a mountain, no one was currently in her way.” Rising rents, rising waters in Miami, Tampa and Naples, a liveblogged rape, fire and fascism, fuse with the unexceptional guff like dropping abuse on an Instagram post, gazing about at a bar mitzvah or dealing with a husband who loves lizards and is addicted to tumble dryers.

Laing, as we know from previous books To the River, The Trip to Echo Spring and The Lonely City, is a virtuoso in not precisely inhabiting other writers’ and artists’ lives (Virginia Woolf, six drinking men including Hemingway and Cheever, Warhol, David Wojnarowicz), but repurposing mood and experience, turning it topsy-turvy to model some brilliantly original text. Why she (Olivia) chose to inhabit Kathy is irrelevant, though as we now know Acker was not averse to lying, a once-living example of an unreliable narrator. She began writing by pinching pieces of other people’s texts, as Chris Kraus wrote about in After Kathy Acker: A Biography. In Crudo, Olivia anchors to Acker and her myth of narcissistic actualisation, “Kathy was always lying. She’d lied since she was a small child with unattractive red hair. When her hair began to fall out because of the stress of living with her mother she told the girls at school that it had been eaten by a rabbit.” A Kathy with white hair in her bangs who was more interested in nuclear war than nuclear families. Kathy mapping her dreams of “swamps, alleys, dead roads, dead leaves, spit and shit”. It’s a fun device that enables Olivia/I to dislocate from the ruse cyclically and slink off into her own Twitter-gonzo memoir.

The novel is set in the summer of 2017, various events such as Grenfell explicitly let you know this: “How many people died, eighty, eighty-five. Fire so hot you don’t get bodies.” There is of course Trump, pro-Nazi marches with people shouting “Fuck You Faggots”, melting ice-caps, the Kardashians, tensions in North Korea, Sinéad O’Connor having a rough time on YouTube, all the gone-viral snippets that force their way into daily life. But there is also the narrator’s own a la carte experience: reading an essay in the London Review of Books about young men escaping Mosul, a priest in Rome using the term “WhatsApp” in his sermon, a russet-coloured Labrador called Rufus, Tampax, pretzels, making it more entertaining. It is a working puzzle to figure out what is real and what only alludes to be. If you’re not too petrified to see the world as it really is, you will love this book. The bounce-back between online and offline, between history and accelerated present, highlights the loss of commonplace privacy or the notion of workable autonomy. She thinks back to 1987: “what did people know, what were they ignorant of?”

The pacing is quick and slick – when it speeds up to the point of breathlessness, the Orthus-type, two-headed narrator slows it right down again for a break, reintroducing the ordinary: “Breakfast. Three triangles of watermelon, one cup of coffee, one pot of yoghurt, one small jar of honey. That’s how it went.” In there with the dexterousness and sagacity of the sentences are warmth and love, humour and kindness. ‘Sometimes she’d catch him at home doing a complicated task, maybe baking bread or making a sauce, and speaking to himself in a low confiding tone . . . if this was love she’d take it, lying next to him naked, both fiddling with their phones.”

Crudo is too sane and searing to be written off as purely “experimental”. It reads as a reality-mashup, a manifesto for the modern misanthropist; here’s how to consent to the craziness out there, to be happily destabilised without the burden of worrying too much. We’re not in control, and neither is the cyber soot in autoelectronic spin. Love is the world, pain is the world. Nothing else stains or sticks. Get on with it.