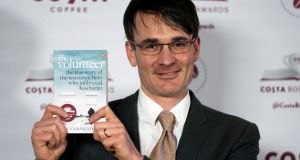 Costa Book of the Year winner Jack Fairweather with his book The Volunteer at the Costa Book Awards in London, Britain. Photograph: Will Oliver/EPA

The Volunteer by Jack Fairweather has been named the 2019 Costa Book of the Year.

The news was announced on Tuesday evening at the Costa Book Awards ceremony held at Quaglino’s in central London, England.

The book is a landmark account of an unsung hero of the second World War, Polish underground operative Witold Pilecki, who infiltrated Auschwitz.

Sian Williams, chair of the judging panel, said: “The judges were unanimous in choosing The Volunteer by Jack Fairweather. It’s an incredible story; pacy like a thriller, it reads like fiction and yet it’s not, it is fact. It is a story none of us have read before – this is an extraordinary and important book that people need to read.”

The Volunteer beat Middle England, by novelist Jonathan Coe; The Confessions of Frannie Langton, by debut author and former lawyer Sara Collins; Flèche, the debut collection from Hong-Kong-born poet and lecturer Mary Jean Chan, and Asha & the Spirit Bird by children’s writer Jasbinder Bilan to win the overall prize of £30,000 (about €35,400) at the ceremony.

The Costa Book Awards are the only major UK book awards open solely to authors resident in Britain and Ireland.

Also announced at the ceremony on Tuesday evening was the winner of the Costa Short Story Award. Anna Dempsey, a writer and teacher, won the public vote for the prize and £3,500 for her story The Dedicated Dancers of The Greater Oaks Retirement Community.

The 2018 Costa Book of the Year was The Cut Out Girl by Prof Bart van Es of the University of Oxford. Like The Volunteer, its subject is the Holocaust.