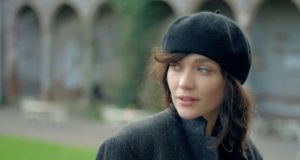 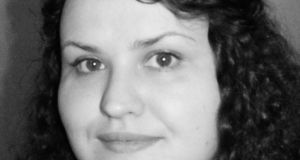 Author Deirdre Sullivan and illustrator Karen Vaughan have won the 28th Children’s Books Ireland Book of the Year Award with Tangleweed and Brine at a ceremony in Smock Alley Theatre, Dublin today.

The award judges said: “This remarkable book is a significant and timely contribution to Irish young-adult literature and feminist literature for young people. Deirdre Sullivan’s simultaneously rich, delicate and stark text is powerfully enhanced by Karen Vaughan’s haunting black and white illustrations. Combining the timeless allure of dark fantasy with subversive explorations of female embodiment and systems of women’s suffering and triumphs, this incisive, exquisite collection promises an enthralling and unsettling experience.”

During the ceremony students from King’s Hospital presented Laureate na nÓg Sarah Crossan with the Children’s Choice Award for Moonrise. Voted for by young readers from across the country, this award winner is chosen by shadowing groups who read and judged the 10 shortlisted titles and voted for their favourite. This year the shadowing scheme was kindly supported by the Arts Council of Northern Ireland and Unesco Dublin City of Literature.

The CBI Book of the Year Awards judging panel also made awards to the following:

Honour Award for Fiction: Sheena Wilkinson for Star by Star. The judges said: “It’s 1918, the Great War is coming to an agonising close, women are on the verge of being able to vote, and the determined and vulnerable Stella resolves to change the world. This assured and bold tale of heroism, courage, and survival skilfully draws the modern reader into its vividly rendered early-twentieth-century setting. Sheena Wilkinson offers an inspiring, humorous and insightful proclamation of each individual’s potential to enact change and create a more just society, vote by vote and star by star.”

Honour Award for Illustration: Kevin Waldron for Chocolate Cake. The judges said: “Kevin Waldron’s lively illustrations adroitly capture the exploits of Michael, a little boy with a big appetite for chocolate cake. In this witty tale of a midnight feast that goes wrong, Waldron’s good-enough-to-eat illustrations, quirky design and clever use of page turns enhance the author’s child-centred approach, appealing use of language, anarchic sensibility, and energetically onomatopoeic account of the allure of the forbidden.”

Judges’ Special Award: Eoin Colfer for Illegal. The judges said: “This timely and powerful graphic novel charts a young boy’s journey across the Sahara Desert on the long, dangerous trek towards Italy and the potential for a new life there and reunion with his sister. This affecting book weaves together real stories of migration with immersive, naturalistic illustrations and carefully paced, minimalistic text. Combining intensity with accessibility, this is an important book that will stimulate important conversations and reflection about human rights, inclusion, solidarity, and prejudice.”

Eilís Dillon Award for a first children’s book: Meg Grehan for The Space Between. The judges said: “Meg Grehan’s debut novel offers an honest and tender chronicle of new love between two young women and explores the complexities of sustaining mental health in contemporary society. The story ebbs and flows and is enhanced by intriguing layout of text which expresses the tumult of the protagonist’s life and experiences. Skilfully rendered in verse and elegantly written and presented, Grehan’s narrative is a significant new addition to Irish children’s literature.”

The CBI Book of the Year Awards are the leading children’s book awards in Ireland. They are a celebration of excellence in children’s literature and illustration and are open to books written in English or Irish by authors and illustrators born or resident in Ireland. Previous winners include Sarah Crossan for One,; John Boyne for The Boy in the Striped Pyjamas; Sheena Wilkinson for Grounded; Marie-Louise Fitzpatrick for There and Hagwitch; and Oliver Jeffers for Once upon an Alphabet.

Dr Patricia Kennon, chair of the judging panel, said: “Bringing together exciting new voices in illustration and writing as well as beloved and well-known authors, the 2018 Book of the Year Awards showcases the best in Irish literature for young people. Exploring and discussing the best of Irish children’s literature has been very rewarding and enjoyable, both professionally and personally. The jury panel inclusively draws together a wealth of expertise across different sectors in the children’s literature arena including booksellers, teachers, students, academics, authors, illustrators, teachers, and Irish-language specialists. This wide range of knowledge is a crucial aspect of the awards and I would like to thank the judges for their rigour, dedication, and respect for young readers.”

Jenny Murray, acting director of CBI, said: “It is with great pride that we celebrate the CBI Book of the Year Award winners today. These awards, in their 28th year, have a long-established history of showcasing the very best of what Irish authors, illustrators and publishers have to offer to the children and young readers in Ireland and further afield.”