Channelling what writing about nature, and living in it, means to us 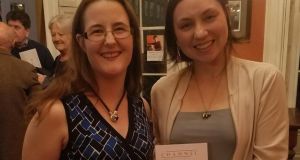 On the day of 2019’s first international climate strike in March, we sat down to brunch. We hadn’t seen each other in a while and, with catching up, it wasn’t until halfway through our avocado toasts that we mentioned the crisis. The irony wasn’t lost on us.

Tucked away in a vegan cafe in Dublin’s city centre, the words “climate crisis”, once spoken, sat between us like a mouse in a trap – something we’d rather not look at, a kind of hopeless, already finished act, and one which we had the distance not to feel entirely responsible for. Instead of turning away as, we admit, we’ve each done before, we began to talk. We talked about how disconnected we felt from the reality of the crisis. Aside from unseasonable weather and some changes we’d made in our lifestyles, neither of us had really felt the impacts of environmental degradation.

What’s more, the disconnect we felt didn’t just relate to climate change, it extended to the natural world in general. As writers whose work often features imagery and metaphor based in nature we realised, while we might use the land as a poetic device, we could scarcely tell you more about it than the nature of the crisis it’s in.

Coming away from this conversation, we decided to make something. Imagining engagement with a political issue usually calls to mind images of lobbying, public demonstration and civil disobedience, but what contributions might be missing, then, from the introverted doers, the ones whose abilities may be best accessed in a quiet space rather than before a crowd?

In our histories with activism, we’d often felt there was more we could contribute than we had yet done through these traditional activist tactics, so we considered our particular strengths – creativity, a love of language and storytelling, a profound concern for the natural world – and decided to start Channel. In all uses of the word, a “channel” exists to direct something – an idea, a material, a spirit – through or towards something else. In nature, it may be a length of water that joins two seas or a navigable passage in waters otherwise unsafe for sailors. In electronics, a band of frequencies used for transmission. Channel, too, is intended as a passage, one which connects people to narratives, ideas and sentiments surrounding the natural world.

The idea that art and narrative can act as passages for political thought is nothing new. In Ireland, the work of street artists like Joe Caslin and Will St Leger bolstered the campaign for marriage equality. The Repeal campaign, too, was alive with storytelling, with countless personal narratives such as those of the In Her Shoes project shared and reclaimed.

For many readers the idea of nature writing may fall outside of political art, calling to mind an apolitical aesthetic tradition dedicated only to describing beauty. In our own lives, though, we’ve found that by engaging with the environment on the page we’ve formed emotional relationships with our own natures and with the natural world that drive our environmental activism.

Eco-journals with political intent exist internationally, with the likes of Orion Magazine in the US and Elementum in the UK. We’ve taken inspiration from these, as well as from the recently concluded EarthLines Magazine, operated by Sharon Blackie and David Knowles in Ireland until 2017.

By focusing on nature as subject matter and source of inspiration, these journals assert the value of such a source. Their existence implies that writing and reading about the natural world is worth doing, whether because nature can inspire great work or because doing so fosters worthwhile relationships with the world around us. In the present climate and biodiversity crisis, we believe embarking on such a publishing project is inherently political.

Channel invites writers and readers to explore what writing about nature, and living in it, means to us. Nature writing as a genre has been endlessly redefined, and not every piece we publish fits any traditional definition. Some deal directly with climate breakdown, illustrating the crisis in a call to arms. Some revel in imagery drawn from nature, and can be seen as a call to arms of a different sort. Others simply play with the formative impact of nature on human language and imagination. In English, an asset we can be sure of is a bird in the hand; depression is the black dog; a person trapped is a caged bird. In turn, we give names to natural objects which transform them into expressive symbols in our lives: Baby’s Breath, Lady’s Mantle, Granny’s Bonnet. Channel offers a platform for work which celebrates this reciprocity, giving expression to connections with the natural world which, in the current crisis, we stand to lose.

Sent to print on the day of the second international climate strikes and launched at the Irish Writers Centre on October 22nd, Channel Issue 1 is the product of over 500 international submissions of poetry and prose. In it you’ll find poems which offer everything from notes on how to use dandelions to make someone piss themselves to moments of tenderness in the bath with Bruce Dawe and complex experiences in grief, loss and acceptance.

In addition to poetry, Issue 1 features four short stories (including one with an exploding whale) and a personal essay mapping one woman’s journey towards community and activism through Extinction Rebellion. We are exceedingly proud to have had the opportunity to publish each of our Issue 1 contributors, to have worked with Cork-based artist Rachel Doolin on our Issue 1 cover and to have found ourselves surrounded by such an active, diverse international community united by concern for the natural world.

In 2020, we look forward to the spring launch of our second issue as well as continued community-building efforts. To get in touch, find out how to submit your work for Issue 2, or order your copy of Issue 1, please visit our website at channelmag.org