Can a man write a feminist novel? 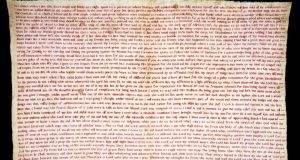 Elizabeth Parker’s embroidery, now held by the Victoria and Albert Museum in London

Some time about 1830, near Ashburnham in Sussex, a young woman named Elizabeth Parker began work on an unusual piece of embroidery. Now held by the Victoria and Albert Museum in London, it is described in its catalogue entry as a ‘sampler’, but perhaps only because no one can think of a better word. As samplers go, certainly, it is far from typical. They were made at that time as exercises by schoolchildren, or by young women of middling station in their hours of leisure. Often incorporating lines of pious verse, they were primly decorative objects, to be hung above hearths or on parlour walls as evidence of domestic accomplishments. They were meant to exemplify – and to inculcate – what were then the requisite feminine virtues: industry and perseverance; modesty and self-sacrifice.

Parker’s sampler, to put it mildly, is not like that.

It is a broad swatch of linen, embroidered in cross-stitch with red silk, but without ornamentation of any kind. The stitches form a closely spaced text that take up almost its entire surface before breaking off, seemingly unfinished. This text, which runs to almost 1,700 words, is not in verse or teeming with pretty sentiments. It is a wandering but urgent personal testimony, and it does not make for easy reading. At 13 Parker left home and went into domestic service. Against her parents’ advice, she left her first position and entered the household of a ‘Lieut G’, who proved to be a cruel and lecherous employer. Once, when she resisted his advances, he threw her down the stairs. She was then fifteen years old.

Writers are often impatient with the question of where their ideas come from, perhaps in part because not all writing has its origins in distinct ideas. For me, at least, a novel begins not with an idea but with a constellation of images and sensations – an aesthetic, if you want to be grandiose about it – and with an impulse to somehow realise these inward glimpses in a way that others can apprehend. So much for the fancy part. Elizabeth Parker’s sampler didn’t inspire my novel in any straightforward way; in fact, much as it came to preoccupy me, I knew her story wasn’t mine to tell. But her words stayed with me – persisted in me - in a way that began to seem inescapable. I knew that they would leave a mark on whatever I did next, even if it was visible to no one else.

I became obsessed, in particular, with her first words. ‘As I cannot write,’ she begins, before laboriously stitching line after line of carefully formed characters into her scrap of linen. To those of us who ‘write’ on immaculate and almost noiseless keyboards, our fingertips cosseted almost to the point of effortlessness, the sustained labour of embroidery is almost unimaginably arduous. Parker would have worked by poor light, since her days were not her own. Her eyes would have suffered. Her back would almost certainly have ached. Her fingers may have bled. The work she was doing is not merely equal to anything we now think of as ‘writing’; it vastly surpasses it. And yet Parker believed writing to be beyond her, to be above her.

That thought alone would be moving, but the account she gives is almost unconfrontable in the nakedness of the suffering it depicts. What makes it singular, though, is not the cruelty that others inflicted on her – that men inflicted on her - but the relentlessness with which she tormented herself. Parker could not have imagined the #MeToo movement (and let’s not kid ourselves – until recently, neither could we), but that is only to begin to understand just how remote from ours her experience was. She was devout in a way that would have been unremarkable in that time and place, but also pious in a way that we may now find difficult to grasp. Her urge was not to denounce those who had abused her, but to scour her conscience for failures of her own, convinced that somehow the original fault must lie with her. When her misery and trauma led her to the brink of suicide, she castigated only herself. Her very thoughts, she believed, were sinful.

All of this makes for grim reading, and yet we never quite despair of Elizabeth Parker. For every dark allusion in her testimony to wickedness or affliction, there is an invocation of its opposite: of innocence, virtue or even happiness. In fact, for all its obsessive rehearsals of shame and despair, it reveals a countervailing current of vindication that seems to persist in spite of Parker’s own best efforts. She meant to kneel, to make an act of confession, but could not keep herself in the end from mounting her own defence, from taking a stand.

That brings me to her last words, which came to preoccupy me even more deeply - and which became the opening epigraph to the novel I eventually wrote: ‘what will become of my soul’.

There isn’t a question mark (the text of Parker’s sampler is unpunctuated), but it’s not clear that she intended to form a question in any case. Perhaps she had glimpsed some redeeming prospect, but left the thought unfinished. Perhaps she saw it in her own words, as she stitched the last of them into her linen almost two centuries ago, and left them for us to find. Perhaps this is what became of her soul.

I’ve said that I didn’t attempt to write Parker’s story, but the one I did write – The House on Vesper Sands – is haunted by her ghost, among others. It is a story of indomitable bluestockings and accidental policemen, of lovelorn orphans and black-hearted aristocrats. It is an entertainment, and unashamedly so, but I hope it is more than that. It is a story of the wickedness of men – one of the few notions it takes quite seriously – and of the harm they do to women. It opens with the suicide of a seamstress named Esther Tull, who has resolved not only to make a decisive sacrifice, but to leave behind – in a message sewn into her skin – a small but fateful testimony of her own. From the outset, it is a story in which women – even the dead and their ghosts - will not accept their fates, will not lie down and be still.

Can a man a write a feminist novel? And can a man be a feminist, for that matter? Accepting the principles of feminism is a matter of simple justice. Doing so should be universal and unremarkable, among men and women alike. Still, no matter what a man believes, it’s my view that he has no business calling himself a feminist, since to do so is to claim for himself a lived experience he has never known and a struggle in which he has had no part.

In the same way, a man cannot claim to have written a feminist novel, but that’s not to say that he can’t make himself useful. He can start with the acts of empathy which are not merely essential to any serious fiction but constitute his most fundamental human duty.

He can ask himself: What might have become of her soul? Because otherwise – if he can’t do that much – what will become of his?

Paraic O’Donnell is the author of The House on Vesper Sands, published by Weidenfeld & Nicolson