In Extremis: The Life of War Correspondent Marie Colvin 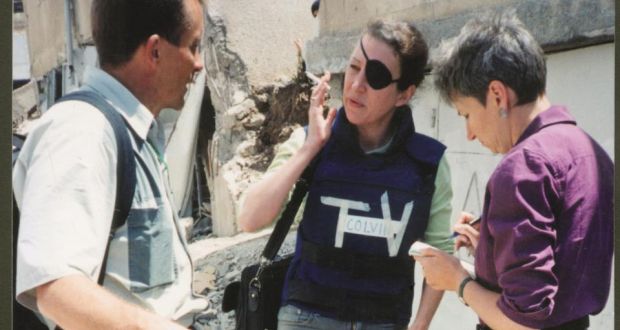 Marie Colvin and Lindsey Hilsum (right): Hilsum’s understanding of the background to conflict and life as a correspondent in the field is one of the great strengths of the book.

After war correspondent Marie Colvin was shot in the eye in Sri Lanka, she wrote, “It has always seemed to me that what I write about is humanity in extremis, pushed to the unendurable, and that it is really important to tell people what really happens in wars.”

That was her manifesto, and one the Sunday Times correspondent was still pursuing, wearing her trademark black eye-patch, when she was killed in a rocket attack by Syrian forces in 2012. Lindsey Hilsum, who has written In Extremis, had eaten dinner with Colvin in Beirut just days before, and decided it was too dangerous to go in. She admits that she wondered, uncomfortably, if Colvin was reckless, or she, Hilsum, a coward.

Hilsum, Channel 4’s international editor, has always had buckets of empathy. Here she marshals not just empathy for her subject, who was also a friend, but investigative and critical skills and damn fine storytelling.

Colvin’s journals reveal an early independent and rebellious streak. At 13, this American-Irish Catholic wrote that she wore a mini to Mass. “The mother and the father no like.” She missed the deadline for Yale, but talked her way in, a skill she never lost. She wangled a job in journalism and eventually got to Paris with the wire service UPI. She was away, and soaring. After securing an interview with Gadafy, which went global, she switched to the Sunday Times.

An early piece from a Palestinian camp under siege in Beirut, when she bribed an Amal commander to stop sniping so she could cross, and did not tell her editor, was classic Colvin; first-person storytelling, noticing the small details, spending time with those directly affected. Describing a woman shot dead trying to buy food, she wrote, “Someone opened her fist and cleaned out the handful of blood-soaked dirt she had clenched in her pain.”

Hilsum’s reconstruction, a layered account of how Colvin got the story, and its impact on her as well as others involved, is the model for the rest of the book. Colvin’s 300 journals, her articles and Hilsum’s interviews with friends, family and other witnesses draw us into the drama, and inside her head. Hilsum’s understanding of the background to each conflict, and the reality of life as a correspondent in the field, is one of the great strengths of the book.

Living under fire in Kosovo, crossing snow-covered mountains in Chechnya and hunkering down in Baghdad, Marie Colvin became known for a very personal style of reporting that focused on victims, and her courage and persistence was legendary. As Hilsum writes, she went further and stayed longer than anyone else. Along with two other women journalists, she refused to leave hundreds of refugees behind in a besieged UN compound in East Timor when others fled. The Indonesians finally allowed everyone safe passage.

After she was shot, she suffered from nightmares and drank more and more.

In chronicling this unravelling, the book does a wider service, portraying the price paid by many war correspondents, including Colvin, in alcoholism, PTSD and broken relationships. While her friendships lasted all her life, her love life, the second storyline here, was often chaotic and heartbreaking.

Hilsum doesn’t hold back on the subject of the Sunday Times, and its branding of Colvin as a risk-taking adventurer, even as she was being treated after the attack in Sri Lanka. “Marie and her editors had invented a myth for her, an identity they promoted even when she was gravely injured.’’

After the Iraq war and with the rise of the internet, journalism became more dangerous. Being a journalist was no longer a protection. Instead it was more likely to make you a target, particularly if you were as high-profile as Colvin.

Hilsum’s account of Colvin’s last days under shelling in the Bab Amr media centre exposes how an informer was tracking the journalists and conveying the information to the Syrian regime. For the reader it is like being inside one of Colvin’s post-Sri Lankan nightmares; knowing the ending, but reading and rereading in the hope it will be different this time.

She might have died many times over, in Lebanon, Kosovo or East Timor, places where her reporting had huge impact and perhaps helped to save lives. It is a bitter irony that she died in Homs, in a conflict that still goes on, and one from which the world has largely averted its eyes.

Hilsum never overtly answers the question she pondered at the start; was Colvin reckless to go into Homs, particularly a second time? By any standard of risk assessment, by any editor in the world, she was. But Colvin was always an outlier, and after decades of war reporting, her personal danger index was set to a different scale.

In the end, she did it for all of us, for humanity itself. She was never cynical about the role of journalism, and believed to the end that reporters can make a difference. In the world we live in now, that is sometimes difficult to believe. But thanks to her, we cannot say we do not know about the horror of war, and what it does to all of those who endure it, civilians, combatants, and those who bear witness.

In Extremis rescues Marie Colvin from the rubble of Bab Amr, and brings her tragically, and tenderly, to life. Tamils, Timorese and Syrians mourned her loss. She had stood with them, and by them, when few others did.

Margaret Ward is a freelance journalist and former foreign editor with RTÉ who has reported on conflicts in the Balkans, Rwanda, Sudan, Afghanistan and Libya