I Heard God Laughing by Hafiz: ought to be prescribed by doctors 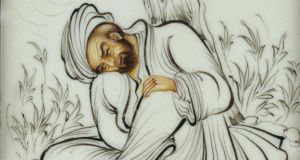 Reading Hafiz is like taking a deep breath of clean, crisp air

I was introduced to the poetry of Hafiz by an acquaintance in New York, a Buddhist property developer who lived above me. It was winter, bitterly cold, and I came home one afternoon, red-nosed and miserable, to find a copy of I Hear God Laughing on the landing outside my door. I spent the next two days in a swoon of reading, moving only to eat, sleep and fulfil bodily functions. I underlined, wrote out quotes, laughed, cried. But they were happy tears. Relieved tears. Reading Hafiz was like taking a deep breath of clean, crisp air, after months of coughing smoke.

Sometimes I pray, but more to soothe my own soul, than due to a belief in any spiritually blue-toothed message to an omniscient recipient. Having said that, the arrival of this poetry into my life at that particular moment did make me wonder, however briefly, if someone, somewhere, might be listening (or perhaps I should just remember that, whatever the circumstances, there’s always a chance of unexpected kindness, especially from a neighbouring Buddhist).

The poems in this collection are subtitled Poems of Hope and Joy. Hafiz, who lived circa 1320-1389, was, according to Daniel Ladinksy’s introduction, “the most beloved poet of the Persians”. Goethe adored him, as did Ralph Waldo Emerson. He was admired by Nietzsche, Lorca, Brahms, and Queen Victoria. He’s even quoted by Sherlock Holmes. Yet, as far as I can tell, he’s not that widely read. It seems as though Rumi took the prize for “seriously old poet ideal for quoting on social media” and everyone forgot Hafiz. Maybe I’m wrong. Maybe he’s ubiquitous, taught in schools and universities. But if not, he ought to be. No, actually, he ought to be prescribed by doctors. Poems from I Heard God Laughing should replace national anthems. But don’t take my word for it. Take this:

Come in, my dear,

From that harsh world

That has rained elements of stone

Upon your tender face.

Should receive a toast from us