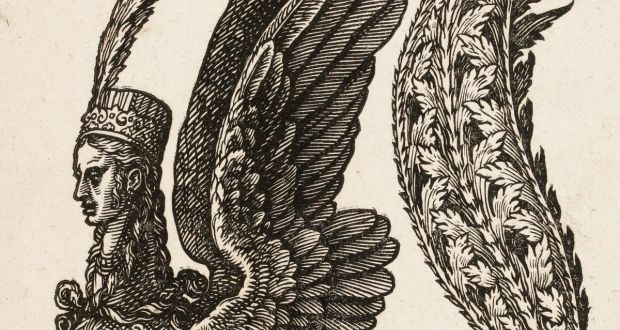 The harpy, a woodcut print by Melchior Lorch, 1582. Copyright the trustees of the British Museum

“Heav’n has no Rage, like Love to Hatred turn’d, Nor Hell a Fury, like a Woman scorn’d.” goes a line by William Congreve.

Megan Hunter’s follow-up to her beguilingly laconic debut, The End We Start From, is a graphic embodiment of this quotation. The protagonist, Lucy, is long fascinated with harpies, even making them the subject of her abandoned PhD. Half woman and half bird, harpies figure large in classical Greek mythology. Some texts, such as Dante’s Divina Commedia, depict them as entities that tortured the sinners in the seventh ring of Hell; others, such as Homer’s Odyssey, personify them as storm winds.

These violent bird monsters snatch away evildoers. The evil in this book is Jake’s infidelity, and the one exacting retribution like a harpy is Lucy, his devoted wife. She is a freelance writer whose routine involves shepherding her two boys to and from school, arranging their elaborate birthday parties and managing the family’s meticulously curated social calendar.

At the parties she frequents with Jake, Lucy socialises with other women her age and describes their life with sly irony. They stream TV to vicariously lead eventful lives, talk with misty-eyed reverence about the time their children were toddlers, and have careers that are either on hold or relegated to a “part-time, lower-waged track”. They are in a temporary state of gentle stasis that will soon be disturbed by “the trickle of divorces that would begin just as our children became teenagers”. These women are living in “parentworld”, where nothing happens.

Soon, something does happen. The rug is pulled from underneath Lucy when she receives a call from a man who tells her that Jake is having an affair with his wife, who happens to be Jake’s older colleague.

Lucy deals with this devastating piece of information with finely tuned aggression. She does not gorge on the knowledge and then spew it up to her husband. Instead, she sits with it, chews on it and eventually digests it, letting it become a part of every fibre of her being. It is almost as if addressing the betrayal prematurely will rob her of its magnitude.

The prose is brilliantly cinematic, gauging the escalating emotional intensity of Lucy’s anger with taut language. Her acute self-awareness of her behaviour after the cataclysmic phone call is unnerving. She muses how women depicted on screen would give histrionic reactions to this news: “I could fling myself at him, pummel his chests with my fists, demand that he tell me everything.” Similarly, when deciding how to confront Jake, she is conscious of not doing it in a way that feels scripted or cheesy.

What is most arresting about the narrative is how it charts the metamorphosis that takes place inside Lucy, both psychologically and physically, as she begins to recognise the emotional reverberations of the betrayal. The change is incremental. This first time she gets an inkling of her suppressed fury is when she feels a tightening at the mere sight of her husband eating the food tenderised and prepared by her.

As with her debut, Hunter writes about the intricacies of motherhood with striking nuance. The rhythms of domestic life are crisply captured in her prose. When Lucy picks up her children from school, collecting wrappers from their treats, she is “absorbing shreds from their days”. Lucy recognises her older son developing a new internal quiet, signalling formation of a self, a “whole world I would never know about”.

While her debut likened new motherhood to a visceral emotion, in this novel the motherly sentiment is more placid. Marriage and motherhood are compared to death, since “no one comes back unchanged”. Lucy, while observing a woman crossing a street with her children, notes how she “put her body in front, before theirs, the first thing that would be hit”.

Lucy and Jake decide on an arrangement for reconciliation – Lucy will hurt Jake three times. Each punishment grows more vicious as Lucy becomes less remorseful. The harpy seems to be taking over her sanity as the narration grows more delirious and fragmented. A minor quibble is the vague, inconclusive ending reminiscent of Birdman’s climax.

We are given rare glimpses of Lucy’s past, which involve her bearing witness to domestic violence. “They used to rip each other to scraps, my parents.” Lucy’s mother tells her a harpy is to punish men for the things they do, triggering her lifelong fixation with the mythical being. The image sticks and, when wronged, Lucy digs deep into her subconscious to invoke the brutal rage associated with the harpy.

This surreal, eviscerating work of fiction lays bare the drudgery of suburban marriage and delves into institutionalised gender roles.