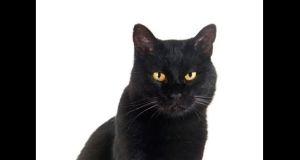 What would I be doing, licking disgusting paper, me a cat from a better class of Dublin tenement?

Nine lives but I’ve needed every one of them. Peculiar and all, the way things pan out and I’m sure me aul master, Mr Bloom, Lord rest his soul, would come up with a bit of profound thinking to try and explain the various mysteries of the universe. But then, no one could really make sense of that bloody mad book. Sure wasn’t Joyce a quare one and no mistake.

He was clever, I’d grant him that, what with his fancy lingo. Nothing could ever be described or said straightforward. There were always the bits of Latin and Greek – that it’d be the Belvo Jesuits, born nags, righteous. If a lad couldn’t master rugby football, it would be quick, make him spout the classics.

All that learning though, it couldn’t be good for a body. I mean to say, what was he doing, spying on poor Mr Bloom as he slumped in the outdoor privy attempting to do his business. Is a man to be allowed no privacy?

And there he was again, yer man Joyce, his notebook at the ready, making bath-time a spectacle, even creating an almighty to-do about the choice of lemon soap. He was just short of measuring the lather and that’s not normal behaviour. No, every little thought and embarrassing fantasy about a female bottom or ankle that went wandering through me master’s busy, tormented head, splat down there on the page for the world and his wife to get a good gawk.

As for me, well as sure as God’s my witness I never once, in any of several very long and distinguished lives, ever begged for scraps. Licking the “bloodsmeared” wrapping that the notorious kidney came home in? Ugh. Never happened.

What would I be doing, licking disgusting paper, me a cat from a better class of Dublin tenement? I made my own way as soon as I was able and one fine day wandered into No 7 Eccles Street, through the kitchen door, it was wide open, the burning of the breakfast in progress and it was far worse than the more minor incident in the book, that was to come later.

On the day I first met Mr Bloom, a few years earlier (before the damn book) there had been a blaze with lots of smoke, but me being curious by nature, in I went and I settled for good because he was kind. There he was in the middle of dealing with an inferno, the mistress screeching “Poldy!, Poldy! My tea!” and didn’t he bend down with a saucer of milk.

By then, that first day with my master, I’d already developed a grá for Guinness, that had come from hanging around public houses as a kitten, (before them scholar bowsies go wild, I’d better say, that’s not in the book and don’t try to sue me – fact beats fiction) but I’d given up the gargle when I adopted the Blooms, tragic, chaotic household, they needed me and although I cringed, I never once complained about being called “Pussens”. Pussens, Jaysus.

As I’m setting the record straight and you can never trust an artist, Joyce was a terrible man for bending the truth, I never “walked stiffly” I would have undulated gracefully. Why didn’t he write that?

I never uttered a single pathetic “Mkgnao” in any of my lives, I’m very quiet, I took the “silence, exile and cunning” bit very seriously, well leave out the “exile.” I was silent, an enigma really. He’s right about the green eyes and the “lithe black form.” But “vindictive?” Never. Only to be expected that I was a bit miffed to discover that he’d even wondered about trimming a cat’s whiskers. I declare to Jaysus, is nothing sacred!

Most important I wasn’t a she, I was, I am, a he – another little revelation bound to set the scholars feuding. Mr Bloom decided I was a she, or rather Joyce did and there was nothing I could do – until now.

Never had any interest in chasing females, there was too much of that carry on going on at home, what with the master’s head full of it, and herself, the mistress busy with that cad, Blazes Boylan. Many a time that blackguard pushed my celibate self off the bed during one of his flying visits, skirmishes I’d call them.

There was a delusional side to dear Mr Bloom, not for a minute did I consider him a tower. He stood 5ft 9½in – Joyce got that right. As for that slander about me being frightened of chickens – I deny it. Aside from me not being stupid, my general knowledge is mighty, didn’t I learn heaps from his always talking to himself.

A bit of me regrets never having sired a litter or two, then I recall Mr Bloom’s grieving for little Rudy. But I was there, wide awake, when my master and young Dedalus arrived in looking beaten by the ravages of Nighttown and the bold Bella Cohen. Then the ceremonial making of coca began. Stephen struck me as a right misery. Still it was grand to see the bit of comfort the visit gave dear Mr Bloom in his quest for a lost son, him being a melancholic, bewildered soul and me, his cat, a class of an eye witness, saw everything and more.

In conversation with Eileen Battersby