Bloomsday: It’s all about liver and kidneys at Glasnevin 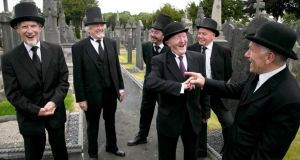 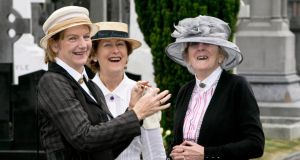 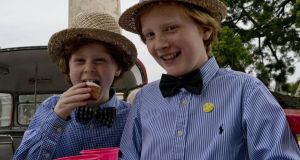 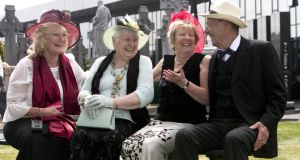 You couldn’t move in Glasnevin cemetery’s cafe without coming eye to eye with a plate of liver or a Gorgonzola sandwich. Yes, Bloomsday was in full swing and the straw boaters were out in force.

More than 100 people turned up at Glasnevin Cemetery to mark the day in 1904 on which all the action in James Joyce’s Ulysses takes place. The graveyard has good reason to get in on the Joycean action as Chapter 6, Hades, is set in the cemetery.

Many Joyce devotees came dressed in the style of the early 1900s, including Co Meath farmer Laurence Ward. He was wearing the cattleman’s coat his father wore to Dublin Cattle Market, one of the many Dublin landmarks name-checked in the book.

“I’m looking around to see if anyone else actually has a genuine relative in Ulysses,” he said. “I have two.” O’Connell Fitzsimon, “a chieftain descended from chieftains” is his grand uncle while his great grandmother was a Cuffe. In the book, Leopold Bloom recalls working for Joseph Cuffe at the cattle market when he was younger.

“They only get a one liner but it’s very honourable to find that you have a genuine relative in the book, not to mind two,” said Mr Ward. But he had another claim to fame. The cattle stick he was carrying appeared in the Michael Collins movie.

“I was there in the crowd and when Dev was making his speech I held it really high up and shook it at him. You can see it in a shot for about two seconds.”

Nelius Bresnan also came dressed in the style of 1904 with a three-piece suit and straw boater but cheerfully admitted he was no Joycean scholar. “I got about 100 pages into it and decided that this was too heavy-going for me. And I wouldn’t say that of many books,” he said. “I like to go to burlesque so I decided to dress up, have a nice breakfast, have a Guinness, go into town and gad about.”

He inadvertently ordered a full Irish special instead of the Bloomsday special so he didn’t get a chance to try the kidneys but Mr Ward polished off his plate of liver and onions and declared it to be wonderful.

After having their appetites sated with the inner organs of beasts and fowl, the crowd gathered around to watch an re-enactment of the Hades chapter by the Joycestagers before taking a tour of the cemetery.

The Glasnevin event is one of the highlights of the year for Joyce fiends Angelina and Pat McDonagh.

“I loved the film The Dead but I just read the cartoon version of Ulysses,” admitted Ms McDonagh. In an act of true love her husband soldiered through it on her behalf. “When I was going through my literary period I listened to Ulysses on tape but that’s a while ago,” he said.

Self-declared Joycean anorak Gerry Moloney from Howth said everyone should read Ulysses. “It’s a book for life,” he said. “It makes one think and reflect on what it’s all about. It’s quite philosophical as well as being very funny.”