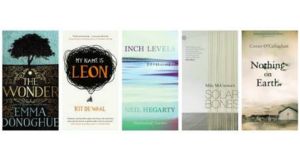 Three debut novels have been shortlisted for the €15,000 Kerry Group Novel of the Year Award 2017, which was announced today, along with the widely-acclaimed Solar Bones by Mike McCormack and The Wonder by Emma Donoghue. Perhaps the most notable novel to be overlooked is The Lesser Bohemians by Eimear McBride.

This year’s shortlist is:

Inch Levels by Neil Hegarty (Head of Zeus)
“Unsettling and thought-provoking, with just enough ambiguity and nuance to convince, this is a bold and well-crafted debut.”

My Name is Leon by Kit de Waal ( Penguin, Random House)
“A moving story of a child’s desperate desire to keep his fractured family together in early 1980s Britain. A heart-rending story of neglect.”

The Wonder by Emma Donoghue (Picador)
“The first two-thirds of The Wonder sets a superb pace, but in the final third it’s as if Donoghue novelist had had her pen taken off her by Donoghue the scriptwriter (Oscar-nominated earlier this year for her Room). Goodies and baddies begin to emerge; there’s even a love interest. The case of Anna O’Donnell comes to a close with significantly less poignancy and poetic justice than that of Sarah Jacob.”

Solar Bones by Mike McCormack (Tramp Press)
“The work of an author in the full maturity of his talent, Solar Bones climaxes in a passage of savage, Gnostic religiosity: the writing catches fire as we draw near to the void, pass over into death itself, and therein confront the truth that even in a fallen universe, when all distractions tumble away, the only adequate response to our being is astonishment.”

Nothing on Earth by Conor O’Callaghan (Transworld)
Conor O’Callaghan immediately stamps his authority on this extraordinary, low-key and pitch perfect novel and maintains effortless control in what is one of the most impressive pieces of Irish fiction writing since Neil Jordan’s The Dream of a Beast in 1983.

The winner will be announced at the opening ceremony of Listowel Writers’ Week on May 31st and will be presented with the prize. The award is for the best novel by an Irish author published between February 1st, 2016 and February 1st, 2017 and is the largest monetary prize awarded for fiction and available solely for Irish writers.

“Kerry Group is delighted to continue its sponsorship of the Kerry Group Irish Novel of the Year Award 2017,” said Frank Hayes, director of corporate affairs. “Now in its 22nd year, this prestigious award continues to recognise Ireland’s leading literary talent. The five exceptional novels shortlisted for this year’s Award will undoubtedly further Ireland’s international reputation and proud literary tradition. I commend our two adjudicators, AL Kennedy and Neel Mukherjee, for compiling this year’s shortlist which showcases a rich and diverse selection of Irish writing”.

Mike McCormack is an award-winning novelist and short story writer from Mayo. His previous work includes Getting it in the Head (1995), Notes from a Coma (2005), which was shortlisted for the Irish Book of the Year Award, and Forensic Songs (2012). In 1996 he was awarded the Rooney Prize for Irish Literature and in 2007 he was awarded a Civitella Ranieri Fellowship.

Neil Hegarty was born in Derry and studied English at Trinity College Dublin, receiving his PhD in 1998. He is the author of the authorised biography of David Frost and of The Story of Ireland.

Kit de Waal was born in Birmingham to an Irish mother, who was a foster carer, and a Caribbean father. She worked for 15 years in criminal and family law, was a magistrate for several years and sits on adoption panels. She used to advise social services on the care of foster children, and has written training manuals on adoption and foster care. Her writing has received numerous awards including the Bridport Flash Fiction Prize 2014 and 2015 and the SI Leeds Literary Reader’s Choice Prize 2014. She has two children.

Emma Donoghue was born in Dublin in 1969. She lives in Canada. Her fiction includes Slammerkin, Life Mask, Touchy Subjects and the international bestseller Room, which was shortlisted for the Man Booker and Orange Prizes and adaptated for an Oscar-nominated film.

Conor O’Callaghan is from Newry, Co Down, and lives in Manchester. He has published four poetry collections: The History of Rain (1993); Seatown (1999); Fiction (2005); and The Sun King (2013). He also wrote the non-fiction book Red Mist: Roy Keane and the Football Civil War (2004). He lectures at Sheffield Hallam University and at Wake Forest University in North Carolina.