Star Wars: The Force Awakens is the first of the franchise not to have the tie-in book published in advance. Ed Power charts the decline of a once loved but neglected genre 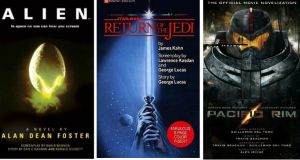 Alan Dean Foster famously wrote his feted novelisation of Ridley Scott’s Alien without having seen a reel of the movie. Indeed, it was George Lucas’s refusal to share a crucial narrative arc with Foster which led the writer to concoct a steamy romance between Luke Skywalker and Princess Leia in the official 1978 Star Wars novel Splinter Of The Mind’s Eye

Spoilers weren’t really a thing in 1983, which is why the official novelisation of Return of the Jedi was released a full five weeks before the movie. Consequently, many Star Wars fans sat down to the final instalment of the original George Lucas trilogy intimately familiar with every plot beat and line of dialogue (we hated the Ewoks before we even understood what an Ewok was exactly).Readers of the novel were, in fact, party to background nuggets not revealed in the film – such as the arguably significant tit-bit that Darth Vader became Darth Vader when Obi-Wan Kenobi shoved him into a lava pit.

Today, spoilers assuredly are a thing. Thus the forthcoming Star Wars: The Force Awakens – you may have heard about it – will be the first Star Wars movie for which the tie-in book, by veteran of the genre Alan Dean Foster, is not published in advance. Instead, an ebook novelisation is to be issued the day the movie opens in North America, December 18th, with the hardback to follow in January (a delay that will cost the publishers tens of thousands in lost pre-Christmas sales).

Such measures are, of course, standard for a Hollywood tent-pole. Franchise cinema’s obsession with secrecy obliges authors of tie-in in novels to participate in Cold War levels of subterfuge. Penning the novelisation of The Dark Night Rises, Christopher Nolan’s final Batman movie, writer Greg Cox was, for instance, required to start his book not knowing how it would end – the studio refused to show him the final 15 pages of the screenplay until seven days before the novel went to press. “I then had a week to write the ending, “ he would recall. “I was basically locked up in a Best Western in Hollywood eating Subway sandwiches.”

To an old hand such as Foster such shenanigans will carry a whiff of deja vu. He famously put together his feted novelisation of Ridley Scott’s Alien without having seen a reel of the movie – or even knowing what the eponymous Xenomorph looked like (his best guess: big and scary). Indeed, it was George Lucas’s refusal to share a crucial narrative arc with Foster which led the writer to concoct a steamy romance between Luke Skywalker and Princess Leia in the official 1978 Star Wars novel Splinter Of The Mind’s Eye. How was he to know Lucas had already decided the characters were twins separated at birth?

That movie novelisations still exist may be news to many. There was a time when practically every film of consequence was accompanied by a tie-in tome (even Clueless – itself based loosely on Jane Austen’s Emma). Nowadays the form is much diminished, being largely confined to science fiction and fantasy. That’s not to say adaptations can’t shift significant numbers – novels based on Godzilla and Man Of Steel reached the New York Times bestsellers list while, among devotees of giant fighting robots, it is widely agreed Pacific Rim the novel is considerably more accomplished than Pacific Rim the movie.

“Tie-ins are a much-overlooked sub-genre as it takes a particular kind of skill to make them work,” says Mark Stay, who adapted into a novel his own script for the sci-fi romp Robot Overlords. “I loved movie tie-ins when I was a kid. My first was the Star Wars novelisation, purportedly written by George Lucas, but of course written by the legendary Alan Dean Foster. I also loved the Star Trek books by the like of Vonda McIntyre and AC Crispin. These always had extra little gems of information not in the movies, and that’s what I wanted for the Robot Overlords book. It should enhance the film, and expand on the universe. The two should complement each other.”

Tie-in novelists are not especially well remunerated. Typically writers can expect to be paid $5,000-$15,000 (the cannier may forgo an upfront payout in lieu of a share of the profits down the line). That’s despite the considerable skill required to flesh out an often threadbare script into 300 plus pages of respectable prose. Writing any novel is hard. Writing a novel that imposes narrative coherence on a Michael Bay Transformers movie is surely a literary accomplishment worth our respect.