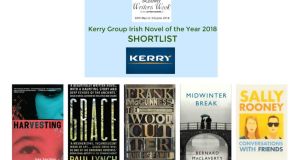 The winner will be announced at the opening ceremony of Listowel Writers’ Week on May 30th.

Two debutants compete with veteran writers on the shortlist for the Kerry Group Irish Novel of the Year Award 2018. Midwinter Break by Bernard MacLaverty, which won the Bord Gáis Novel of the Year award last November, is up against Conversations with Friends by Sally Rooney, Harvesting by Lisa Harding, Grace by Paul Lynch and The Woodcutter and his Family by Frank McGuinness.

The judges are Jane Urquhart and Alex Preston. The €15,000 for the winning author is the largest monetary prize awarded for a novel available solely for Irish writers. Selected Poems by Colette Bryce, On Balance by Sinead Morrissey and Angel Hill by Michael Longley have been shortlisted for the €8,000 Pigott Poetry Prize Award 2018, judged by Billy Collins and Deryn Rees Jones.

The winners will be announced at the opening ceremony of Listowel Writers’ Week on May 30th. This year’s festival, which runs until June 3rd, will feature Margaret Drabble, who was unable to attend last year, Edna O’Brien, Colm Tóibín, Jon McGregor and Louise O’Neill. writersweek.ie

Two world-class authors will discuss the writing process and their own work when Druid presents Alice McDermott in conversation with Mike McCormack at the Mick Lally Theatre in Galway on March 21st. The two will also give a talk at 2pm that day as part of the Druid Academy at NUI Galway. druid.ie

Michael Harding, Eoin McNamee, Audrey Magee, Marie-Louise Fitzpatrick, Joe Brennan, Julie Parsons and Catríona O’Reilly are just some of the writers and poets visiting Arklow and Blessington Libraries and other venues between now and May to give free readings, talks and writing workshops for all ages. The programme for Way with Words, Wicklow, a pilot literature project, runs in Arklow Library until March 24th and continues in Blessington Library throughout April and May. waywithwords.ie

The School of English in association with the Centre for Literary Translation, Trinity College Dublin, hosts a celebration of the connections between Irish poets and modern Greece, with Joanna Kruczkowska, assistant professor at the University of Lodz, at 7pm on March 28th,in Emmet Theatre, Arts Building, TCD. eventbrite.ie

Jessica Peel-Yates is the new manager of the James Joyce Centre in North Great Georges Street, Dublin. She succeeds Mark Traynor. Jessica’s previous Joycean credentials include her involvement in co-authoring pocket guides to Ulysses and Dubliners in the Romping Through Literature series produced by the creative collaboration group At It Again. An experienced professional manager, she also promises to bring a highly creative approach to her tenure as manager of the centre.

Sebastian Barry, the award-winning author and new Laureate for Irish Fiction, has been added to the line-up for this year’s Cúirt International Festival of Literature, which takes place in Galway from April 23rd-29th. Barry will be talking to Irish novelist Paul Lynch in the Town Hall Theatre on April 26th at 8pm.