Being New York, Being Irish: a celebration of Irish-American diaspora 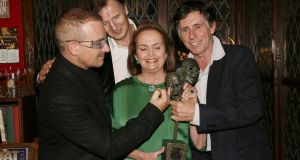 Cultural identity has always been as a major political rallying point. In recent years identity, generally cast in nationalist terms, has again become the locus of acrimonious social tensions.

Last October, the case of a Bray schoolboy, who had been born and had spent his entire life in Ireland but was due to be deported, fuelled a deeply divisive debate about what it means to be Irish, both culturally and legally. That same month, US president Donald Trump mooted an executive order to abolish birthright citizenship, in direct contravention of the US constitution. Political essentialism notwithstanding, though, cultural identity is never a simple, incontestable given.

Being New York, Being Irish, edited by Terry Golway, is a celebration of the highly influential Glucksman Ireland House, the Irish Studies centre at New York University established 25 years ago. The table of contents is a roll call of some of the best and brightest in Irish and Irish-American public life, including academics, writers, poets and political figures, who all reflect on various aspects of Irish and Irish diasporic identity.

In addition to two chapters by the editor which narrate the history of Glucksman House, the book features contributions – some new, some written for earlier occasions – by President Michael D Higgins, novelists Alice McDermott and Colm Tóibín, poets Paul Muldoon and Seamus Heaney, and academics Hasia R Diner and Maureen Murphy, as well as sundry others.

While some of the pieces are more substantial than others, as is to be expected, the book clearly demonstrates the high esteem in which Glucksman House and its founders, Lew Glucksman and Loretta Brennan Glucksman, are held. Given the institute’s instrumental role in showcasing Irish culture and popularising Irish Studies as an academic discipline in the US, as well as promoting the study of Irish-American history, this homage is absolutely deserved.

However, on a deeper level it is instructive to consider the book as a thought-provoking meditation on the nature of Irishness and the construction of identity. Lew Glucksman was himself a good demonstration of the mutability of identity. He was a Jewish-American with Hungarian roots, and as such had no hereditary claim to Irishness. Having fallen in love with the country in his teens, he later expressed his affection through organising and funding, together with his Irish-American wife Loretta, a wide range of projects, including the Glucksman Ireland House. And indeed, as former Glucksman director JJ Lee states in an encomium, Glucksman eventually became “an honorary Corkman”.

Alice McDermott’s delightful contribution about her son’s discovery of Irish trad, is another good case in point. It uses his development as a flutist and embrace of “a musical tradition that had hardly seemed our own” to explore the question of what it means to be ethnically Irish. While the essay is not entirely devoid of some cod-Celtic mysticism, in all of her work McDermott has been uniquely attuned to the vagaries of Irish-American identity, and this piece too carefully examines some of the ways Irishness evolves in diaspora.

There’s an almost off-hand remark in eminent migration scholar Hasia Diner’s reflection on Irish-American history that highlights why it is so important to think critically about identity. Diner suggests that the “legacy” of 19th-century Irish immigrants “should be seen as a bulwark against Islamophobia”. Given the fierce racism that often characterised Irish efforts to gain a foothold in US society, Diner’s discussion of the Irish-American impact on American society here is somewhat rose-tinted. All the same, Diner’s call to use heritage to promote openness rather than tribalism is highly timely.

In a recent column, Fintan O’Toole showed how in the age of Trump many high-profile Irish Americans use their ethnic history to legitimise a “reactionary mindset” that reduces cultural identity to an exclusionary political and social mechanism. Their variety of what Liam Kennedy once called the Irish MOPE syndrome – Most Oppressed People Ever – informs many of the more bilious policies promoted by Trump’s government. It’s definitely true that Irish immigrants had to overcome decades of nativism to flourish as American citizens. Yet rather than using this past as an argument for a policy of inclusiveness, many powerful right-wing Irish-Americans have co-opted the nativist rhetoric that once marginalised their ancestors.

Being New York, Being Irish shows that it is much more fertile and indeed humane to resist ethnic essentialism and instead celebrate the dynamism of identity. Its report on the many admirable initiatives at Glucksman Ireland House underscores that even if history isn’t always pretty, cultural identity doesn’t have to be rooted in antagonism, but contains by definition the potential to be inclusive and affirmative.

Christopher Cusack holds a PhD in Irish Studies. He is currently researching Irish-American and German-American identities during the First World War.