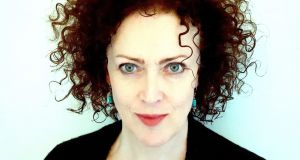 How to describe Before My Actual Heart Breaks, the debut novel by Northern-born former journalist Tish Delaney? Is it a coming-of-age tale? A love story set against the backdrop of the Troubles? The story of the Troubles played out metaphorically through a marriage in the fictional border town of Carncloon? That last one is probably the most interesting way to read it, and I will explain what I mean in a moment. First let’s look at the facts.

This book is about Mary Rattigan, a young Catholic girl trying to navigate growing up in 1970s Northern Ireland, where the “Troubles [rumble] constantly overhead like a thunderstorm”. She has a bully for a mother, a gormless father and six siblings. At school she shows potential, and dreams she will one day “grow wings and fly” – find a way to emigrate to England or the US and build a better life for herself.

Mary’s dreams of escape are cut short  and her life takes a drastically different path when she ends up pregnant out of wedlock and forced into a shotgun wedding with an older man who is not the father of her child.

In colonial disputes, national identity is often tethered to female virtue and religious morals, and what this novel does well is depict a life stifled by a war that plays out both in the surrounding landscape (bombs, shootings, funerals every other day), and through the policing of women’s bodies and life choices.

It is the militant regime of Mary’s mother – her staunch republicanism expressed through the instrument of Catholicism – that stifles Mary more than the “sickening see-saw of them and us”. “I have to be a good Catholic because of the Troubles,” Mary says early on, a declaration that grows ever more sinister as her life grows more confined and she ends up “landlocked” on her husband’s farm, giving birth to child after child, like one of his livestock.

For a long time it seems as if Mary’s life is one to pity. Her schoolfriend Lizzie, with whom she’s been “comparing sins” since First Confession, acts as a foil throughout. Lizzie achieves Mary’s dream of flying by becoming a lawyer and travelling the world. Mary is at first jealous, but then a peculiar turn in her outlook becomes the rail upon which the novel hangs.

“‘One day’ has been hanging over my head like a noose for as long as I can remember,” Mary reflects (“one day” meaning the ambitions she has fostered for things she doesn’t have). In order to free herself from this noose, she must come to the realisation that her new husband is not the evil captor, but someone just as oppressed as she.

Here is where the marriage might mimic the Troubles. Mary’s realisation – “Had we ever tried talking to each other I might have known that he was the one person who could understand, the one who’d already been on that lonely, bloodied road” – reads like the beginnings of a peace process.

While this turning point is interesting metaphorically speaking, it is a strange one in the context of Mary’s life. This book is marketed as “an unforgettable love story”. But if it’s a love story, it’s also the story of a woman who is physically abused and psychologically tortured by her mother, then forced into captivity, and who ends up falling for her captor. In another context you might call this Stockholm syndrome. In any context, this woman needs help.

For this reason, I don’t think the reader can trust any of the epiphanies our protagonist has. The sex she has aged 16, after which she becomes pregnant, is, to her “the first chance I’ve had in sixteen years to do what I want”. It should feel transgressive and feminist, but it doesn’t quite come off. The man who takes her virginity is older and in a position of relative power. In the Republic, it would be classed as statutory rape.

Later in the book there is an unambiguous rape scene, but it comes as a surprise to the reader and appears to exist for narrative closure more than anything. It feels gratuitous and implausible.

And so, while there is much to admire about this debut, from the energetic voice to the way the Troubles are knitted through the timeline, ultimately some of the narrative choices feel off. Perhaps this is an outsider’s viewpoint – the viewpoint of someone who never lived in such a place at such a time. But the redemption does not feel like redemption.

This reader wasn’t convinced by the central premise. By the end I still want Mary Rattigan to “grow wings and fly”.