Mia Gallagher’s second novel, 12 years in the making after her debut HellFire, has won over critics and fellow writers. Read along with us this month 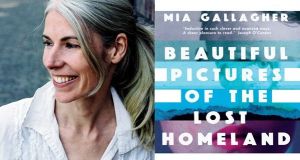 “Nothing came near Mia Gallagher’s Beautiful Pictures of the Lost Homeland for bravery and ambition this year,” wrote Mike McCormack

We will be publishing a series of articles this month exploring Beautiful Pictures... beginning on February 3rd with an essay by Daniel Bolger, commissioning editor at New Island Books.

A bomb blast in the London Underground rips through space and time, unearthing four stories that whirl, collide and pass each other by.

Sometime around now, Georgia Madden (who used to be Georgie) flees her Dublin home, embarking on a road trip spiked with the hidden dangers of her past and her present. In the 1970s, as the Madden family begins to disintegrate, a disruptive stranger arrives who will bind them, briefly. While the underground bomb ticks down, an elderly German woman, Anna Bauer, recounts her own war story to a film crew. And all along, fizzing and popping in a parallel reality, we, the “visitors”, are led through an unsettling and volatile Museum of Curiosities.

The past crosses and weaves with the present; generations are bound together and cleaved apart; future selves remember and forget who they once were. Forgiveness is sought, offered and withheld – and as they unspool, the fragmented lives of four people become a haunting whole, where time is unknowable.

Twelve years in the making, Beautiful Pictures... has gone down a storm with other Irish writers. Joseph O’Connor wrote: “I adored this thrillingly ambitious novel, which is intriguing, strange, yet seductive, too, in such clever and nuanced ways. A sheer pleasure to read”. Similarly, Paul Murray declared it “A pitch-perfect rendering of Dublin today and yesterday, a devastating portrait of a family in grief, and a haunting account of the past’s pull on the present. As thrilling and inventive, as it is moving and profound. A major achievement.” Mike McCormack, writing in the Sunday Independent, proclaimed: “Nothing came near Mia Gallagher’s Beautiful Pictures of the Lost Homeland for bravery and ambition this year. A skilful and fearless exploration of place, time and identity – it grapples the big themes to its heart. This is the Irish novel whose reputation will grow in the coming years. A new generation of Irish writers may well take their lead from it.”

The reviews have been exceptional. Sara Baume in The Irish Times wrote: “Gallagher’s writing is brilliant...Though somewhat baffling on the surface, Beautiful Pictures . . . is strangely coherent up close, like a magic-eye picture... a writer who doesn’t miss, or forget, a trick.” Sara Keating, in the Sunday Business Post, wrote: “It would have been easy for Gallagher to turn Geo’s story into a blockbuster bestseller about transgendered identity. However, Beautiful Pictures is more interested in the binaries and doubleness of personal identity; the many lives we all live that produce the fleeting present moment…Comparisons with Joyce are inevitable…a gripping page-turner.”

Claire Kilroy, reviewing for the Guardian, wrote: “There is so much to say about this novel. It is sprawling, but not sloppy; messy, but not a mess. There will be as many readings of it as there are readers. Beautiful Pictures of the Lost Homeland is challenging, it is brave, it is original, it is flawed, it is moving, it is fascinating. It is art.”

Mia Gallagher was born in Dublin, where she lives and works. Her debut novel, HellFire, was widely acclaimed and received the Irish Tatler Women of the Year Literature Award in 2007, while her award-winning short fiction has been widely published and anthologised. Mia has received several literature bursaries from the Arts Council of Ireland and has been writer-in-residence in many different environments, both at home and abroad. In a parallel universe, Mia works as a professional actor, performing in theatre, radio and occasionally film. Beautiful Pictures of the Lost Homeland is her second novel.