Beatrice Alemagna and Chris Haughton: art for all ages 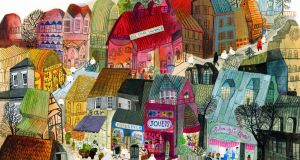 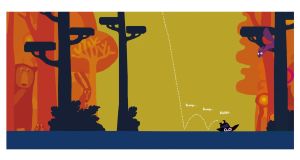 A Bit Lost by Chris Haughton 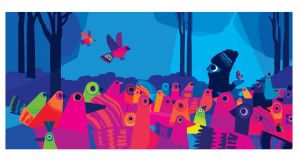 An exhibition of the work of two outstanding picturebook artists has opened at the dlr Lexicon in Dún Laoghaire, providing an opportunity to look at the work of Beatrice Alemagna and Chris Haughton outside the context of their books. Exhibitions like this are reminders that the best picturebooks are created by artists who have chosen to use their talents to create beautiful books.

Haughton and Alemagna are true artists, and between them they have created a corpus of outstanding books for young readers. So far, the target market for Haughton’s books is for very young children, while Alemagna’s work spans a wider age range and, stylistically, they are quite different.

Haughton’s work is highly stylised, drawing on a wide colour palette, to convey meaning. He has published four titles, each in his recognisable blocky style. To achieve this, he first draws his images by hand, then scans them into the computer and blocks them out in varying colour palettes, often using startling contrasts, such as the juxtaposing of red and orange tones with purple in Oh No George! (Walker Books).

Alemagna uses a wide range of different media, including watercolours, collage, pens, coloured pencils and pastels and employs different techniques, and she makes playful visual intertextual references. Each of her books is a highly original work of art, appealing to children and to adults who enjoy her quirky characterisation and sense of spontaneity.

A native of Bologna, Alemagna is a creator of picturebooks which have been translated into many languages and which have won numerous international awards for the self-taught artist and writer. When she was eight years old Alemagna decided to be a painter and an author. Now, with over 30 picturebooks to her credit, she has succeeded in realising her childhood ambition – evidence of her claim to being a stubborn character.

She loves drawing faces and developing characters, and has a passion for detail. She spends a lot of time observing children and her interest in childhood and its temporal fragility is evident throughout her work. Her most recent books The Marvellous Fluffy Squishy Itty Bitty (Thames and Hudson) and What Is a Child (Tate) evoke this, capturing the emerging individuality of the children who populate her pages.

Alemagna now lives in Paris, the setting for one of her best-loved books, A Lion in Paris. The story of a lion wandering around the city until he finds the right place for him epitomises Alemagna’s ability to enable readers to empathise with her characters, human or animal. She has written the text for most of her picturebooks, and her work portfolio includes illustrated covers for many literary classics for adults and children.

Haughton also writes his own text, which he keeps to a minimum number of words, believing that the images should do most of the talking. Colour is employed to draw attention to what he wants readers to observe. Shh! We have a Plan (Walker Books) is distinguished by predominantly luminescent shades of blue, intensifying the nocturnal escapades of a group of inept hunters. Here, as in all his books, he effectively uses characters’ eyes to give them expression and develop character.

Haughton was born in Dublin and studied at The National College for Art and Design. For more than 14 years he worked as a freelance illustrator, concentrating on design projects and on travelling, especially in Asia. In Nepal he set up a fair-trade company, NODE, in Kathmandu, specialising in rugs handmade by local workers, some of which he designs himself. In 2010 Haughton’s first book, A Bit Lost was published in Seoul before it was snapped up by Walker Books for an English language edition. The appeal of his conceptual images and clear-cut design to a Korean audience is evident in the story of a little owl who falls off his perch and becomes “a bit lost” in a forest. A Bit Lost seems like a regular home-away-from-home narrative at first. A baby owl falls off his perch, wanders around for a bit, asking inhabitants of the forest if they have seen his mother, and, eventually, he is reunited with her. But then the whole process starts over all over again as once more, the little owl falls off the perch. His most recent book, Goodnight Everyone (Walker Books), is also a night-time story. The Story of Little Bear who doesn’t want to go to sleep, and Great Big Bear who wants him to, it is enriched by end papers showing the ursine constellations in the southern and northern hemispheres in the night sky – something for older readers to consider.

This exhibition reminds us that picturebooks are not only the preserve of preliterate children, recalling the words of Randolph Caldecott, the 19th-century illustrator, who is sometimes credited with being the father of the modern picturebook. Caldecott said that a good picturebook always has something there for the adult as well as the child. He didn’t mean that children were excluded, but that older children and adults see more – and perhaps interpret a visual story differently as their understanding develops.

Young Eddie’s search for a Fluffy Squishy Itty Bitty in Alemagna’s The Marvellous Fluffy Squishy Itty Bitty as a present for her mum will resonate with adults who have been the recipients of similarly researched gifts, and will remind them perhaps of their own childhood searches for the best present ever for a loved adult. Equally, they will empathise with George, the dog, in Haughton’s Oh No, George! It’s not clear if George can resist everything except temptation, but he certainly finds it impossible to resist the nice-looking cake left by his friend Harris when he goes out. And gardeners will identify with George when he just can’t resist digging in a lovely piece of soil.

The dlr Lexicon exhibition may be an introduction to Haughton and Alemagna for some visitors. It will certainly prompt further explorations of their picturebooks, and more about these exciting illustrators will be revealed when they are in conversation with Illustrators Ireland’s Margaret Anne Suggs at noon on March 26th during the Mountains to Sea Festival. This is followed by a tour of the exhibition. Book now!

Tony Slattery: Something happened when I was very young. A priest. I was eight
4