Author, 88, from Co Clare has enjoyed a long and distinguished career since making her name with The Country Girls in 1962 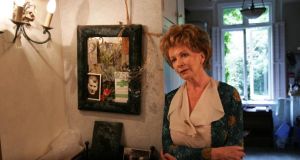 Edna O’Brien at her home in London in 2006: “Writing isn’t elitist: it’s the deepest thing we have. It’s as essential as breathing.” Photograph: Frank Miller

Edna O’Brien, one of Ireland’s finest writers, has been appointed a Dame of the British Empire for her services to literature.

The Irish author described the honour as “very gratifying”, adding: “It unites me in some etheric way to readers I don’t know and is an incentive, at 88, to keep going.”

Stephen Page, of her publisher Faber & Faber, said: “The great Edna O’Brien’s international reputation and readerships stand as a testament to her importance and originality.”

The author, who has lived in London since the 1950s, is known for her republican sympathies. Speaking of the Provisional IRA campaign, she once said: “I feel there was a justification, yes, and I believe Ireland is one country but my human side is relieved that the guerilla war is over.” While researching House of Splendid Isolation (1994), her novel about a republican paramilitary who goes on the run, she met INLA leader Dominic McGlinchey, whom she called “a grave and reflective man”.

Her literary agency said: “The honour is for her services to literature and her belief is that literature transcends politics and borders.”

O’Brien has won many awards in a long and distinguished career. Born in Tuamgraney, Co Clare, in 1930, she made her name with her debut The Country Girls in 1962, which won the Kingsley Amis Award. In 1995, she won the European Prize for Literature (European Association for the Arts) for House of Splendid Isolation; the Irish PEN Award in 2001; the Ulysses Medal from University College Dublin in 2006; the Bob Hughes Lifetime Achievement Award in Irish Literature in 2009: the Frank O’Connor International Short Story Award for Saints and Sinners in 2011; the Irish Non-Fiction Book of the Year in 2012 for her memoir Country Girl.

As recently as February the $50,000 US PEN/Nabokov Award in New York. Fellow Irish author Colum McCann, presenting the prize, said: “She creates deeply human structures in a world that so often opposes such complexities ... She refuses to live in stunned submission.” The judges, fellow writers Michael Ondaatje and Diana Abu-Jaber, chose the author, best known for her Country Girls trilogy, for “the absolute perfection of her prose” and her “powerful voice” which had broken down “social and sexual barriers for women in Ireland and beyond”.

The author, whose last novel, The Litle Red Chairs, was published in 2015, spoke of “the importance of literature, the necessity for literature in our unhinged times”. “Language lives longer than people and therefore its permanence is vital. It moves us from one generation to the next; it’s immortal,” she said. “Writing isn’t elitist: it’s the deepest thing we have. It’s as essential as breathing. It brings other paradoxes to us through language.”

Faber is to publish next yeare a new novel by O’Brien, Girl, inspired by the kidnapping by Boko Haram of almost 300 schoolgirls in Nigeria in 2014. The author spent several weeks in the country researching her story.

Her editor Lee Brackstone said: “In Girl, Edna O’Brien once again proves herself to be one of our most compassionate, stylish, and fearless novelists. The Little Red Chairs has sold over 250,000 copies in two years. In her ninth decade, Edna is producing the greatest work of her staggering career. There is no more urgent writer working today.”

Faber has described Girl as “a brutal story of incarceration, horror, and hunger; an escape into the further terrors of the forest; and a descent into the labyrinthine bureaucracy and hostility that awaits a girl who returns home with a child blighted through enemy blood. How do we survive and keep love alive in a barbaric and unforgiving world?”