‘I hope we can conceal this,’ George Patton wrote about murders of German prisoners that have been airbrushed out of US accounts of the ‘Battle of the Bulge’. We have to ask whether we might have murdered them, too, says the bestselling historian 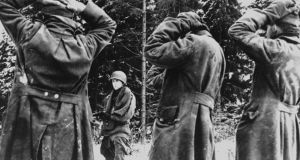 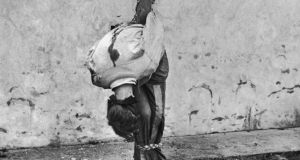 Total war: a German soldier executed by an American firing squad during the Battle of the Bulge in December 1944. Photograph: John Florea/Time Life/Getty 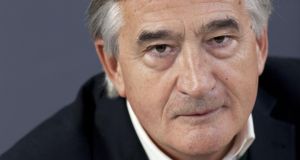 The owner of the forest at Champlon-Famenne, overlooking the town of Marche, deep in the heart of Ardennes, in Belgium, is still unable to sell timber from the huge conifers that have grown on the land since the early 1940s. The trees carry the legacy of war: shards of artillery shrapnel buried deep within the young trees in December 1944, during the Battle of the Bulge, Nazi Germany’s last offensive on the Western Front.

Seventy-one years later the author Antony Beevor, who has sold more than six million books that combine military history with personal stories, has tackled the subject of a battle marked by its brutality but since sanitised by Hollywood.

The fighting in December 1944 is best known for the killing, in the town of Malmedy, of 84 American soldiers from the 285th field artillery observation battalion. They were executed by an SS Panzergrenadier, or mechanized infantry unit, from a Kampfgruppe, or battle group, commanded by Joachim Peiper.

The Americans had been warned minutes before by locals, who screamed “Boches, Boches!”, or “Germans! Germans!”, as they drove past in open-top trucks. Not understanding, the GIs waved back, driving into the German troops after they passed through the next crossroads.

In 1948 73 of Peiper’s men were convicted for what happened in Malmedy, including 43 sentenced to death and 22 to life imprisonment. But the cold war had begun, so executing more Germans did not appeal. All were released in the 1950s.

Peiper, who was not present at the massacre, was jailed for 11 years. Later, perhaps bizarrely, he went to live in a rural village in France. In 1976 ageing members of the Resistance caught up with him. He knew they were coming but did not flee.

Beevor believes the full story of The Battle of the Bulge - a title he studiously avoids - should include, too, the killings of German soldiers by American infantry soldiers, who were quickly brutalised in a conflict without mercy.

In the days and weeks after the invasion of Normandy in June 1944, American commanders had worried that their men “didn’t hate the Germans enough”, Beevor says at his home in London. “My God, the Ardennes changed everything.”

Scores of soldiers were executed. In Chenogne on January 1st, 1945, 60 German prisoners were shot after bitter fighting. “There were some unfortunate incidents in the shooting of prisoners,” Gen George C Patton wrote in his diary. “I hope we can conceal this.”

Some surrendering Germans came within metres of American patrols before they opened fire. Some captured soldiers showed photographs of their children as they pleaded in vain for their lives. Others were taken into the forest, out of sight of locals, and killed.

Senior US officers knew the killings were taking place. Indeed, Gen Omar Bradley, who had been caught out by the German offensive in Ardennes, expressed surprise when prisoners were produced.

No Americans were prosecuted, according to Beevor. “I have not come across any examples,” he says. “There may have been one or two, but I didn’t find any.” The killings “were counterproductive, since it made the Germans less willing to surrender”.

Beevor is no stranger to controversy. Berlin: The Downfall, his 2002 book about the end of the Nazi regime, provoked fury in Russia because of its detailed portrayal of Russian soldiers’ mass rape of German women.

“With those you get quite straightforward stuff about the killings,” he says. “They were not trying to hide anything at that stage. It was the official historians later who left out what happened.

“The Americans do have a real problem, it seems to me, about the way in which the second World War is slightly sacred – the Greatest Generation and all the rest of it – which I think is a pity. It was the good war for American historians.”

Some US colleagues have told Beevor that he is being “a bit brave” by highlighting the American atrocities. “One can never predict how a book will play,” he says. “I got it wrong over Berlin and the Russians. I expected them to be unhappy, but I didn’t expect the degree. I should have, perhaps.

“Even those who had been in the gulags felt that 1945 and the victory was sacred, and nothing must touch it. It was the one moment in a century when everyone could feel proud.”

Killing prisoners is nothing new to war, he says. “Prisoners are always killed for different reasons in many wars. It is something which historians have always tended to cover up in the past, particularly about their own countrymen.”

Beevor, a former officer in the British army, says he is not judging soldiers who fought in Ardennes – which, apart from the clashes in the three-month Battle of Hürtgen Forest, a few weeks earlier, was probably the most brutal chapter of the war on the Western Front.

“Human beings under such stress are totally unpredictable,” he says. “This is why it is very, very hard to make sweeping moral judgments. Obviously, yes, it is a war crime. But we also have to ask ourselves how we would have behaved if we had been brutalised in the way that they had.”

“I was as astonished as everyone else,” Beevor says. “But history in the past had always been written in collective terms. We hadn’t realised that because of social changes in the 1980s there was more emphasis on the fate of the individual in the maelstrom.

“We had oral histories in the 1980s, but that didn’t really work, because it lacked context. You have to integrate the two.” He adds, modestly, “It had good material, but it was also a question of timing.”

And the royalties are declining. “My first version of The Spanish Civil War was not much good, because I couldn’t afford to spend the time in the archives in Salamanca. There were no advances.”

Beevor fears that changes in reading habits and illegality are “eating away at the commercial base” of publishing. He also accepts that there is a degree of anniversary fatigue on foot of a slew of commemorations of the start of the first World War.

But readers still have an appetite for understanding the second World War. “People living in a [healthy], nonjudgmental society are fascinated by a period of danger, to hear how people lived under occupation,” he says. “How would I have behaved? Would I have helped to hide somebody? It is not surprising that it grips people.”

The teaching of history has its own gaps, leaving students with a potted understanding. “For the young it is as far away as the first World War is for us,” he says. “For many of them the Battle of Alamein could be the Battle of Waterloo.”

Beevor describes the experience of a colleague who teaches medical history. During her lectures she referred to events in Napoleonic and Victorian times – then realised that her highly educated students had no idea which centuries Napoleon and Victoria lived in.

He adds despairingly that, before it commissioned Laurence Rees’s magisterial series Auschwitz: The Nazis and the Final Solution, the BBC did some audience research. Auschwitz? “Some of the young thought it was a brand of beer.”